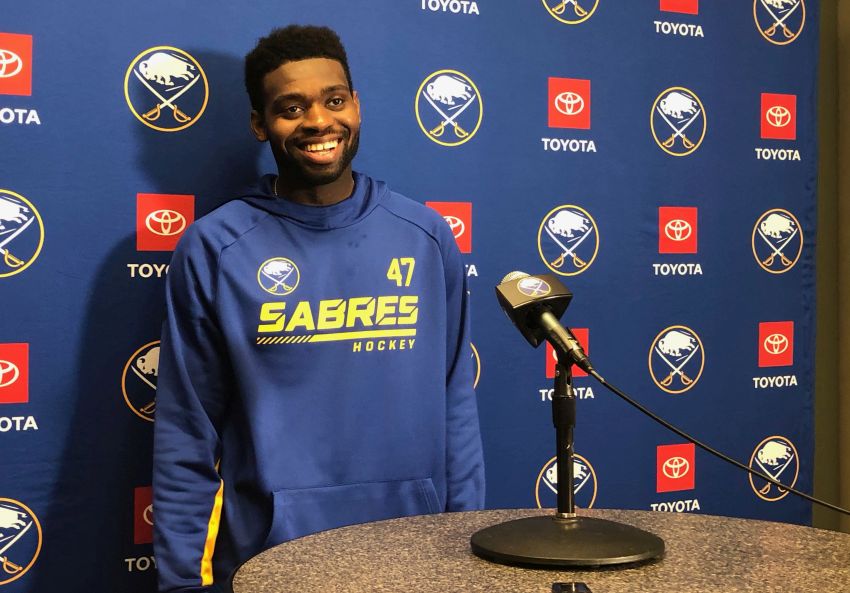 Malcolm Subban smiles after his 45-save performance Friday. ©2021

PITTSBURGH – Having spent his entire NHL career as a backup, Sabres goalie Malcolm Subban is conditioned for busy stretches like he experienced early in Friday’s 3-2 overtime loss to the Penguins.

Playing second fiddle means often receiving the worst assignments. On Friday, the Sabres completed a back-to-back and closed a dizzying stretch of three road games in four nights. After beating the Minnesota Wild 3-2 in a shootout Thursday, they arrived in Pittsburgh at 3 a.m. Friday.

The Sabres looked dog tired during Friday’s first period, and the Penguins outshot them a whopping 21-5.

But Subban’s dynamic play kept the Sabres in the contest, and they roared back from a 2-0 second-period deficit – defenseman Rasmus Dahlin scored 14:42 into the third period – to force overtime. In his second start for Buffalo, Subban made 20 first-period saves and 45 overall before Jeff Carter scored 2:53 into overtime.

“A great performance, gut check by our guys,” Sabres coach Don Granato said. “Had to battle for teammates, for the team. Subby was great in net. Big players step up and Subby stepped up early for us and gave us that opportunity to keep pushing though the game.

“Let’s face it, we get in here at 3 a.m. last night, you’re not going to be able to match the energy of the other team.”

Moments before Evan Rodrigues’ power-play goal at 5:52, Subban stopped five shots in about a 10-second span. Later in the period, he made a scintillating, behind-the-back glove stop on Rodrigues at the goal line.

The play, which was reviewed to see if the puck crossed the line, ranks as one of the best saves this season. Subban had no idea he stopped it.

“I thought someone hit my glove or something,” Subban said. “I didn’t know it was the puck. I had no idea. I went to the bench and (goalie Ukko-Pekka Luukkonen) asked if I got that with my glove. I was like, ‘Oh, I don’t know, maybe it hit the post and hit my glove.’

“I didn’t know what happened, and then I saw the replay and it was a pretty lucky save.

The Sabres earned five of a possible six points on their road trip and have compiled their first four-game point streak this season.

Subban, who’s fighting to establish himself with his new team, has almost certainly earned another start. The Sabres offered him little support in his first game Dec. 4, a 6-2 loss to the Carolina Hurricanes he exited early after suffering an undisclosed injury.

“It definitely felt a lot better than Carolina,” he said.

Subban wasn’t the only newcomer to make a strong impression Friday.

Fitzgerald, who replaced Will Butcher (non-COVID illness), spent most of the night beside defenseman Jacob Bryson, skating 16 minutes, 42 seconds.

The Sabres gave Fitzgerald the customary solo lap to begin warm-ups before Granato put him in the starting lineup against superstar Sidney Crosby.

“I was trying my best not to crack a smile there but that was surreal,” Fitzgerald said. “I grew up watching the Pens, they were my team growing up so that was cool. But just having the opportunity to be up here is awesome and I’m so grateful for that.”

Granato, who coached Fitzgerald in junior, said he possesses “complete confidence in him.”

“He knows everything that I expect as a coach and the details, and the details of the position,” Granato said. “So I knew that side of it would be effortless. And obviously he knows my belief in him.”

Fitzgerald said he felt “a lot of adrenaline in the first period.”

“I was a little bit jumpy but I think after a few shifts got to settle in there and just play my game,” he said. “Obviously, it was a packed house, that was cool. Looking around at first, get a couple of shifts under my belt there and really sink into the game was fun.”

Sabres center Tage Thompson also fought Zach Aston-Reese in the first period after winger hit Bryson from behind into the boards.