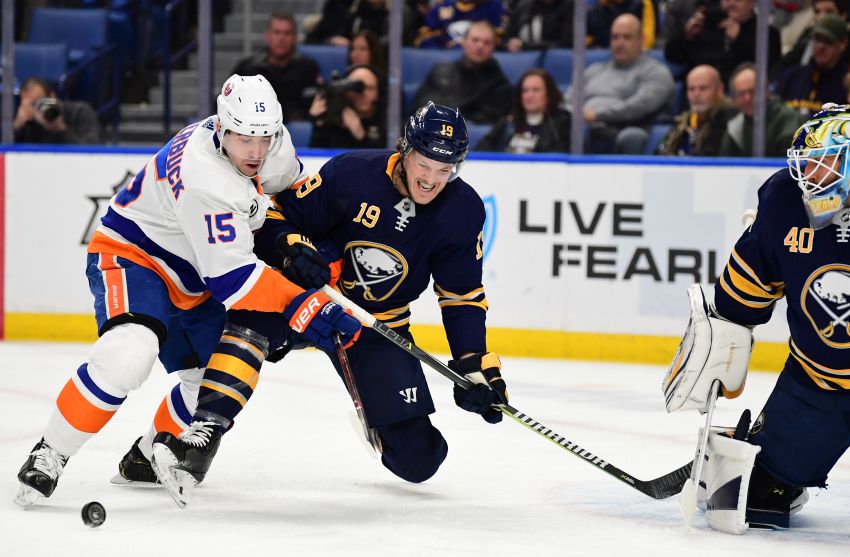 BUFFALO – Three straight losses. A rough stretch in which they’ve dropped 11 of 15 games. An anemic offense that has produced just five goals in the last eight contests.

The Sabres closed 2018 like the opened it, struggling to win games and score goals.

Of course, the Sabres are a much better team today than than they were a year ago, when they finished dead last. Thanks to their 10-game winning streak in November, they planted themselves in a playoff spot they haven’t relinquished yet.

And while any injury to Eichel should concern the Sabres – he was a game-time decision after having a maintenance day Sunday – coach Phil Housley said he doesn’t believe it will keep the slick center out long.

“It’s just one of those things I think he sort of aggravated,” Housley said.

While the Sabres have played well recently – it’s hard to quibble with most of the last two games – they’re inability to convert scoring chances keeps costing them dearly.

Clearly, the shine has come off the NHL’s biggest surprise. The Sabres are in a four-week rut and have a slew of teams, including the Islanders, who have won four straight contests, coming for them.

“This is testing us,” Housley said. “Mentally, we’re going to have fight through this, and when I say that, I really like our game, especially the last two games. We got to continue to grind it out and stay the course and not break.”

Against the Islanders, the Sabres generated plenty of offense, pumping 40 shots on old friend Robin Lehner, who performed splendidly in his first visit back to Buffalo.

“He played a really good game, you’ve got to tip your cap to him,” said Sabres winger Kyle Okposo, who scored his first goal since Nov. 13. “We saw it when he was here when he used to play against Ottawa. Tonight I thought he did a good job, he stole the game for them. I thought we got to the net. He just made one more save.”

Thanks to a second-period goal by Nick Leddy and a third-period score from Brock Nelson, whose shot skipped in off Sabres goalie Carter Hutton’s glove, the Islanders went up 2-0 before the capacity crowd of 19,070 inside KeyBank Center.

“The start of our third period, even though we got down two, the guys responded in the right way and the fought to the end,” Housley said. “It’s one of those things, we’re throwing everything at the net. Their goaltender made some big saves. Pucks were going through him but they weren’t going in the net.”

Okposo responded on the power play, ending his 21-game goal drought by whistling a wrist shot from high in the right circle past a screened Lehner.

“That’s a great shot by Okie,” Sabres winger Tage Thompson said. “Before the faceoff he told me he wanted me to screen short-side and he put it exactly where he wanted it. I just pretty much had to stand there.”

Okposo said: “It was a great screen by Tommer. He didn’t see it so he couldn’t stop it.”

Housley, who moved Okposo to the fourth line, said he “played a really strong game.”

“He was heavily involved in the offensive zone, he was skating, he was hard on the puck,” Housley said. “That’s good to see him get rewarded.”