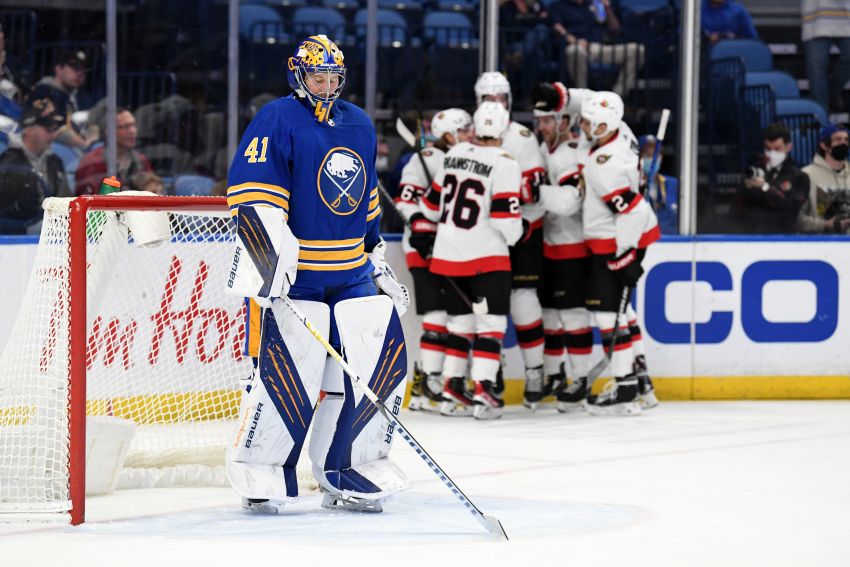 The Senators celebrate a goal on Craig Anderson in Thursday’s win. ©2022, Micheline Veluvolu

BUFFALO –Fresh off consecutive wins for the first time in two months, the Sabres apparently started feeling a little too good about themselves.

Never mind they were only their 15th and 16th victories this season. Never mind the Sabres haven’t had even a three-game winning streak in four months.

“We’ve come in here a lot, we talk about young this, young that,” coach Don Granato said following Thursday’s 3-1 loss to the Ottawa Senators. “This tonight was that to me. It felt like, OK, we won a couple games and we can just flip a switch on.”

That mentality resulted in the Sabres’ second loss to the Senators, another rebuilding team, in three weeks.

In a dull, sloppy affair that featured eight power plays in the first two periods, the Senators outworked the sluggish Sabres.

Still, the Sabres opened the scoring, getting a power-play goal from winger Kyle Okposo, and began the third period tied at 1.

“They took the game over in the third because there was an accumulation on the wrong side,” Granato said. “We didn’t get pucks where we could pursue them. We made the game much more difficult on ourselves.”

He added: “It was just finally the tipping point, they finally got the edge. It was a little ugly from there.”

How ugly was it?

Incredibly, the Sabres did not record their first shot on goal in the third period until 15:08. The weak shot by defenseman Rasmus Dahlin earned a Bronx cheer from the season-low crowd of 7,026 fans inside KeyBank Center.

The Senators registered their first shot in the third period nearly eight minutes in.

The opening 40 minutes featured little flow. The Sabres had six power plays and, yes, Okposo scored 13:37 into the contest, his third goal in the last four games. But the Sabres generated little on most of their man advantages.

“We had not enough work ethic, not enough compete in those and it carried into, it bled into the five-on-five game from that point,” Granato said.

Granato said the Sabres had some possession and did some nice things on the power play.

“But did we bear down, did we compete well enough?” he said. “Were we willing to score an ugly goal, a gritty goal? No, we weren’t. And that accumulated and it caught up with us in that game.”

Okposo said “the whole game was a little jumbled.”

“Not a lot of flow in the first two periods,” said Okposo, who beat goalie Anton Forsberg down the right wing. “But I just think that they were more committed to their game plan. I give them a lot of credit, all they did was work all night. They just chipped the puck in and worked and stayed above us and didn’t allow us to use our speed and they stuck to it all night.”

Senators winger Zach Sanford tied it 16:04 into the second period, connecting in front of Sabres goalie Craig Anderson after old friend Tyler Ennis backhanded him a pass from the right wing.

Anderson, 40, faced the Senators for the first time since he left Ottawa in 2020 following a splendid 10-season run.

The veteran, one of the franchise’s all-time greats, joked he was “giggling most of the time” Thursday.

“What happens is the players change,” said Anderson, who made 25 saves. “That’s what happens every year. Players change but the staff usually stays the same. So, spent a good eight, nine years with most of those guys, the staff members over there. It was just good to see them, smile at them.

Anderson said Tkachuk asked him how much money he put on the board.

“Clearly, I didn’t put enough,” Anderson said. “So maybe next time we’ll get it.”

One thought on “Sabres lay egg in loss to Senators: ‘Not enough work ethic’”