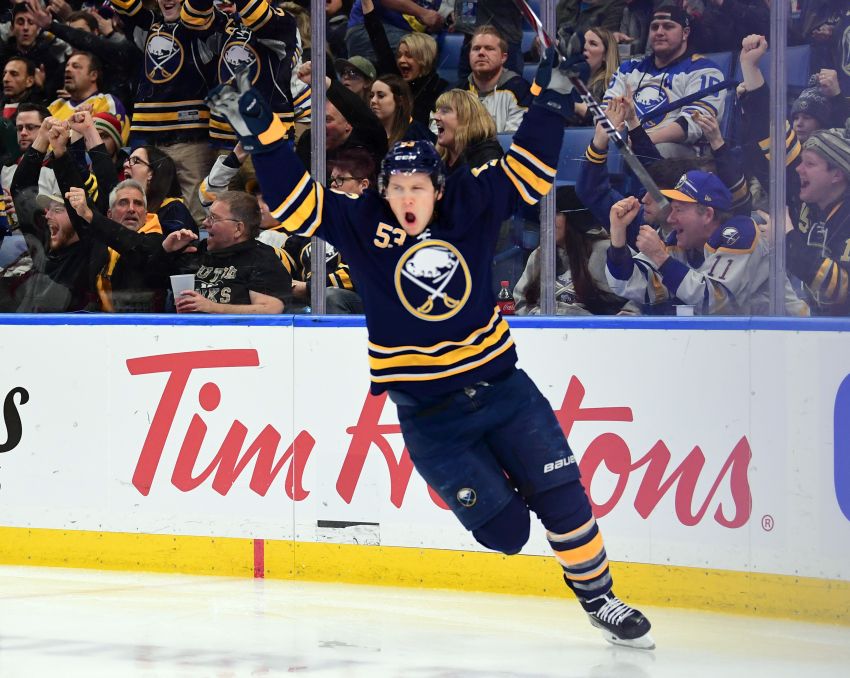 Jeff Skinner has been celebrating a lot this season. ©2019, Hickling Images

BUFFALO – Sabres winger Jeff Skinner knows returning to Carolina, where he became the face of the Hurricanes over eight seasons, will have special meaning.

Skinner, 26, was a star from the get-go in Raleigh, scoring 31 goals and winning the Calder Trophy as a rookie in 2010-11. He surpassed the 30-goal mark two other times.

During some lean seasons, Skinner, who has already scored 29 goals in 43 games, was usually the Hurricanes’ most popular and exciting player.

So when reporters asked Skinner about facing his old team for the first time tonight, he refused to downplay the meeting.

“It’s not just another game,” Skinner said Thursday inside KeyBank Center. “Technically, it’s another game on the schedule, it’s worth the same amount of points. But personally, I’ve spent a lot of time there and made a lot of friendships with people in that organization.

“First time I’ve been back as a visiting team player, I think it’s going to be … I don’t know. I don’t really know what to expect. I think it will be fun.”

He added: “There will definitely be some emotions, I think. But it’s just sort of part of life. I think you have to find a way to sort of channel it, I guess, and use some of it to your advantage.”

The Hurricanes annually ranked among the NHL’s bottom-feeders with Skinner. They haven’t made the playoffs since 2009, the only active drought longer than Buffalo’s.

“It’s been cool,” Skinner said of joining a new team. “For me, coming to Buffalo, it’s been a new experience – a new fan base, new teammates, a new organization. Everyone’s made me feel real comfortable from the beginning and it’s continued. It’s a good feeling.”

Last month, in an interview with Triangle Business Journal of Raleigh, owner Tom Dundon said the Hurricanes were looking for a “sniper.”

Hmm, they had one not too long ago.

Skinner, an unrestricted free agent following the season, has been an electrifying presence. He has scored 23 even-strength goals and seven game-winners, both league highs. Washington Capitals superstar Alexander Ovechkin is the league’s overall goal leader with 32.

At his current pace, Skinner would score 55 times over 82 games. Only four Sabres – Rick Martin, Danny Gare, Pat LaFontaine and Alexander Mogilny – have hit the prestigious 50-goal mark. No one has done it since LaFontaine and Mogilny in 1992-93.

A goal tonight would make Skinner the Sabres’ first 30-goal scorer since teammate Jason Pominville in 2011-12.

Hitting that mark is always special. To do it against your old team would probably make it extra sweet.

Sabres coach Phil Housley spent the first eight seasons of his Hall of Fame career with the Sabres before moving to the Winnipeg Jets. He understands how difficult a homecoming can be.

“You can prepare all you want for it, but until you get there and you get on the ice and you’re facing your ex-teammates, it gets a little emotional,” Housley said. “He’s going to have to manage that. Obviously, he’s had some really good years there. …

“We know the importance of this game for him, so we’re going to try to do everything possible for him to help him through it. But at the same time, it can be an exciting time. He’s done a terrific job, is a good teammate here, contributing offensively, doing everything that we asked of him.”