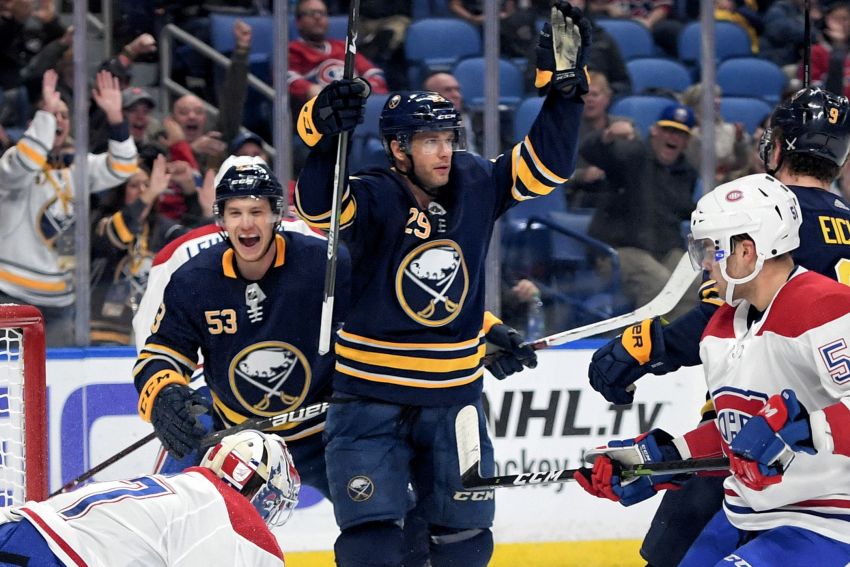 BUFFALO – Of all the places it could’ve been played, it turns out Jason Pominville will hit the prestigious 1,000-game mark tonight in Ottawa, the site of the winger’s signature moment, the dynamic short-handed overtime goal against the powerhouse Senators that pushed the underdog Sabres into the 2006 Eastern Conference final.

“(I) had some great, great moments there, probably my best moment as a player there,” Pominville said earlier this week inside KeyBank Center. “The odds of it being there is crazy.”

So were the odds Pominville would score a huge NHL goal that season. He had cleared waivers months earlier, meaning every team passed on him, and quietly returned for his fourth season with the Rochester Americans.

At that point, Pominville had played one NHL game.

In an organization loaded with prospects following an NHL lockout, nobody talked much about Pominville, a former second-round pick with two 30-goal AHL seasons. Rookies Ryan Miller, Derek Roy and Thomas Vanek all overshadowed him.

“He was a great player and he did a lot of nice things, but he wasn’t one of the top guys,” former Sabres goalie Martin Biron said of Pominville. “When the next year started, you knew he was close, but … you didn’t think he’s one of the top guys from Rochester that’s coming in that’s going to get a job.”

But by late that November, after scoring 19 goals in 18 AHL games, the Sabres promoted Pominville for good.

How many rookies kill penalties in overtime of a road playoff game against the NHL’s highest-scoring team?

After the Senators won the draw, Roy grabbed the puck in the left circle and one-handed it to Pominville, who took off down the ice seconds away ending the Eastern Conference semifinal.

At first, Jason wanted to follow his father, who attended two NHL training camps with the Oakland Seals, and tend goal.

“When he was young, he wanted to be a goalie, but I told him, ‘You’re not going to play goalie,’ because he was a good skater,” Jean-Marie said.

So Jean-Marie told his son to play forward on the ice and he would buy him a pair of street hockey pads.

Hockey consumed Pominville as a child growing up in Montreal. Jean-Marie said Jason never had many other interests. He and Deborah tried to explain to Jason he needed something else if hockey did not work out.

But Pominville kept developing into an NHL prospect. In 2000-01, he scored 46 goals and 113 points in 71 games with the Quebec Major Junior Hockey League’s Shawinigan Cataractes. After the Sabres drafted him 55th overall in 2001, he compiled 57 goals and 121 points in 66 games in his final junior season.

In 2002, he joined the Amerks and moved into a basement apartment in Brighton with Peters, a tough guy in his third AHL season.

“You had two different personalities living together, I can tell you that much,” Peters said.

While both are affable, Peters possesses a much larger personality. Back then, their routines couldn’t have been more different.

“Pommer is a creature of habit and detailed,” Peters said.

Pominville was regimented, preparing the same way for each game.

“I was just a nonchalant guy,” Peters said. “I just played hockey, I didn’t do a pregame nap, I didn’t care what time I ate.”

He added: “That same routine is what has kept him playing so long.”

Looking back, Peters, who retired in 2011, wishes he had adapted Pominville’s routine.

“I might not have necessarily been a better player, but I might’ve played longer,” Peters said.

Pominville, 35, possesses one of the most impressive resumes in Sabres history.

In Tuesday’s 2-1 overtime loss to Calgary, Pominville recorded an assist, his 500th point with the Sabres, tying him for ninth in franchise history with Danny Gare.

Imagine if his only appearance with the Sabres had been Dec. 27, 2003, his NHL debut. Pominville said he probably wanted to get claimed when the Sabres waived him.

“But thank God I didn’t and it ended up this way,” Pominville said. “I never really envisioned myself for playing for any other team.”

Overall, counting his time with the Minnesota Wild, Pominville has scored 282 goals and 706 points in the NHL.

Pominville’s skills won’t wow you. Think of him as being above average in all facets of the game. Combine that with his supreme smarts and you have perhaps one of the NHL’s best two-way forwards of the last 10 or 15 years.

Biron said: “He doesn’t have great size (about 5-foot-11), but he’s strong on the puck. He doesn’t have blistering speed, but he’ll turn it on just enough to be like a burst he can keep up.”

Pominville’s smarts have helped him adjust over the years and thrive at an age when most players have left the NHL.

“Any situation, I’ve been able to adjust because of that,” Pominville said. “Hockey sense is a big part of that, an asset to have. It’s not something you really teach, it’s mostly a tool you can have and develop.”

Biron believes Pominville’s shot is his most underappreciated asset.

“He doesn’t have the big slap shot … but his shot is so deceiving, it’s kind of like a little slap to the puck with a straighter blade. There’s a release that’s really quick.”

He added: “It’s not hard, it’s not like spectacular.”

Biron said Pominville’s shot “is really significant to what he is as a player.”

“Very underrated, very surprising, understated,” Biron said. “But it’s so efficient and it’s so good, and that’s been a tool of him for a long time.”

Pominville has occasionally shown signs of slowing down in recent seasons. In 2016-17, his fourth full year in Minnesota, the Wild occasionally scratched him. Minnesota traded him back to the Sabres on June 30, 2017.

But right now, Pominville is a first-liner beside Jack Eichel. The veteran has five goals and 10 points through 12 contests, including four goals and nine points during his current five-game point streak.

There’s another reason Pominville, who captained the Sabres for almost two years, has played 14 seasons and will become the 327th NHL player to reach 1,000 games.

“He’s just a nice person, classy, very high character, good morals,” Peters said. “But he’s a good person. I think that, too, played into the longevity of his career.”

As Pominville roared through the neutral zone that night inside Scotiabank Place, he cut to his left and heard his bench yelling he was approaching a forward.

That forward was Daniel Alfredsson, one of the NHL’s biggest stars.

“If he didn’t already know the guy in front of him was Daniel Alfredsson, he realized quickly and decided to turn on the jets,” Biron said.

Pominville kept skating, burned past Alfredsson in the left circle and cut to the net.

To this day, Pominville said he doesn’t know why he approached the play so aggressively.

“Most times when you’re killing penalties … you don’t go for it, especially in the playoffs when you’re in overtime,” Pominville said.

When Pominville reached the net, he tucked the puck past goalie Ray Emery’s glove along the ice to give the Sabres a 3-2 victory.

“(I went) kind of blank after that until I saw Jay McKee hopping out of the penalty box,” Pominville said. “The whole team jumping together was pretty cool.”

In the press box with Jeanneret, a stunned Peters, a scratch that night, couldn’t believe what he had just watched.

“Jason Pominville had just put our team on a platform that nobody expected us to be on,” Peters said.

“You’re just going out there and making a hockey play, hockey read, something that you see,” Pominville said. “But, yeah, I mean, now with a step back you realize how big a goal it was for the team and the organization.

“I mean, R.J. probably helped out, too, with the call of it. But, yeah, it’s probably a goal that we’ll see running around for a little while.”