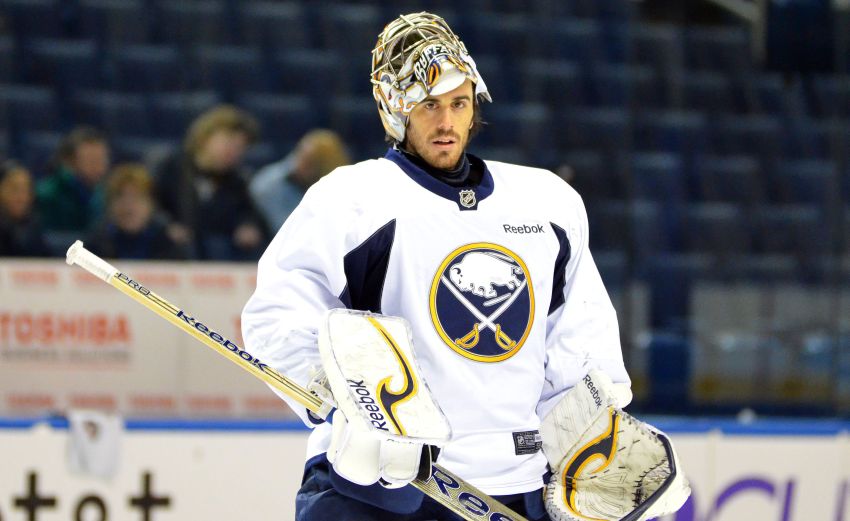 BUFFALO – Of course, Ryan Miller’s renting. Why would the Sabres goalie, the subject of rampant trade speculation and an unrestricted free agent following the season, purchase another home right now?

Miller’s decision to put his Buffalo townhouse on the market during the spring, just when it appeared his long Sabres career would be ending, certainly raised eyebrows. He understood it wouldn’t look good to locals.

But the 33-year-old insists he wasn’t bailing on the city or his team.

“It does look like it’s like, ‘OK, I’m out of here,’ and people are going to believe it or they’re not going to believe it,” Miller said Wednesday inside the First Niagara Center as the Sabres reported for training camp and underwent their physicals. “I thought it was a smart business decision to have it on the market in the last year of my deal so I didn’t at least get low-balled.”

“One person didn’t lowball me,” he joked. “They have the house.”

Miller could buy another home here someday, though. Four and a half months after the former Vezina Trophy winner seemingly played his 500th and final game for the Sabres, he’s back for an 11th season, talking about the future and becoming part of the solution for the rebuilding club, which has missed the playoffs four of the last six seasons.

“I’m not racing out of town,” he said. “It’s just honestly a business decision. If I was going to have an extension, I want to have a house that would support a family.”

He added: “(General manager Darcy Regier) has to build a team, and maybe he feels that he wants me here. I’m happy to be here, obviously. I have a great connection with the city.”

Miller began experiencing that special connection again after returning to town last week. Some of the same fans who possibly jeered him and wanted him run out of Buffalo late last season have graciously welcomed him back.

Make no mistake, he said understands the fans’ frustrations.

“They’re losing a little bit of patience,” Miller said. “But you start to see a situation here where you can build something good, something that’s going to last. That’s what I want to be a part of, whether this is the last season I can make a difference or it’s going to continue forward. I just want to make sure that I’m a positive influence on this team moving forward and that Buffalo has a lot of success or a foundation to build success on in the future because I do care about this area and the people.

“I do believe they deserve to be cheering for a team deep into June. My hope is that we can do that this year.”

Miller hasn’t discussed an extension yet, although he’s open to it.

Meanwhile, leading scorer Thomas Vanek still wants to see how the season plays out. The slick winger, another 2014 free agent many believed the Sabres would deal this summer, has said he doesn’t want to participate in a long rebuild.

“Their demeanor around here, they seem to be kind of lighter in terms of maybe getting through the summer they thought something was going to happen,” Rolston said.

He’s not worried about the stars’ uncertain status becoming a distraction.

Regier said the window for trading the two is “closed” right now. “The lines go dead” after unrestricted free agency and a short secondary market in July, he said. By training camp, most teams are evaluating their own players.

“The season begins and talks starts again, and in most cases not a lot happens until you get closer to the trade deadline where it ramps up again,” Regier said.

At least one Sabres veteran sounds ready to re-sign, however. Winger Steve Ott, whose contract also expires after the season, said his agent had “preliminary talks” with Regier last month. Regier called them “conceptual.”

“Obviously, I want to be here,” said Ott, who believes the Sabres will make the playoffs. “I love the organization, the sense of where it’s going, the young guys, the stable full of prospects.”

The 31-year-old is willing to wait a bit for the opportunity to win.