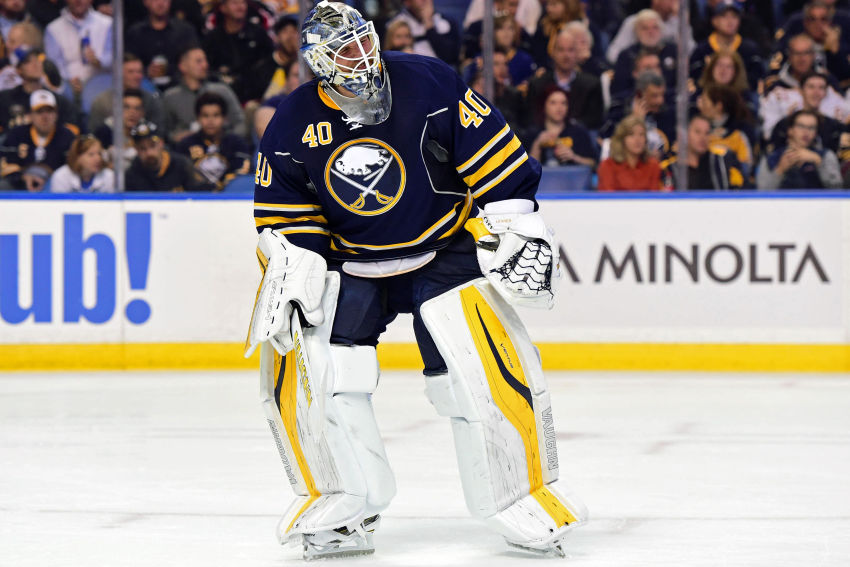 BUFFALO – Robin Lehner still has no firm timeline for his return to NHL game action. Right now, the Sabres goalie just plans to keep practicing, something he did with his teammates Tuesday for the first time since suffering a high right ankle sprain Oct. 8.

Still, Lehner knows he should be back soon, and that’s a good feeling for the Swede, who has played only 32 minutes since Feb. 16, when he suffered a season-ending concussion with Ottawa.

Just being on the ice with his teammates inside the First Niagara Center as they prepared for tonight’s road game against the Washington Capitals was special.

Lehner, 24, said he’s 100 percent and “can pretty much do whatever,” although he still has “a little issue around my right post” that is improving. High ankle sprains are widely considered the worst injury a goalie can suffer.

After Lehner was injured opening night in his debut as the new starter, the Sabres said he would miss six to 10 weeks. Lehner said Tuesday he knew then it would probably be closer to 10.

He said he felt like 100 percent around the eighth week but suffered a “little setback.” Thursday will mark 12 weeks since he was injured.

With Lehner sidelined, rookie Linus Ullmark, a fellow Swede, has emerged as the Sabres’ potential goalie of the future.

“I’ve been impressed,” Lehner said. “He’s a true professional and a great guy.”

In the Sabres’ 2-0 home loss Monday, the Capitals were clearly irritated by winger Nick Deslauriers, whose second-period hit on Justin Williams left the winger bloodied when his own stick hit him in the face as he fell down.

Michael Latta fought Deslauriers, and the Sabres’ best scrapper threw his arms in the air and yelled after he soundly defeated Latta, who was injured.

Scrums materialized throughout the rest of the chippy game.

There could be more fireworks tonight. The Capitals recalled tough guy Zach Sill on Tuesday.

“I think the reason why they weren’t happy with him is a good thing for Deslauriers,” Sabres coach Dan Bylsma said. “He played a hard game. He played hard on their good players.”