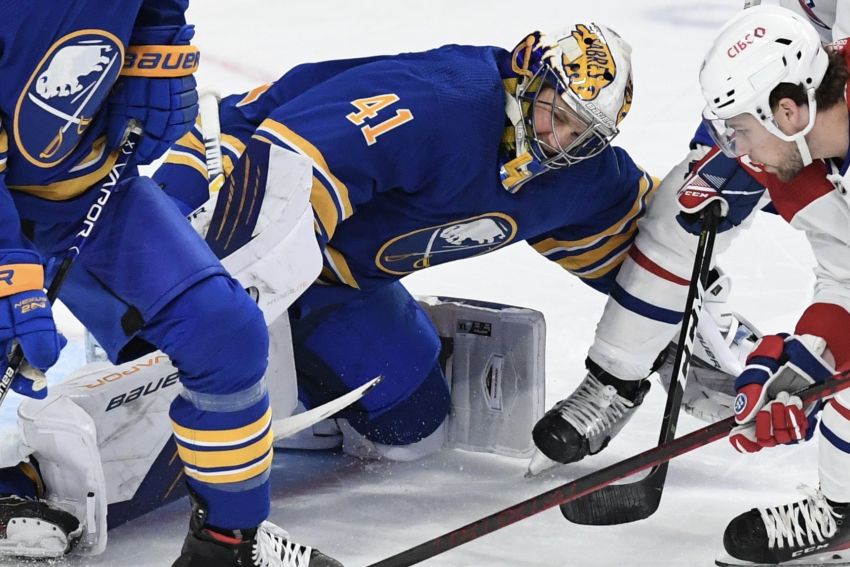 BUFFALO – Craig Anderson has never had a timetable for his recovery from an upper-body injury. The Sabres goalie has experienced good days and bad ones and starts and stops over the past 11 weeks.

Anderson, 40, said he’s still working through the injury, believed to be around the head or neck area, that has sidelined him the last 30 games.

But Anderson might’ve turned a corner Friday when he practiced for the first time since he was injured Nov. 2. He took shots and participated as the Sabres prepared for this afternoon’s game against the Philadelphia Flyers at KeyBank Center.

Anderson, who has won four of his six starts this season, figured it was time he joined his teammates for a session.

Of course, given the nature of his injury, Anderson understands he might endure bumps on his road back to the lineup.

“There might be days where I know I can’t go on the ice and it’s just going to flare up,” he said. “We’re taking it day by day and right now we’ve kind of found a routine that works to kind of give me some relief to get out there. As I get moving out there, the pain does subside so that is a good sign for myself to know that once we get warmed up and moving, I do have less pain.”

“It’s been a lot of long days here, going through treatment, the off-ice stuff, so just getting out there with the guys and realize that hockey is fun and puts a smile on your face when you’re out there having fun with them,” he said. “It was good, it was an eye-opener, haven’t been on the ice for a while so rhythm and timing, conditioning, etc., that’s all coming into play here.”

Anderson hasn’t played since Sharks center Tomas Hertl ran into him in the Sabres’ 5-3 loss in San Jose.

“I had some pain going before that but, yeah, Hertl running into me kind of was the icing on the cake,” Anderson said.

Despite the injury, Anderson completed the game and backed up Dustin Tokarski two days later against the Seattle Kraken.

“It kind of calmed down the next day and I was feeling pretty good there in the morning skate and then during the game on the bench there against Seattle, I was like, yeah, there’s something definitely wrong,” Anderson said. “We’ve got to do something about it.”

Early in his recovery, Anderson felt too much pain and knew he couldn’t skate.

“It was pretty consistent for probably the first six to eight weeks, you’re kind of like all right, there’s no chance of me getting out there,” he said. “Then we started jumping on the ice, I guess, right before Christmas and it was like, ‘Where we at?’”

But Anderson said he “was still in quite a lot of discomfort.” So he and the medical staff decided to ramp up his therapy and focus on getting healthy.

“We’re at that point now after another three weeks off the ice again, between COVID, Christmas break, etc.,” he said. “Now we’re at the point where I feel I can go out there and be productive on the ice. … I’m trying to get to the point where I feel comfortable in net seeing pucks and not worrying about the injury or feeling pain.”

Anderson said he probably needs five to seven practices to get in game shape. At the end of that phase, he said he must face a lot of shots and “really push the conditioning.”

“A lot of it right now is seeing pucks, getting the rhythm back,” he said. “It’s a lot different when you’re seeing coaches flip pucks at you, going through some movement drills, versus full-on, full speed, odd-man rushes, guys coming to the slot with the puck.”

Sabres coach Don Granato said Anderson’s recovery is “all on him at this point.”

“With a guy like that, if he’s 20 years old, you’re really in constant communication with the doctors at that point and try to help the guy,” he said. “Craig knows. He’s been in this and he knows what’s going to be expected of him as a No. 1 goalie to come back into this league. There’s nothing I can tell him other than support him, which we all do around here.

“If he’s ready to go, he’s earned that net and he’ll be back in that net.”

Anderson performed splendidly in his limited action this season, compiling a 2.50 goals-against average and a .921 save percentage.