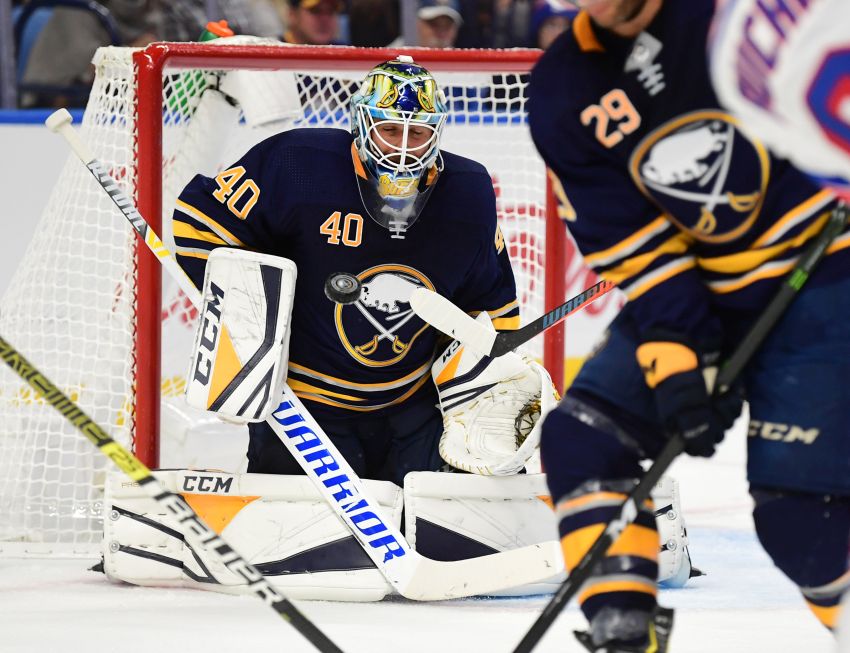 BUFFALO – In just a few weeks, goalie Carter Hutton has already instilled loads of confidence in the Sabres and established himself as one of the team’s strongest voices.

Well, for starters, Hutton often looked dynamic making 43 saves against the New York Rangers in Saturday’s 3-1 win. He even stymied a three-on-zero break, a stop that will probably be remembered in these parts for a long time.

The loquacious Hutton also isn’t afraid to say what’s on his mind. He experienced a lot during his first nine years as a pro, consistently improving while playing in five organizations.

“He’s a very good veteran and he says the right things in the room,” Sabres coach Phil Housley said Sunday. “He’s a very likable guy. But at the same time, he says what’s on his chest. It doesn’t matter if you’re a veteran or rookie, he’s just going to leave it out there. I think the guys respect that. He’s provided us with some very good leadership.”

The Sabres want Hutton to become their backbone and help change the culture of a team with recent history of losing and a slew of new faces. That’s why they signed the UMass Lowell product to a three-year, $8.25 million contract on July 1.

“It’s more important they trust me,” Hutton said. “You always have to earn it, you got to play well, you got to battle. I think early on, just showing how hard you work and the way you carry yourself goes a long way.

“It’s obviously just a start, but I think that’s the biggest thing here. I think we’ve talked about it a ton, just trying to get a better culture and just getting everyone on the same page.”

Yes, it’s very early. But so far, Hutton’s impact in his first days as an NHL starter has been notable.

Hutton keeps things calm by talking a lot on the ice.

“That’s when I’m playing my best,” he said. “I like to have fun and enjoy it. It is what it is. There’s obviously a lot of pressure that comes with our position, our sport. But I don’t try to really overthink it. I just have fun with it.”

Hutton believes it’s easy to acclimate to a new team. Most hockey players, he said, share the same qualities.

“You go team to team and most guys are pretty similar, right?” he said. “You have your different kind of cultures and stuff, but for the most part, most hockey guys are similar, mostly down-to-earth people. So for me, I just try to embed myself in it right away.”

Of course, given the dues the undrafted Hutton paid to reach where he is today, his teammates might’ve had a healthy respect for him before he arrived.

“He puts the work in, he’s a professional,” Sabres winger Kyle Okposo said. “He’s worked for everything he’s gotten in his career. I think that’s a testament to him, his mindset and the way that he prepares, the way that he believes in himself.

“He’s really got that confidence in himself. It definitely shows in the way that he plays.”

Hutton earned his first NHL appearance in 2012-13, his third full pro season. He played a career-high 40 contests with the Nashville Predators a year later.

Still, he did not crack the 30-game mark again until he played 32 times with the St. Louis Blues last season. That terrific campaign – he posted an NHL-best 2.09 goals-against average – landed Hutton his starting gig.

“You look at the way he’s climbed up in the NHL, he’s mainly been in the backup role and now he’s been put to the forefront,” said Housley, who knows Hutton from his days as a Nashville assistant. “It’s a different kind of mindset that he has and he’s got to regain that focus. When he’s playing, he’s a really focused individual. But it says a lot about him and his work ethic to get where he’s gotten.”