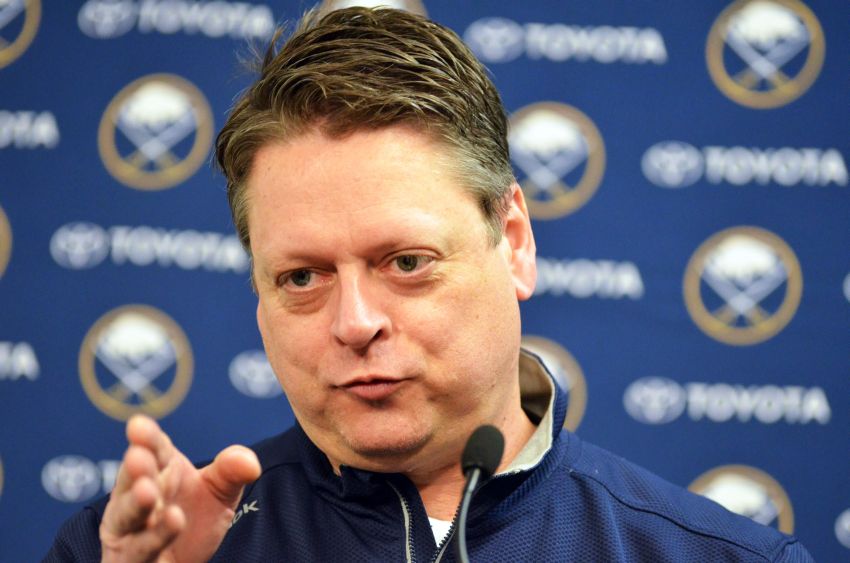 On if today was a good day:

On how far he is into the Sabres’ rebuild:

“I’m not done. This may be the roster we have for five years depending on who’s a coming free agent or whatever. But we have to add players. We have to create inner-competition, and this is the start of it. So the start of building, for me, was Friday (trading Ryan Miller and Steve Ott), and today was a continuation of it. There’s still a lot of building to do.”

“We need young forwards. The two forwards we got, we really like their future. … So it wasn’t a position thing, it was the two players. I didn’t come into today expecting to trade draft picks.”

“He was a free player. He didn’t cost us anything. He cares. He’s a good person. He’s a competitive guy. He can skate. There’s lots of things I like about him on the ice. He’s what I like to call a good complimentary player. If we had better players here to surround him, he’d be a better complimentary player.”

On dealing Halak, a goalie the Sabres acquired Friday:

“I would’ve considered keeping him if there were no trade offers that I liked. That was my course with all the pending UFAs.”

On Michal Neuvirth, the goalie the Sabres got back from the Washington Capitals for Halak:

“I like the goalie that I got back, plain and simple. He’s a young goalie that I’ve seen for a long time, played in the OHL. For whatever reason he’s a backup there. He’s just not as important as he wants to be. I think when he gets to feel some love again or whatever you want to call it and gets an opportunity, that he can get his game back. In saying ‘get his game back,’ his stats are pretty good now.”

On not worrying about making deals:

“We make lots of mistakes, but if you get paralyzed because you may make a mistake, then you’re never going to make a deal. You do your homework, you scout.”