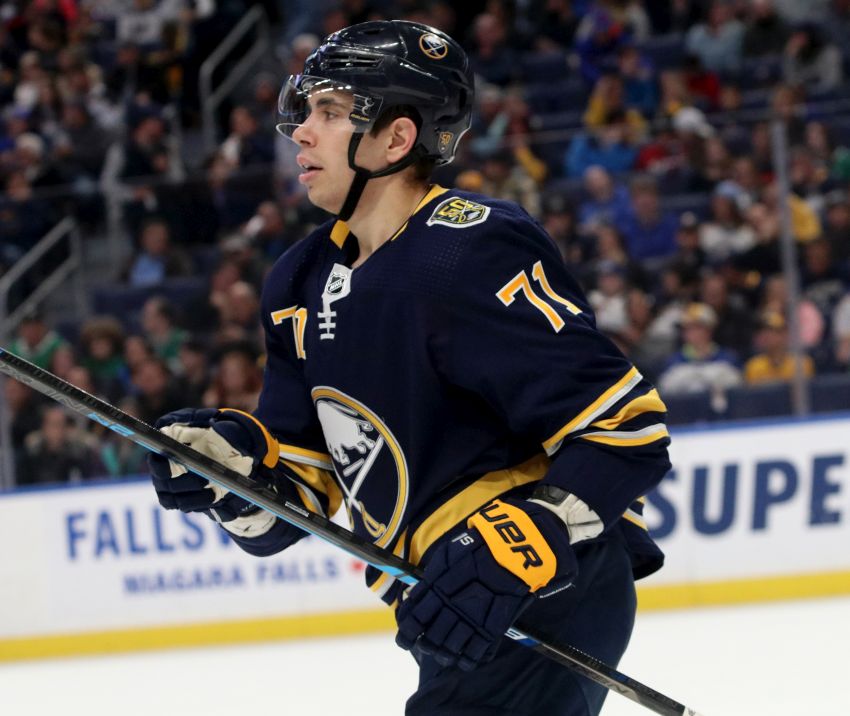 Evan Rodrigues is still looking for his first point this season. ©2019, Janet Schultz

BUFFALO – In their first 13 games, the Sabres have showcased one of the NHL’s slickest offenses, scoring 43 goals, an average of 3.3 a game.

At their current pace, they would score 271 times over 82 contests, their highest full-season total since 2006-07.

Only one Sabre who has played more than two games is still pointless: winger Evan Rodrigues.

Instead of building off a season that earned him a $2 million award in arbitration, Rodrigues, 25, has endured a tough month, sitting out six games as a healthy scratch.

Right now, Rodrigues has a spot in the lineup because of winger Jimmy Vesey’s upper-body injury.

“The game’s coming a little more easier to me right now, I’m feeling a little more confident, starting to make plays, just kind of get back to basics and believing in myself,” Rodrigues said following Wednesday’s practice inside KeyBank Center.

“He looked a lot more comfortable now in understanding what we are expecting in the role that he has in the line that he has,” Krueger said. “It’s one of those things, when you’re not in the lineup for a few weeks, the way you practice and the way you prepare is important.

“You can see he worked hard this break and has come out of it strongly.”

The slow start, of course, has shaken Rodrigues’ confidence a bit. In the preseason, he talked about his “belief that I’m a very valuable NHL player.”

Less than two weeks later, he began his fifth pro season in the press box.

“Whenever you don’t play, you have thoughts in your head, almost spin a little bit,” Rodrigues said. “You just got to kind of remember you’re here for a reason, just believe in yourself and just keep things simple and let the game kind of come back to you.”

Rodrigues, the only Sabres forward who hasn’t scored a goal, also struggled early last season, getting benched. He scored his first goal Nov. 21 in his 16th game. He scored just two goals in his first 39 appearances.

Still, he found a groove, scoring five goals over a seven-game stretch in late January and early February. He ended up finishing with nine goals and 29 points, career highs.

“I started on the fourth line, ended up being a healthy scratch (and) clawed my way back into it,” said Rodrigues, who broke his hand in training camp two years ago. “It just seems like I kind of grind my way back in. I’ve done it before and I’ll try to do it again. That’s all I can believe in.”

Rodrigues displayed his versatility in 2018-19, playing 11 of the 12 forward positions. But he has mostly stayed at right wing beside center Casey Mittelstadt and Vesey or Conor Sheary in his six outings.

In Friday’s 2-0 win over the Detroit Red Wings, the trio enjoyed a strong night, generating a healthy Corsi For – the percentage of shot attempts by the team while the line is on the ice five-on-five – of 72.7%, according to NaturalStatTrick.com.

Rodrigues, who pumped five shots on goal, had a Corsi For of 71.4%.

In Monday’s 3-2 shootout loss to the Arizona Coyotes, the line’s Corsi For plummeted to 21.4%. Rodrigues, who mustered zero shots, dropped to 18.8%.

But the trio drew two penalties, including a trip by Lawson Crouse on Rodrigues that led to the Sabres’ first goal.

“It just seemed like we didn’t get pucks to the net,” Rodrigues said. “I don’t think we necessarily played bad or didn’t create, I just think when the opportunities came, we weren’t able to get them through or make one last play.

“Shots-wise, obviously it wasn’t good. But I think we had possession, we had plays that were one pass off.”

“Everybody forgets that great shift that set up the power play,” he said.