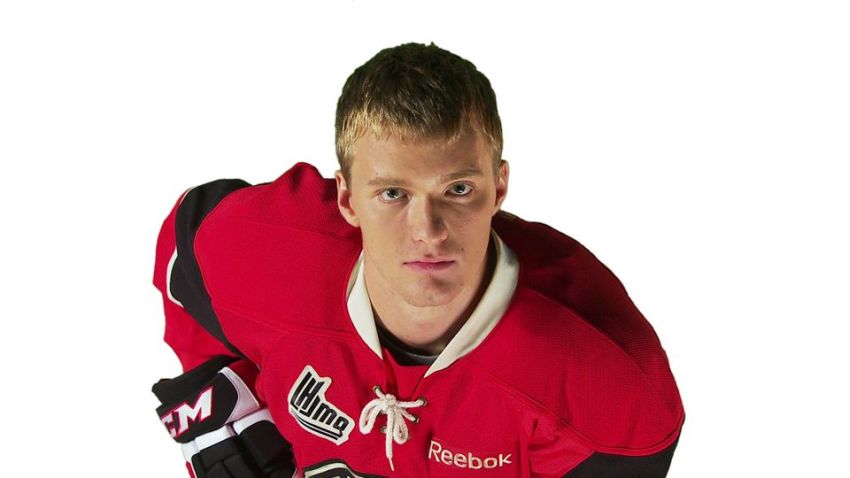 The Sabres were thrilled slick Russian Mikhail Grigorenko fell to them at No. 12. ©2012, Quebec Remparts

For the Buffalo Sabres, a team targeting a talented center, the planets aligned Friday night inside the Consol Energy Center.

Some had the 18-year-old Grigorenko pegged as the potential No. 1 overall selection at points during the 2011-12 season.

Minutes later, the Sabres dealt the 21st pick they had acquired from Nashville for Paul Gaustad and the 42nd selection to Calgary for the 14th pick, which they used to nab bullish Latvian center Zemgus Girgensons from the United States Hockey League’s Dubuque Fighting Saints.

For the Sabres, who need more young forward prospects, especially pivots, Friday could be a franchise-altering day.

“If you somebody told us we’d get those two guys at the end of the day, I’d be pretty happy,” said Kevin Devine, the team’s director of amateur scouting.

Grigorenko, who’s been dogged by a questionable work ethic and a belief he could bolt home to the KHL, thinks he’ll be playing for the Sabres in October.

“I will be ready to play in the NHL next year,” said Grigorenko, who hails from Khabarovsk, the same hometown as Sabres legend Alexander Mogilny.

“I’m not sure if he’s strong enough quite yet,” he said about the 6-foot-2, 191-pound Grigorenko. “But he’s got the skill level to play in the NHL right now. He’s got a big lower body. His upper body has to be developed a little bit.”

Grigorenko, who scored 40 goals and 85 points in 59 games last year, added later: “I can say now Buffalo Sabres is my team, and I can’t wait to go on the ice. I’m proud to wear this jersey and be part of this.”

Falling so far has left a little chip on his shoulder.

“I don’t really care about 29 teams in the league,” said Grigorenko, who battled mono and an ankle injury last season. “It’s just about one team, the Buffalo Sabres, and ending up proving them right, they made the right choice.”

“It all came back very positive,” Regier said. “Patrick is a huge believer. We had a number of meetings with (Grigorenko) and spoke with his representative.”

The Sabres, like many other teams, have shied away from Russians recently. They hadn’t selected one since 2005 and last took one in the first round when they took Artem Kryukov, an all-time bust, in 2000.

But Devine said Monday if a talented Russian fell, they could be swayed into taking him. The Sabres showed a strong interest in Grigorenko, talking to him several times recently.

The Sabres believe Grigorenko’s fully committed to the NHL. He came to North America last year with his mother and quickly learned English in a French-speaking city, taking three-hour lessons daily.

“Right now, at this point, I’m going to Vermont,” he said. “I got to see in the next couple days after rookie camp what’s going on.”

Devine added: “Fans of Buffalo will love this guy. He won’t quit.”

In other news, Regier acknowledged he spoke with the Penguins about star Jordan Staal, who was later dealt to the Carolina Hurricanes. It appears, at this point, the Sabres will keep center Derek Roy, who struggled mightily last season and has been the subject of trade speculation.

“My thinking with Derek remains what it is,” Regier said. “He’s under contract. He’s a good player. He’s going into the last year of his deal. I think there’s a lot of motivation there. I’ve met with him on a couple of occasions since the season’s end. He’s been very positive. He’s been in working out. So we’re heading in a good direction.”