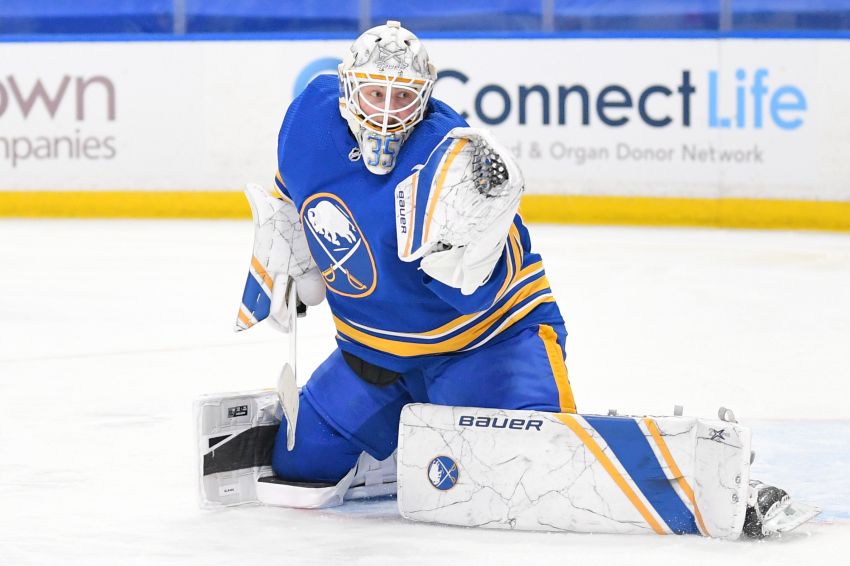 With the losses and injuries mounting, few expected the Buffalo Sabres, a team known for wilting under adversity, would close what had been a disappointing road trip by putting together one of their best efforts this trying season.

But the Sabres, fresh off a setback coach Ralph Krueger called the most painful of their 10 this year, responded with a complete team effort Tuesday, beating the New Jersey Devils 4-1 at Prudential Center.

Victor Olofsson scored a second-period power-play goal before even-strength goals from Rasmus Asplund and Dylan Cozens less than two minutes apart early in the third sealed the game. Goalie Linus Ullmark, who also played in Monday’s 3-2 loss to the New York Islanders, made 41 saves and lost his shutout with 32 seconds left.

The Sabres, who are down three of their top defensemen, finished their four-game road trip 2-2.

“We did need a little time to get our legs under us, especially starting late in the first and into the second, you could feel a surge and just a battle and compete level that was impressive when you look at how disappointing the trip had been until now, the quick turnover from yesterday and that very painful loss,” Sabres coach Ralph Krueger said on a Zoom call. “You know what? We’re pleased with just a really solid team effort – like, specialty teams, five-on-five – everybody really participating within the framework that we’re trying to do.

“And if you look at our D corps and it’s inexperience and how they battled and solved a lot of the pressure today, and finally, of course, Linus, possibly from my recollection, playing his first back-to-back in the time that I’ve been here, and he was outstanding.”

“That was probably the biggest thing was we had the shot clock somewhere down around six in the first two periods yesterday until the very end of the second,” Krueger said. “Just had a gut feel that he was in a good space and this was a really important game for us today.”

Krueger said the game against the Sabres’ new East Division rival felt like a postseason contest. A loss would’ve dropped them four points behind New Jersey.

“Instead of that, you’re tied with them in the standings, now you can try and reach upwards versus just hanging on,” he said. “It was a playoff feel coming into this game today. The meetings today, this morning, this afternoon, everybody was really edgy and focused.

“We’re just happy the team responded to that kind of pressure we put on them today and Linus led the way. He looked like a real leader toady and a top-rate NHL goalie in a game that really mattered to us.”

As Ullmark stymied the Devils, the Sabres hit about four posts before finally scoring a goal.

“We were just kind of laughing, honestly,” Olofsson said of hitting the iron twice on an early power play. “Two posts and we had some more really good chances so we knew it was going to come if we kept moving the puck like that, and eventually it did.”

Asplund said: “We feel that we’re playing the right way and we know that if we keep playing that way, we’re going to get rewarded with points.”