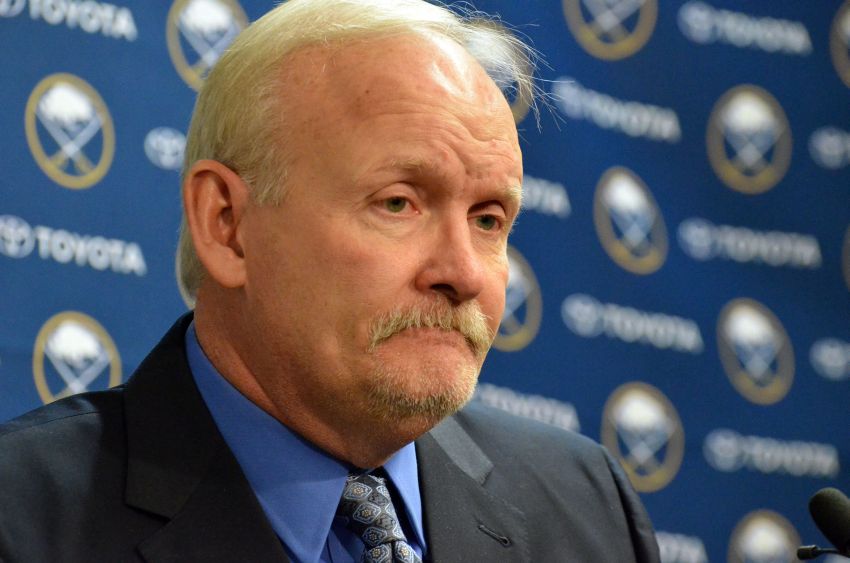 BUFFALO – This afternoon, Sabres general manager Darcy Regier drove to Lindy Ruff’s home in Clarence and relieved the NHL’s longest-tenured coach of his duties, ending a close relationship that dates back to 1997.

Shortly after, Ruff drove to the Northtown Center, boarded the team bus before it left for Toronto and addressed his former players one final time.

Rochester Americans coach Ron Rolston is the new interim coach for the rest of the season. He’s driving up to Toronto with Regier tonight and will address his new players later. Rolston will be behind the bench Thursday and could get the full-time gig after the season.

Today will go down as one of the most surreal days in Sabres history. At times, it seemed as if Ruff would coach for life. He ran a 90-minute practice today inside the First Niagara Center and addressed the media afterward.

But as that was all going on, Regier was meeting with the team’s other higher-ups and deciding Ruff’s fate. Tuesday’s awful 2-1 loss to Winnipeg, a game in which the Sabres were booed throughout, proved to be the breaking point.

The Sabres are 6-10-1 and last in the Northeast Division and 13th in the Eastern Conference.

Here’s more on the decision from Regier, who looked shaken and broke down a couple times as he spoke about Ruff’s long tenure and the difficult decision. Regier said it was his decision, although he had input from owner Terry Pegula and others.

On why the decision was made:

“It was made for the goal of making the playoffs. Unfortunately, (we had) a lack of progress. I think we were making some strides. But in the end, for every two steps forward it was one step back and sometimes not that. Unfortunately, this is the time of year when the coaching is probably the thing that’s evaluated the most.”

Regier said the conversation about firing Ruff got serious as of late but the decision was made today. He wasn’t prepared to put him behind the bench against the Maple Leafs.

“The prevailing factor here was where we are, where we’re going, conversation that I had with Lindy,” Regier said. “How he felt about how the team was. I think last game was quite honestly a tipping point. It was evident to me we are searching for answers to too many questions. That had a lot to do with it as well.”

On the difficult conversation with Ruff:

On Ruff not losing the team:

“He didn’t lose the team in any way in respect to communication. In fact, communication has never been better. So there were huge strides done in that regard. Unfortunately, it didn’t translate to the ice. For whatever reason, we couldn’t get any traction, especially defensively. He felt at times it was … really hard to get a finger on.”

On how Ruff should be remembered:

“His teams play with structure, discipline, they have a work ethic. He has a good hockey club down there right now.”

“He will coach his way, and it is different. Is it drastically different? Probably not. But there are some differences.”