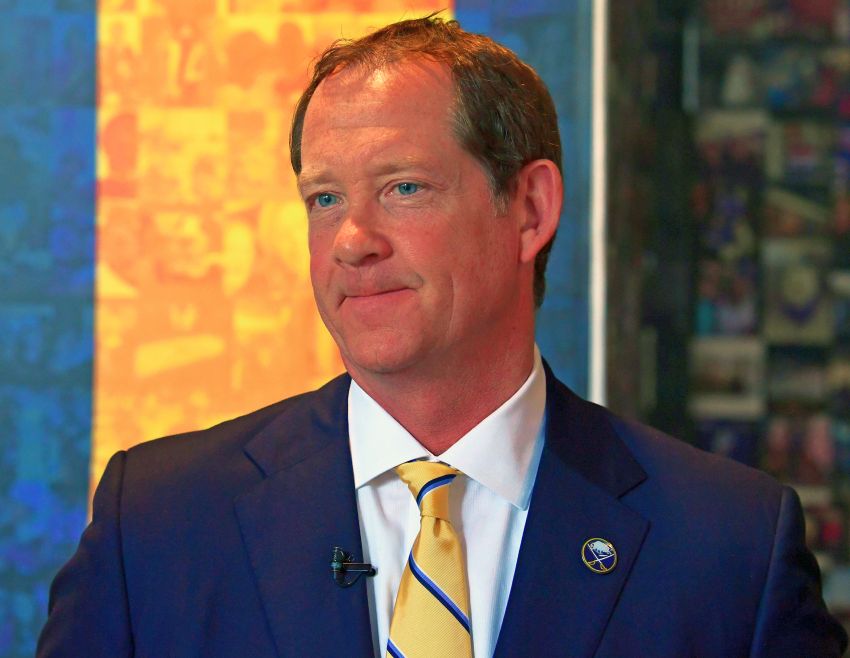 Buffalo and the Sabres are close to Phil Housley’s heart. ©2019, Hickling Images

The Hall of Fame defenseman desperately wanted to lead the Sabres back to glory.

“It’s funny, because you sort of think of what you could’ve done differently,” Housley said Sunday inside KeyBank Center, where the Arizona Coyotes prepared for tonight’s game against the Sabres, his first visit back. “You don’t know if you’re going to be back in the game, and I didn’t really know if I wanted to get back, because of what happened.”

These days, Housley, 55, seems happy in his gig as an assistant coach, a role he previously enjoyed for four seasons with the Nashville Predators.

Housley warmly greeted some familiar faces when he spotted them outside Arizona’s dressing room Sunday. He smiled and was upbeat during his six-minute chat.

“This place will always have a big piece of my heart, because I started my career here, I started my head coaching career here, so I’ve always loved the people of Buffalo,” he said. “They’ve been very good to me. That’s not going to change.”

Still, Housley wouldn’t revisit the past much. When asked about what he could’ve done differently or any disconnect with his players, he politely declined to answer.

The Sabres have changed dramatically under new coach Ralph Krueger, morphing into the NHL’s biggest early-season surprise at 9-2-1.

As their terrific record indicates, the Sabres have improved in all facets of the game.

Players have lauded Krueger’s communication skills and how his new system allows them utilize their instincts. They’re no longer overwhelmed with Xs and Os.

Housley, of course, enjoyed some fleeting success here, most notably a 10-game winning streak last November. But the Sabres quickly fell apart, and the same team that had ranked first overall fell out of the playoff race.

Housley likely would’ve kept his job if the Sabres hadn’t imploded down the stretch, losing 15 out of 16 games in March and early April.

“In hindsight, there’s a lot of things you probably could’ve changed, but that’s the part of being a first-time head coach, and you learn from that,” he said.

After leaving Buffalo, Housley said he had “mixed emotions” running through his head.

Then Housley said three teams called him around the NHL Draft in late June.

The Coyotes, a team coached by Tocchet, his former teammate with the Washington Capitals, hired Housley on June 26.

Tocchet said he spoke to Housley, people in Nashville’s organization and Sabres general manager Jason Botterill, his friend from their days together with the Pittsburgh Penguins.

“He was very impactful in me hiring him,” Tocchet said of Botterill.

“He’s a really prepared guy,” he said. “I knew he was prepared; I didn’t know he was this prepared.”

“Our heartbeat of our team is our defense,” said Tocchet, whose Coyotes have started 6-3-1. “I felt that Phil could really bring it to another level.”

The Coyotes’ defense, led by Oliver Ekman-Larsson, is a “veteran core trying to add more offense to our attack,” Housley said.

Tocchet said Housley has brought more focus to the power play. He attributes its improvement – the Coyotes rank 15th after finishing 26th last season – to Housley’s attention to details.

“That’s huge, just to be able to relate with the guy and just have normal conversations sometimes,” Chychrun said. “It doesn’t always have to be hockey. It’s nice to come to the rink and have a refreshing conversation, something different.”

One thought on “Phil Housley happy for Sabres’ success, doesn’t want to dwell on past”