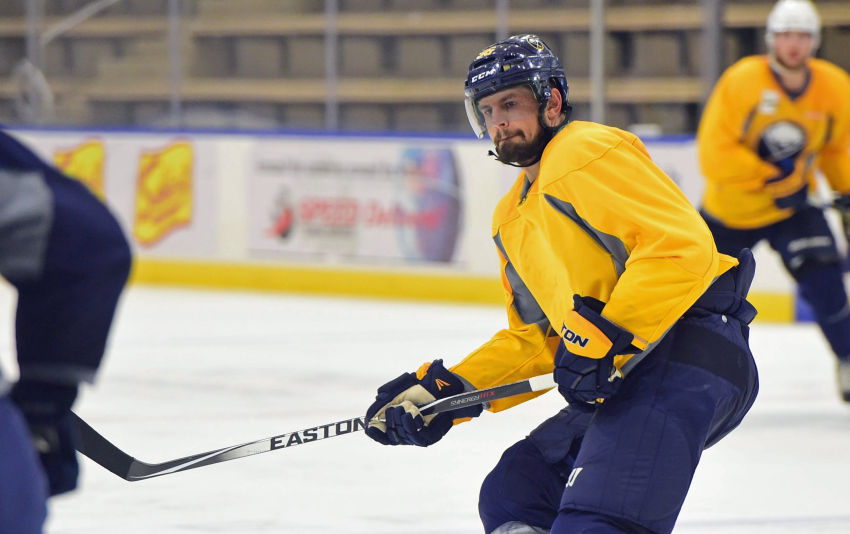 BUFFALO – Among all the blue and gold on the ice during an informal late-summer workout of local players earlier this week, one color stood out, the black Patrick Kaleta was wearing.

Instead of proudly sporting a Sabres jersey, the passionate Kaleta, a free agent, skated in an NHLPA sweater the union gave its players during the lockout three years ago.

Two weeks before NHL training camps open, Kaleta, 29, doesn’t have a job for the upcoming season. Just about anything, the Angola native said, is on the table, including staying with the Sabres for his 10th season, something he wants badly.

It’s hard for the agitating winger to envision himself playing for another team.

“I want to be a Sabre, 100 percent,” Kaleta told the Times Herald. “I’d do anything for my teammates and these guys. But then again, if they don’t want me, I have to do what’s best for my family.”

Kaleta said teams are talking to his agent. He’s willing to attend a camp on a tryout. In the meantime, he has been filling his days “pretty tightly” doing all sorts of on- and off-ice work. He said getting married earlier in the summer has helped him have fun.

“When you have a Plan A and you don’t have a Plan B, you’re committed to Plan A,” he said. “So that’s been my focus and my job all summer.”

Kaleta believes working with a sports psychologist has helped him embrace a positive approach. In the beginning of the summer, his uncertain status bothered him.

“But then all that work with the sports psychologist is paying off,” he said. “It’s staying positive and staying on the task at hand. Whatever does come our way, I think the team is going to be pleasantly surprised knowing how healthy I am and to what I can actually bring to the team.”

Still, being without a contract “sucks,” he said. Kaleta, of course, isn’t alone. Dozens of established veterans are still jobless, victims of the salary cap and a trend toward younger players.

Kaleta’s reputation as oft-injured and reckless might be scaring teams away. He played only 81 of a possible 212 games under his three-year contract that recently expired. A torn ACL early in 2013-14 ended his season. Broken bones in his face and a bone chip limited him to 42 contests last season.

“I probably feel as good as I have in the last five years,” Kaleta said. “You can heal after an injury like that, playing last season. But I truly feel like I’m back where I need to be. My speed has come back. My skating feels a … thousand times better than what it did. That’s good news for me.”

He’s also high on the NHL’s radar, having been suspended four times, including a 10-game ban for hitting Columbus’ Jack Johnson in the head in October 2013. Following that illegal hit, the Sabres’ old regime jettisoned Kaleta to the AHL to repair his game. He hasn’t had an incident since, and he insists he plays a cleaner and more restrained style while still showcasing aggressiveness.

“I’m pumped up and ready to go,” Kaleta said. “Whatever comes my way, I’ll be welcoming it with open arms.”

One thought on “Patrick Kaleta staying positive, wants to return to Sabres”