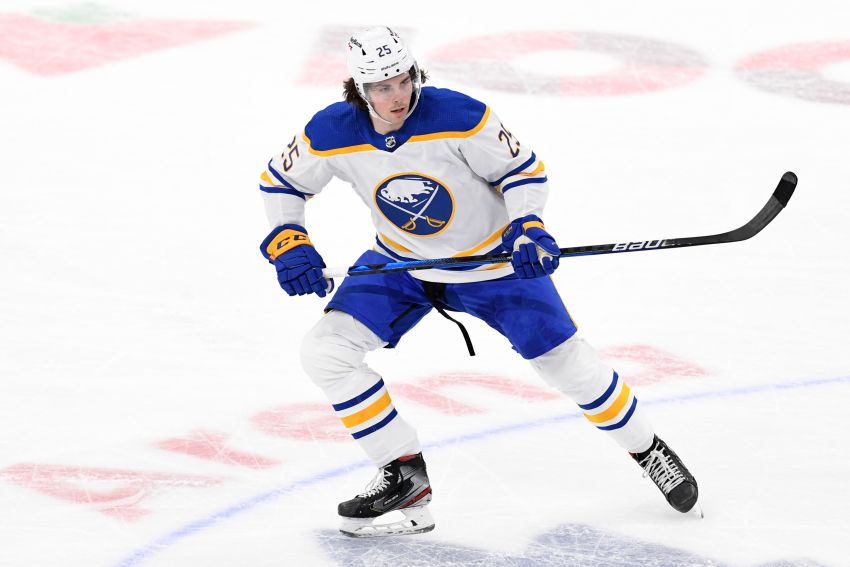 TORONTO – Almost six minutes into his debut, Sabres rookie Owen Power faced his first stiff test as an NHL defenseman, a two-on-one with the Maple Leafs’ Mark Giordano and Auston Matthews roaring toward him.

Giordano, the puck carrier, won the Norris Trophy three years ago. Matthews is hockey’s most dynamic scorer, having potted a whopping 58 goals this season.

Power, the first overall pick in 2021, did not flinch.

During one of his first shifts in Tuesday’s 5-2 win, Power demonstrated poise beyond his 19 years, calmly breaking up Giordano’s pass in the slot.

“Right away, there’s no panic in his game,” winger Alex Tuch said after the Sabres won their third straight game over the Leafs. “I feel like he’s been in the league for 10 years already in his first game.”

He added: “He’s got a really bright future ahead of him. He’ll be a superstar in this league.”

Sabres coach Don Granato utilized Power like a veteran, throwing him headfirst into the fray. Remember, Power was playing college hockey at Michigan less than a week ago. He has had just one full practice with Buffalo.

“He was great,” Granato said of Power. “That’s a tremendous job. As I’ve mentioned beforehand, there’s no doubt he’s rehearsed in his mind being in this building and this league many times, and it looked like it.”

Granato used the neophyte against Matthews’ line for the opening faceoff. The two-on-one he broke up was during a four-on-four.

How many coaches would put a defenseman playing his first game out against Matthews in that situation?

“It was pretty cool,” Power said of playing against Matthews. “Someone I’ve watched since he’s been in the league and been one of my favorite players to watch as a fan. He’s definitely impressive. Just a lot of fun to be out there with him.”

Granato said feels “no anxiety” putting Power on the ice against elite players because he has watched him so much and already grown comfortable with his talents.

“He is a No. 1 pick overall, an elite player, so honestly, he has such a calm to him, such a presence to him, you see his ability to almost slow the game around him,” Granato said. “I’ve watched that in him, that presence in him for such a long time, I just knew he would get a feel for the pace right away. …

“He has such a good feel for the game, the time and space, that’s why he has a calm. The game is less of a stress to him than to others that see the game and situations as random. He’ll hop over the boards and see patterns, pick up patterns as all the top players do in any sport. He looked comfortable as a result.”

The 6-foot-6, 213-pound Power skated 19 minutes, 50 seconds against the Leafs, mostly beside Henri Jokiharju. When Power broke up the two-on-one, he was playing with Rasmus Dahlin.

The entire night, of course, will forever be seared in Power’s memory. He grew up in nearby Mississauga, Ontario, and had a large cheering contingent around the tunnel when he came out for his first game solo lap for the pregame warm-up.

Then Power settled during his first shift and never looked out of place.

“Once you got the first one out of the way, you kind of get into the rhythm,” Power said. “I think it kind of calmed my nerves down, and a nice showing like that is pretty easy.”

The Sabres, who ended a three-game losing streak, have made beating the Leafs pretty easy. They’ve defeated the Leafs three times since March 2, outscoring them 15-5.

The Leafs had won seven of their last eight games (7-0-1) entering Tuesday’s contest.

Sabres winger Kyle Okposo’s power-play goal 7:36 into the game opened the scoring before the crowd of 18,393 fans. After Timothy Liljegren tied it early in the second period, center Tage Thompson’s power-play goal, his team-leading 33rd, put the Sabres back up. Then third-period goals by winger Jeff Skinner, his 31st, and Dahlin helped the Sabres pull away.

The Sabres held Matthews, who had 21 goals in his last 13 games entering Tuesday’s contest, pointless for the first time since March 13, when they beat the Leafs 5-2 at the Heritage Classic.