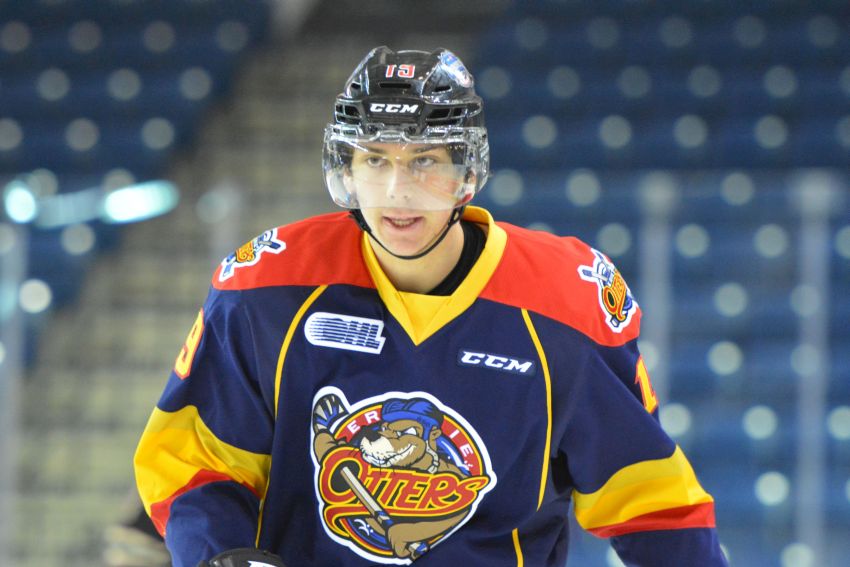 The 18-year-old compiled 45 goals and 129 points in his second junior season, improving his production 35 goals and a stunning 90 points.

Strome, it should be noted, is the Otters’ No. 2 center. That’s right, he’s not even a first-liner.

The Otters’ top center, of course, is McDavid, the once-in-a-generation talent who has a slew of NHL teams, including the Buffalo Sabres, fielding less-than stellar lineups these days to increase their low odds of drafting him.

“It’s weird,” Otters coach Kris Knoblauch said by phone Monday, “you have a player who won the scoring title on a pretty good team and not get a lot of attention. Just playing second fiddle to Connor, it didn’t bother Dylan at all. He understands that Connor’s an exceptional talent. … Dylan just kind of didn’t have that pressure, wasn’t always in the limelight.”

But Strome’s success isn’t a byproduct of McDavid’s brilliance. The friends only play together on the power play. McDavid missed 21 of the 68 games, so Strome faced the opponent’s best checkers often.

In games without McDavid, Strome scored 18 goals and 35 points, according to Sportsnet, a healthy .86 goals and 1.67 points a game. Strome enjoyed a career day Sunday with McDavid scratched because of an illness.

“It’s definitely pretty cool,” Strome said about producing without McDavid. “Obviously, he’s an unbelievable player and the best player in the world at our age. … There’s people who are always going to say that I just get points because of him.”

“We have similar games,” Strome said. “We kind of both slow the game down.”

Strome, whose older brother Ryan was drafted fifth by the New York Islanders in 2011, can slow the game down with his remarkable composure and passing skills.

“I think his best asset is finding his teammates,” Knoblauch said. “He’s very composed with the puck. He can hold onto it that extra second or split-second, so when his teammate gets open, he can get the puck to him.”

Strome added: “I think what I do the best is when I have the puck on my stick, I like to find my teammates when they’re open.”

Talk has centered all season on Eichel, a superstar center at Boston University, being the ultimate consolation prize for a team. But the clubs picking third and fourth – remember, the 30th-place Sabres aren’t guaranteed the first or second pick yet – will receive an elite, potentially franchise-changing talent.

Strome and Boston College defenseman Noah Hanifin are widely regarded as the next best prospects.

The hapless Toronto Maple Leafs, Strome’s hometown team, could have one of those picks.

“I try not to think about it as much as people would think,” Strome said about the draft. “Obviously, it’s there and it’s on my mind. There’s people on Twitter that are pretty crazy. ‘Leafs Nation’ is pretty hectic and they’ve been saying a lot of things. But I’m not really sure what’s going to happen.”

Incredibly, barely a year ago, Strome was the Otters’ ninth or 10th forward. Strome’s transformation started last postseason, when he morphed into one of Knoblauch’s top players.

“You could see him making that step,” Knoblauch said. “It wasn’t over the summer where most of the guys come back and just are different people and players. But you could see it last year at the end of the season, him becoming more of a dominant player.”

“It is very impressive,” Knoblauch said about Strome’s production.

So is the Otters’ torrid run. They have 10 straight wins entering their first-round playoff series with the Sarnia Sting. Anything short of a championship would be disappointing.

No one else, however, possesses the Otters’ firepower.