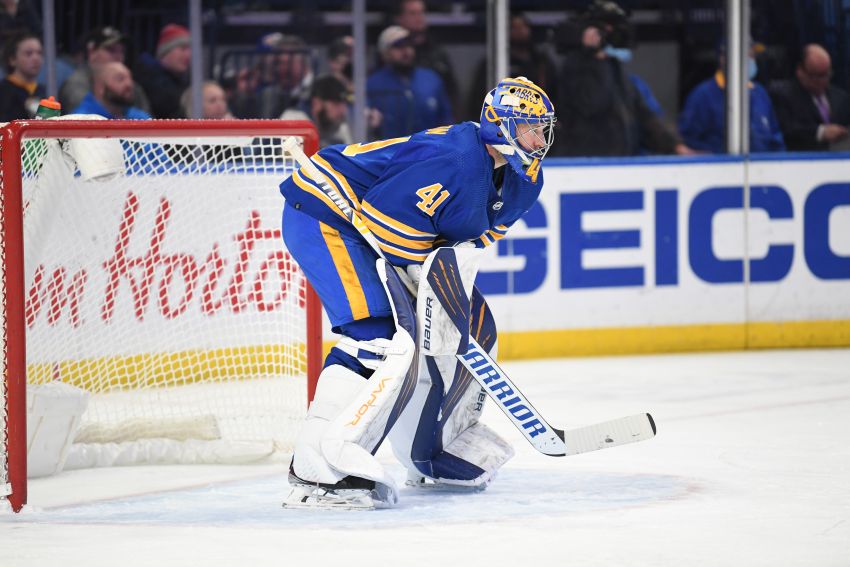 BUFFALO – It was the late 1980s, and Craig Anderson was sitting at the end of the bench in a chilly rink in Chicago on the verge of tears.

Anderson had finally had enough of playing defense. His team was getting blown out, and he told his coach he did not want to play unless he was the goalie.

The youngster, then 7 or 8, had been rotating between defense and the net. But on that day, he decided he wanted to just be a goalie. He just wasn’t good on the blue line.

Anderson’s coach granted his wish, so his father, Richard, hurried out to the car after the first period to grab his goaltending equipment.

“That was pretty much the end of it,” Anderson said of playing defense.

More than 30 years later, Anderson, 40, still hasn’t left the net. Today, the Sabres veteran, the NHL’s oldest goalie, is on the brink of another milestone.

His next victory will make him just the sixth American-born goalie to crack the prestigious 300-win mark. The triumph will also tie him with Tomas Vokoun for 38th on the all-time list.

That win could come today or Monday at KeyBank Center. If Anderson doesn’t start this afternoon’s game against the Los Angeles Kings, he will likely face the Florida Panthers, one of six teams Anderson has played for since entering the league in 2002-03.

Earning his 300th victory – “Just one of those nice even numbers,” he said – has been on Anderson’s radar for two years. When the COVID-19 pandemic hit in March 2020 and everything shut down, Anderson said he “felt kind of cheated a little bit.”

The Ottawa Senators’ season was over, and he stood 11 wins short of 300.

“Just felt like I had more to give and that was kind of a personal goal to set because if you don’t have goals, you have nothing to achieve or nothing to strive for, you can lose some motivation,” Anderson said following Saturday’s practice at LECOM Harborcenter. “I think finding ways to stay motivated and that’s an easy one, to come into the rink and drive and keep trying to improve and compete.”

Remarkably, Anderson, who signed a one-year contract with the Sabres, hasn’t slowed much or at all in his 19th season. Based on his recent exploits– he has been Buffalo’s backbone – he can likely continue his career next season if he chooses to. He might also be coveted by a contender before the March 21 trade deadline.

Even in a secondary role, he can provide valuable wisdom like he has throughout this season.

“Last night, he comes right to the bench, is trying to calm guys down, trying to give guys direction,” Sabres coach Don Granato said of Friday’s 5-4 win over the Minnesota Wild. “As a coach … there’s some times that makes you cringe because the maybe the message isn’t the right message.

“I can tell you with Craig, like with (veteran Kyle Okposo), the message is sound. I mean, it’s a message of great hindsight and experience and very in the moment.”

As Anderson struggled to earn just one victory and stick in the NHL nearly two decades ago, the idea of him someday becoming one of the most decorated goalies in history would’ve seemed ludicrous.

He began his career with an awful 0-11-4 record for the Chicago Blackhawks – he has played so long he recorded two ties in 2002-03 – that is seared in his mind.

Finally, after beginning his second season with eight straight losses, he beat the Columbus Blue Jackets 7-0 on Jan. 22, 2004, the first of 28 shutouts he has registered.

That was the third of five seasons in which Anderson played all or part of the year in the minors. Before he established himself as a starter with the Colorado Avalanche in 2009-10, he pinballed around the league.

“That’s one of those things where when you look back you kind of laugh at it but when you were in it, I don’t think I was kind of old enough or mature enough to actually look at and realize how much of a deficit we started with back in the day,” said Anderson, who played 146 AHL games.

After the Flames drafted Anderson in 1999, he attended training camp with one of his idols, Hall of Fame goalie Grant Fuhr, but never signed with Calgary. The Blackhawks chose him when he re-entered the draft in 2001, and he spent most of the next five years in their organization.

He once left Chicago for two weeks early in 2006 when the Boston Bruins and St. Louis Blues both claimed him off waivers. When the Blackhawks took him back, it marked the third time in a 16-day span a team had claimed him.

Granato was an assistant with the Blues when Anderson spent three days in St. Louis.

“He didn’t play and we had to put him back on waivers a few days later,” Granato said. “I can’t even remember the scenario. … Here he is approaching 300 wins now (16) years later. So remarkable.”

Granato said Anderson battled and “made himself an NHL career.”

“I have a lot of respect for him as a person,” he said. “But when you think about the grind that he’s gone through, that respect rises even more. I told even our team a few games ago that as a coach, I’ll be very proud to be a part of his 300 wins. I mean, it’s pretty special that he’s got a chance to do that and we have a chance to be a part of it.”