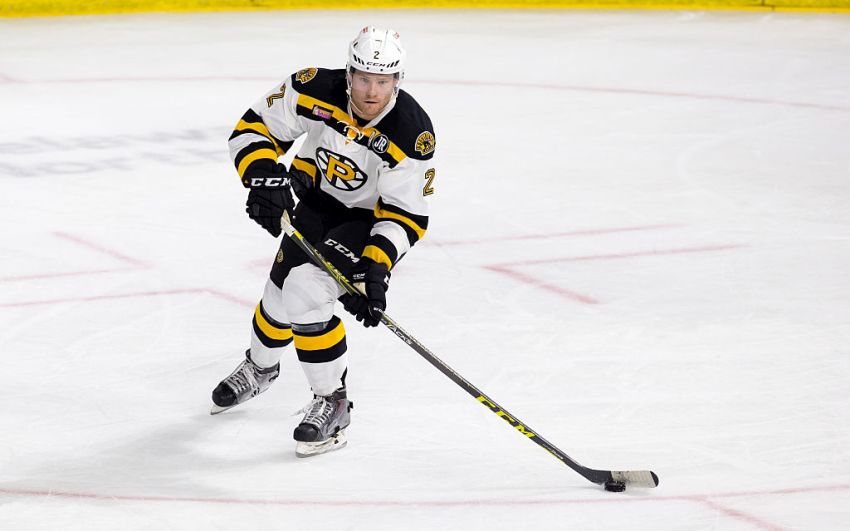 It was the summer of 2015, and after spending three seasons with the San Jose Sharks, defenseman Matt Irwin felt a strong desire to return to the East Coast.

Having attended UMass for two years and developed three seasons with San Jose’s AHL affiliate, the Worcester Sharks, Irwin felt comfortable in Massachusetts. When an opportunity materialized to the join the Boston Bruins as a free agent, he pounced on it, signing a one-year contract.

Irwin loved the idea of playing for an Original Six franchise. The Bruins’ rich history and rabid fan base excited him.

“Everything that went into it, at that point in my career, was kind of pointing me toward heading to the Bruins,” said Irwin, who signed a one-year deal with the Buffalo Sabres on Oct. 9.

Irwin’s very brief Bruins career started promisingly. He never expected he would be in the minors by mid-October, playing beside an affable rookie named Colby Cave and other prospects 51 miles away with their AHL affiliate, Providence Bruins.

An impressive preseason earned Irwin a spot in Boston’s opening night lineup. Then he registered an ugly minus-3 rating in his first outing. Two days later, he compiled a minus-2. The next day, the 0-2 Bruins waived him.

“I was stunned,” Irwin told the Times Herald by phone Tuesday from his offseason home in Victoria, British Columbia.

Irwin had spent the last three seasons in the NHL. He knew he had played poorly. Still, he thought perhaps a brief benching and an opportunity to study some video would be helpful. Throughout his career, he believes he has displayed a knack for bouncing back.

But after Irwin cleared waivers, Boston jettisoned him to Providence, never to return.

Irwin didn’t suddenly rediscover his game in the minors. Despite having 155 games of NHL experience – he hadn’t played in the AHL since 2012-13 – he was scratched in the regular season and playoffs. He was clearly out of Boston’s plans.

He wondered where his career was going and if his NHL dream was over.

“I’m grateful for every opportunity to play professional hockey, but it was mentally draining in the sense that I wasn’t seeing any light at the end of the tunnel to potentially get a call back up to the NHL,” Irwin said.

Irwin would rebound by the next season. Other than a four-game stint in the AHL early in 2016-17, he has spent the last four years in the big leagues. He played 22 playoff games during the Nashville Predators’ run to the Stanley Cup final in 2017.

At 32, an age many defensemen are graying or out of the league, Irwin signed with the Sabres hours after free agency opened.

That 2015-16 season turned out to be a blip in an otherwise strong career. Irwin battled through what he called a “trying” year with help from Cave, who passed away at 25 from a brain bleed April 11, and a special group of players in Providence.

“Talk about one of the best guys you could ever meet or a teammate who would go through a wall for any one of his teammates or coaches or staff – anything,” Irwin said of Cave on a Zoom call Oct. 21. “Just a really, really good human being. Miss him dearly, think about him all the time.”

During that chat with the media, Irwin was sporting a No. 12 “Caver” that Cave’s wife, Emily, sent him. He said he wears it almost every day. Irwin’s wife, Chantel, also grew close to Cave and his future wife.

“Everywhere he went, there was always guys following him, because he was the life of it,” Irwin said Tuesday.

The warm memories of Irwin’s brief time with Cave are seared in his mind. A simple hello from Cave in the morning – “With all the energy he had in the world,” Irwin said – would pick him up.

“I’d come to the rink every day with guys like Colb, made those days so much better,” he said. “We put in the work every day, we had fun together. Outside of the rink we had a blast. We were always going out for dinners and drinks and stuff like that as a group.

“That was something we did a lot of down there, and Colb was right there with us every time. He was the life of it, for sure. He was a lot of fun to be around. But he made that season for me very much manageable in the sense that coming to the rink was a lot more fun with him in the locker room.”

Right away, Cave’s work ethic grabbed Irwin’s attention. So did the Saskatchewan native’s dance moves before practices and games. The center was a neophyte in pro hockey, just 20, yet he helped set Providence’s tone.

“On the ice, man, that guy would give everything he got in practice and in games,” Irwin said. “He would do anything he could for his teammates, and it was contagious. And as a rookie, to have that presence about you, and that way it caught my eye and some other veterans on the team eyes, it was great for us.

“It was an opportunity for us to learn from him. That energy he brought to the rink, he had this contagious smile that would just light up a room.”

He added: “Just a fun guy to be around, and it brought everyone together. That was just kind of his demeanor, the way he went about his business and his life was very joyful and brought everyone that was around him closer.”

Irwin knew Cave would earn an opportunity in the NHL. He possessed the talent, versatility and tenacity to thrive. In 2017-18, Cave played his first three games.

“When the puck dropped, he meant business,” Irwin said. “He had a great year with us. He’d do anything from scoring goals to making plays, fighting, just playing physical, hard to play against, penalty kill. Just an all-around great player.”

The next season, Cave made 20 more appearances with the Bruins, including a game against Irwin’s Predators on Dec. 22, 2018.

When the friends reconnected at TD Garden following Boston’s 5-2 win, Irwin congratulated Cave and told him to stick to his guns and keep being a pest.

Three weeks later, the Edmonton Oilers claimed Cave on waivers. He stayed in the NHL for the final three months. He split last season between the NHL and the Oilers’ AHL affiliate, the Bakersfield Condors.

Hours before Cave fell ill, the Oilers informed him he would be summoned when the season resumed following the pause for the COVID-19 pandemic, Emily Cave told ESPN.com.

“The hockey world was a better place with Colby in it,” Irwin said. “I hope a lot of people that … had the opportunity to meet him or play with him or younger kids took some things from him and how he went about his everyday life and instill that in how they carry themselves, because there’s not too many better people you’ll find out there than Colby Cave and … the way he carried himself and treated people.”