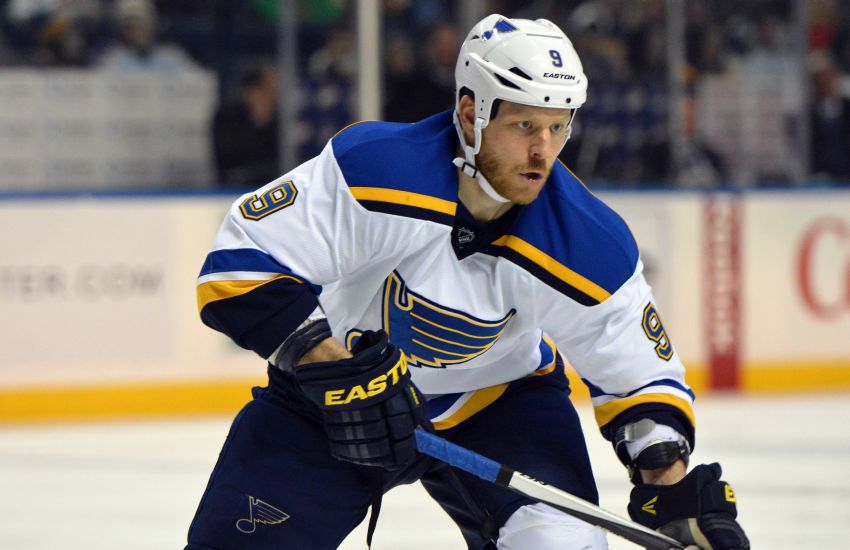 BUFFALO – They’re still all over town. Go to a Sabres game, walk around the mall or do some grocery shopping, and you’ll inevitably see someone wearing a No. 9 Steve Ott Sabres jersey.

“Must’ve been on sale when I got traded or something,” Ott joked Thursday prior to the St. Louis Blues’ 3-0 win, his first game in Buffalo since the Sabres dealt him Feb. 28. “I don’t know. Maybe they were just giving them away when I got moved or something.”

Kidding aside, the popular former Sabres captain is moved a city he spent less than two seasons playing in remembers him so well.

“It’s humbling when anybody wears your jersey,” Ott said inside the First Niagara Center.

Thursday was a special homecoming for Ott, whose gritty, blue-collar style identified with the team’s rabid fan base. The 32-year-old received a warm ovation when the Sabres honored him with a video montage during a first-period stoppage.

Ott owned the dressing room throughout his 107-game run here, holding court and laughing most days as he relaxed in his stall. He caught up with Sabres defenseman Mike Weber, someone he calls a brother, and center Marcus Foligno for dinner Wednesday night. Prior to the game, Ott joked he wanted to exact some revenge on Sabres agitator Patrick Kaleta for gloating after their 2010 fight when Ott played for Dallas.

“He doesn’t really know, but I still owe him one for raising the roof when we got in a fight here,” he said. “I’ll be playing him a little harder than the others. But Patty’s one of my good buddies. Like them all out there, I would be doing an unjust service if I wasn’t playing extremely hard against those guys.”

Ott has meshed well with the Blues this season, mostly playing a fourth-line role. The Blues entered Thursday as the NHL’s hottest team, having won six straight games and 11 of 12 (11-0-1).

“We’re really good,” Ott said. “The reason why we’re really good is because (of) the details in our games. … It feels like it’s 1-0-11 the way (coach Ken Hitchcock) keeps the details and pushing the pace on our team. That’s something we’re really not letting ourselves getting ahead of the big picture we see at the end.”

Ott saw the big picture in Buffalo. Before the deadline deal, he repeatedly said he was willing to stay and play a role in the Sabres’ rebuild. He still keeps close tabs on his old club.

“I’d be lying if I didn’t say I watched a lot of games,” he said. “I still have a lot of great friends over in that dressing room. Through the adversity that they’re facing at times, it’s tough to see because I still feel for a lot of those guys over there.”

Before Foligno broke his hand fighting Boston’s Matt Bartkowski on Dec. 21, the 23-year-old was enjoying perhaps the best run of his four-year career.

Foligno had just been moved to center by Sabres coach Ted Nolan. He had a three-game goal streak during the team’s torrid run earlier in December.

“That’s your captain,” Foligno said after skating Thursday morning. “That’s Brian Gionta. Anyone else in this dressing room gets hit like that, you want to step in for them. That’s the mentality I think we’re trying to grow here.”

Foligno has missed 18 games. Gionta sat out 13 games. Bartkowski was fined but not suspended.

“I thought for sure he would get suspended or something,” Foligno said. “But he was fined. I just thought that I was the one that made the pass. I didn’t think it was that bad of a suicide pass. That’s what you call it when something like that happens.”

The Sabres made one lineup move against the Blues, inserting defenseman Andre Benoit for 19-year-old Nikita Zadorov.

Zadorov was in the middle of a big melee in the Sabres’ 6-1 loss Nov. 11 in St. Louis. Is Nolan protecting him? The Blues possibly wanted some retribution.

Former Sabres defenseman Chris Butler found the open market tough in July. After playing all 82 games with Calgary last season, the St. Louis native eventually settled for a two-way contract with the Blues.

The 28-year-old started the season with the Blues’ affiliate in Chicago, his first AHL stint since 2008-09.

“It was fun to kind of play again and get away from the business side of the game a little bit,” Butler said.

The Blues recalled Butler, who played 155 games with the Sabres from 2008-11, in late November.