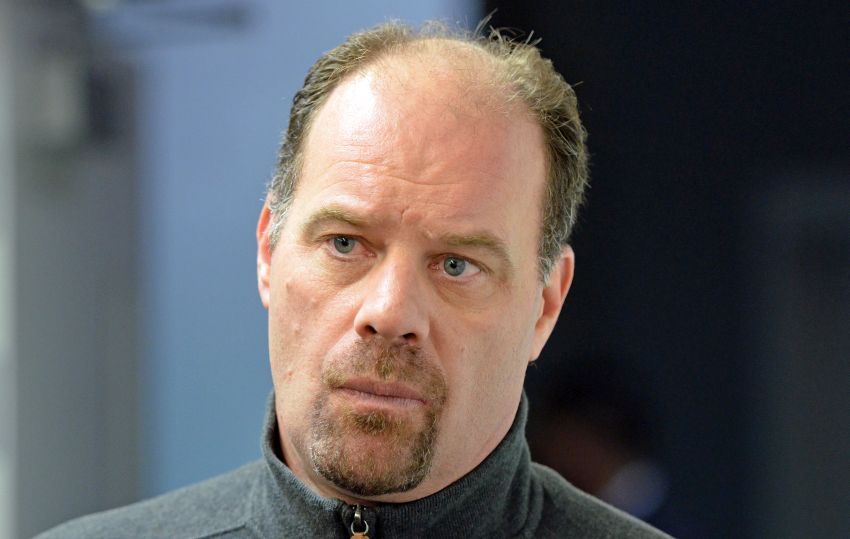 With play-by-play man Randy Moller and the Florida Panthers in town, I thought I’d flashback to one of my favorite stories of the last five years, Moller talking about his, shall we say unique, style of calling a goal. This story ran April 1, 2010. Give it a read. I’ve posted plenty of audio below.

BUFFALO – One minute, 51 seconds into the Sabres’ 6-2 win Wednesday, Florida Panthers winger Jeff Taffe grabbed a pass from Steve MacIntyre in the slot and roofed a shot by goalie Ryan Miller.

Up in the Ted Darling Memorial Press Box inside HSBC Arena, Randy Moller called the goal with a play-by-play man’s usual liveliness for 790 The Ticket, the Panthers’ flagship station.

Then Moller, a former Sabres defenseman, added his own unique twist to the game’s opening score.

“Now I have a machine gun!” Moller yelled to his listeners. “Ho ho ho!”

What? Why would Moller quote a line from the movie “Die Hard” following a hockey goal?

“I work in a non-traditional hockey market, and for a team that struggles,” Moller said in his broadcast booth prior to the game. “We’re not going to make the playoffs for a ninth straight year. If I can help in some way the fans enjoying our broadcast and helping with the team and stuff, I’m all for it.”

In his three seasons calling games, Moller, a gregarious personality, has added movie lines, song lyrics and other pop culture references to Panthers goals when he feels it’s appropriate.

A sampling of Moller’s calls: “Get off my lawn!” (“Grand Torino”); “I would do anything for love, but I won’t do that!” (a Meatloaf song); “I just ate his liver!” (“The Silence of the Lambs”); “Beyonce had one of the greatest music videos of all time!” (Kanye West at the MTV Video Music Awards).

The 13-year NHL veteran, the only ex-player to ever do play-by-play full time, has developed a rabid following. Clips of the goals on Youtube.com have hundreds of thousands of hits. He’s interviewed several times a week by media outlets all over North America.

When Moller served as a color commentator, fans enjoyed “Mollerisms” like, “Top shelf, where Mrs. Moller keeps the peanut butter!” After Moller switched duties, Dan LeBatard, who hosts an afternoon show on the Panthers’ station, prodded the 46-year-old to incorporate some lines into goal calls.

“I did it on a whim,” Moller said. “It was not preconceived or anything.”

Moller has a strict set of rules.

“I’m not interested in doing anything that’s controversial,” he said.

If an opponent’s beating the Panthers soundly, hardly a rare occurrence, he refuses to say anything funny.

“I wish that I’m able to do this with the team in the playoffs, because it’s disappointing,” Moller said.

Someday, Moller hopes he can end that disappointment with a Stanley Cup call. He never won one during his career. Should a Game 7 overtime goal ever clinch a title, Moller has something ready.