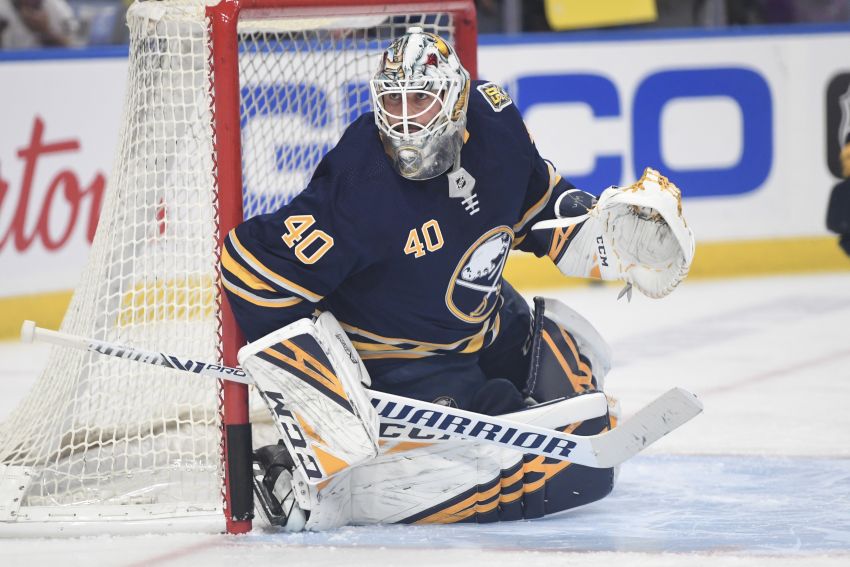 Ex-Buffalo Sabres goalie Carter Hutton planned to become a machinist or millwright. Cracking the NHL, or even earning a college scholarship, was a far-fetched dream.

Hutton, who last week retired from the NHL after nine seasons, wasn’t any sort of prospect.

In his late teens, he was taking a mechanical engineering technician course, working at the local phone company and allowing more than five goals per game in the Superior International Junior Hockey League.

That circuit, of course, doesn’t produce much of big league talent. Only two of its players – Hutton and St. Louis Blues defenseman Robert Bortuzzo, his former teammate – have gone on to the NHL.

Hutton was downright awful in his first season, recording a 1-18-3 record for his hometown Thunder Bay Golden Hawks.

In his second year, he joined the Fort William North Stars and went on a tear, compiling a stunning 43-1-0 mark over his final season and a half.

Fort William, however, made the Royal Bank Cup in 2006, eking into the Canadian Junior A championship thanks to a 7-6 victory that would change Hutton’s life.

“If we don’t win that game to go to the Royal Bank Cup, like, there’s no chance I ever make the NHL, I never go to college,” Hutton told the Times Herald on Friday. “So it’s so fragile, my story, right?”

Hutton’s story is remarkable. He played 234 NHL games, including 94 with the Sabres, and earned more than $13 million, according to capfriendly.com.

But if Jerry Forton hadn’t scouted that Royal Bank Cup, Hutton likely would’ve toiled in junior hockey for another year before beginning a career working with heavy machinery.

“I probably would’ve just kept going to school and played Junior B and who knows what else, right?” Hutton said. “Yeah, it’s crazy how things change.”

Today, Forton is the Sabres’ director of amateur scouting. Sixteen years ago, he was an assistant coach at Niagara. When his old boss, former Purple Eagles coach Blaise MacDonald, lost one of his goalies at UMass Lowell, he needed to replace him in a hurry.

MacDonald reached out to Forton, who recommended the unknown Hutton. UMass Lowell took a flier and offered him a scholarship.

It was Hutton’s only offer.

Over his 12-year career, Hutton, 36, never thought much about the astronomical odds he overcame to simply play NCAA hockey or get a sniff of the pros.

“In the moment, I was always kind of like focused on my day-to-day (duties) and the way I carried myself,” he said. “But looking back now, yeah, it’s obviously like crazy to think how far (I came), the situation I was in, right?”

The San Jose Sharks awarded Hutton an entry-level contract in 2010. He made his NHL debut with the Chicago Blackhawks in 2012-13, a year after spending 11 games in the ECHL.

“At each level I just got a chance and then I kind of kept figuring it out, right?” he said. “I never really dominated any level, so I just kind of kept getting better and better until I was good.”

He made the NHL for good in 2013-14, and mostly served as a backup for five seasons with the Nashville Predators and St. Louis Blues. After posting a league-best .931 save percentage with the Blues in 2017-18, he was a hot commodity as a free agent.

Hutton said he chose the Sabres because they offered him a chance to be a No. 1 netminder.

“I wanted to go to Buffalo because I just wanted the challenge of trying to be a starter,” said Hutton, who signed a three-year, $8.25 million deal with the Sabres. “I feel like I would’ve regretted not like taking a shot at it, like being the guy. It was just an organization I liked. … You wanted to go in there and help turn it around.”

He helped the Sabres turn it around early in his first season, notching eight victories during their 10-game winning streak. But the Sabres, who ranked first overall late that November, imploded and missed the playoffs.

Hutton battled injuries and often struggled over the next two seasons, losing playing time to Linus Ullmark. In the midst of the Sabres’ 18-game winless streak in 2020-21, he suffered a season-ending ankle injury.

He thought that might be the end of his career, but the Arizona Coyotes signed him to a one-year, $750,000 contract last year.

“I didn’t even think I’d get this one, truthfully,” Hutton said of the 2021-22 season. “After that injury and the way it was and coming off the season I had, I was kind of prepared at that point.”

The ankle bothered him so much he did not skate until September. He played three times for the Coyotes, posting a 7.76 goals-against average before suffering a knee injury.

He never played another game. After the Coyotes traded him to the Toronto Maple Leafs on Feb. 21, he stayed in Arizona until about April.

“I kind of just was almost retired,” Hutton said.

He joined the Leafs and continued his rehab, and he ended his career backing up a few games as the Marlies, their AHL affiliate, pushed for a playoff spot.

“The plan for me was never really for me to play,” he said going to the minors. “I was kind of just was helping out almost. I didn’t really want to play, either. Like, I didn’t want to come in and their whole season was on the line. I just didn’t think it was fair.”

For now, Hutton, who said he had been ready to retire “for a while,” plans to enjoy time at home in Thunder Bay, Ontario. He has two young children and business interests. He still, however, plays hockey on Wednesday nights.