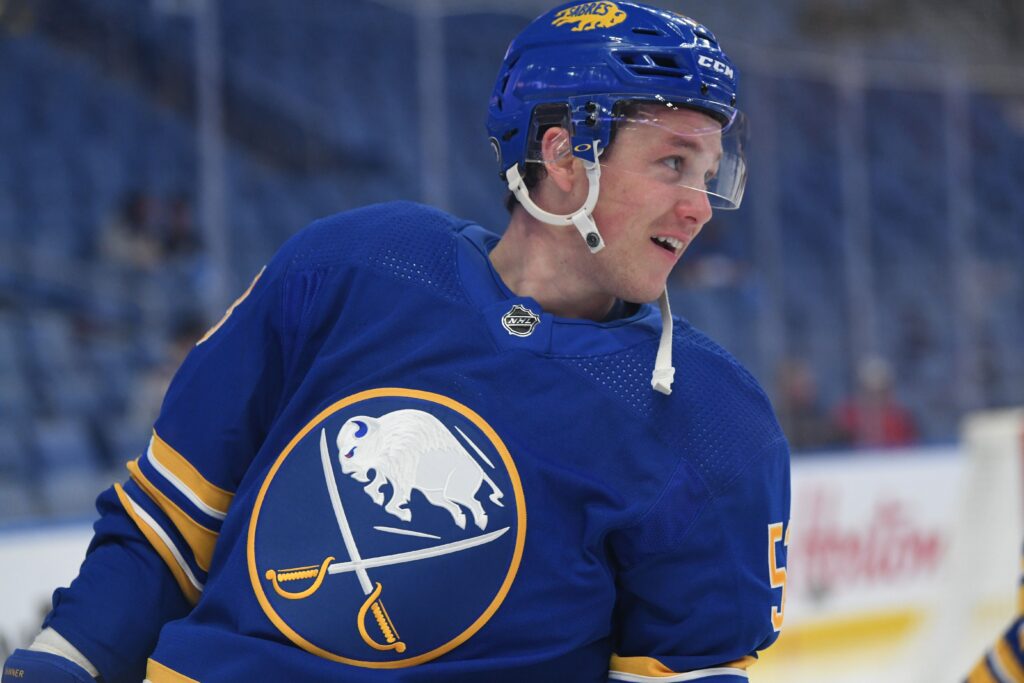 In the two seasons following his scintillating 40-goal campaign in 2018-19, it appeared Sabres winger Jeff Skinner would never recapture the scoring prowess he possessed throughout that career year.

Skinner, who enjoyed a dynamic afternoon in Sunday’s 5-3 win, scoring a career-high four goals and adding an assist, looked finished as an elite NHL scorer.

Last season, Skinner scored just seven times in 53 games and was scratched three times. In 2019-20, he recorded 11 of his 14 goals in the first 28 contests and endured a 23-game goal drought.

But Skinner, 29, has put together a terrific comeback season, and Sunday against the hapless Montreal Canadiens, he was dominant while hitting the 20-goal mark for the eighth time in his 12-year career.

“It’s awesome,” Tage Thompson, Skinner’s center, said on a Zoom call from Bell Centre. “It’s a great feeling for everyone in the room when he’s playing well. You can see just the way he is on and off the ice right now. He’s got his confidence going and it’s fun to be around.

He added: “He was all over the puck. He was relentless. I thought our line did a good job of hounding their D, making them force turnovers. When Skinny gets the puck in the slot, he’s pretty dangerous. So it was one of those nights for him where everything was going in.”

Right now, Skinner is scorching. He has scored 12 times in the last 18 games, the NHL’s 12th-highest total over that stretch. Sunday was his sixth outing this season in which he has recorded at least two goals. It was also his first five-point game in the NHL.

His four-goal effort was the Sabres’ first since ex-captain Jack Eichel enjoyed a career-best night Nov. 16, 2019 and just the 14th in franchise history.

Skinner opened the scoring 3:41 into the game, tipping defenseman Casey Fitzgerald’s shot by Canadiens goalie Samuel Montembeault in the slot. He scored from above the left circle 10:15 into the second period, restoring the lead.

He registered his third goal and put the Sabres up 4-3 when he zoomed through the slot and scored 8:16 into the third period. The puck went in when it hit his skate after Canadiens defenseman Jeff Petry hauled him down.

It took Skinner a few seconds to realize he recorded his sixth NHL hat trick and first since Oct. 20, 2018.

“I didn’t know until the guys came up to me,” said Skinner, who’s in the third season of an eight-year, $72 million contract. “Yeah, I got a little bit of a lucky bounce there.”

Skinner scored his fourth goal 18:14 into the third period, backhanding a shot in from the slot and sealing the game. He was also on the ice when the Canadiens pulled Montembeault for an extra attacker.

After a solid start this season, Skinner had been building toward a slick performance like Sunday’s.

Skinner and his linemates, Thompson and Alex Tuch, have quickly developed splendid chemistry in about six weeks together. Tuch assisted on three of Skinner’s goals Sunday. The only goal Skinner did not score, Thompson’s power-play tally, he assisted on.

“We’re just doing a good job reading off each other,” Skinner said of the trio. “When we get an opportunity on the forecheck, we have a second or third guy pretty close and if there’s a puck turned over, we’re able to get to it pretty quick and we know where each other is right after that turnover happens.

“I think on a couple of goals there’s quick turnover, you try to force those turnovers and there’s a quick transition. That’s when you have the best opportunity to maybe strike back and we were able to capitalize on a couple of those today.”

Sabres goalie Craig Anderson made 29 saves, including 13 in the third period, to earn his 297th NHL victory, moving past Ron Hextall into 40th place on the all-time wins list.

“A credit back to our guys in the third period, specifically Craig Anderson, who stayed calm, never rattled at all,” Granato said. “We had some simple mistakes in the second that he couldn’t bail us out on, obviously.

“But in the third, he bailed us out a couple times and just instilled some great calm to allow us to not tighten up, to continue to push forward and push through it.”

Granato made one lineup change on defense, scratching Mark Pysyk, the only Sabre to have played every game this season, so Jacob Bryson could return.

Bryson was scratched for Thursday’s 4-3 overtime loss to the Columbus Blue Jackets.

Granato, who said he will begin rotating defensemen, did not want to pull out Fitzgerald or Mattias Samuelsson, two rookies.

“For Pysyk, he’s been great for us,” Granato said. “Really good for us. He’s a leader for us. But Fitzgerald’s been great recently. Samuelsson’s been good. (Rasmus Dahlin) and (Henri Jokiharju) have been really good, our top pair.”