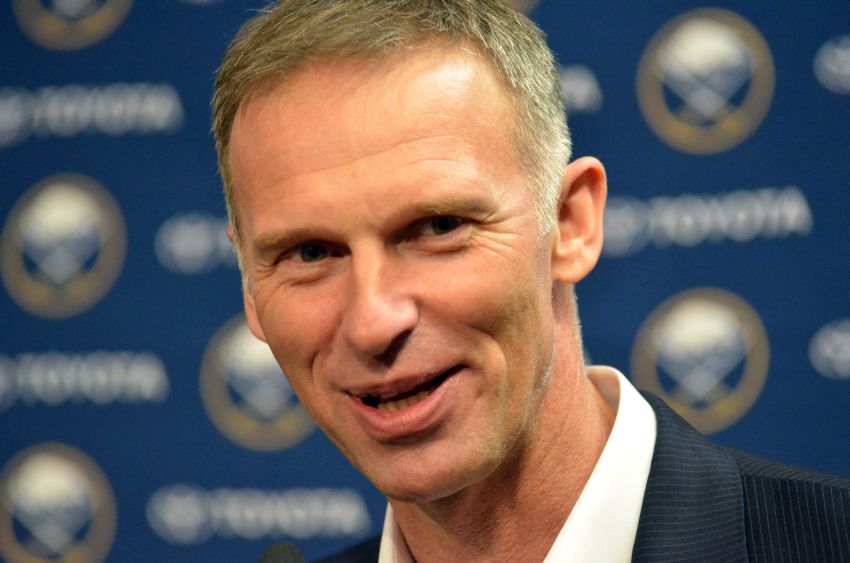 BUFFALO – They hadn’t spoken in almost 17 years, since Ted Nolan’s first run as coach ended amid speculation Dominik Hasek, his star goalie, had just quit on the Sabres during the playoffs.

But Nolan’s back coaching the rebuilding Sabres, perhaps days away from receiving a contract extension. Hasek, having finally retired, is being inducted into the team’s Hall of Fame tonight.

Time, of course, can heal old wounds. Hasek said he was “looking forward to seeing” Nolan.

“I know there was some question, the relationship between me and him, but what can I say?” Hasek, whose No. 39 will be retired next season, said Friday morning inside the First Niagara Center. “I believe he is the coach right now and he will help the team to improve. The team needs to get better.”

Following their “nice chat,” Nolan said he still doesn’t “know what really transpired back then.”

“But back then is back then,” he said later Friday after the Sabres prepared for tonight’s game against the Tampa Bay Lightning. “He looks well and he’s all happy and excited about being back here. We had a nice talk. We had some good times. Everybody looks at one incident. One incident doesn’t form the relationship.

“Sometimes you feel (a) different way than the other person,” Hasek said. “Sometimes you feel that your decision is better than his decision. But on the ice, the one or two years we were together, we did a good job for this organization.”

Much of that success, Nolan said, can be traced to Hasek’s dynamic goaltending.

“We had a lot of wins, but a lot of wins were based on his goaltending,” he said. “He’s a world-class goaltender. To come back here to the city of Buffalo and get recognized the way he has or the way he’s going to be, it’s a good honor. It’s a good to see him back.”

Hasek swears he’s retired from hockey. Remember, the 49-year-old left the NHL three times. He hasn’t played professionally since his one-year stint in the Russian KHL ended in February 2011.

His goalie equipment hasn’t left the bag since then, Hasek said. These days, he plays once or twice a week as a defenseman in a rec league back in his native Czech Republic.

“You wake up and you enjoy your life different ways,” Hasek said.

Pardubice, his old Czech club, retired Hasek’s number Dec. 1, an official sign he was done, he said. The Sabres announced Friday that No. 39 would become the seventh number retired in franchise history. Hasek will almost certainly become a first-ballot inductee into the Hockey Hall of Fame in June.

Hasek, who’s involved a bit in hockey and in some business ventures, said he has always has new goals and something to prove.

“The hockey career is something that is behind me,” he said. “What great years.”

“The Sabres always stay in my heart,” he said. “So I know what’s going on.”

He added: “I always stay very close to the Buffalo people.”

The Sabres’ sorry state – they’re the league’s worst team and have lost 11 of the last 13 games – hasn’t shaken his belief “one day Buffalo win the Cup.”

“It will be with some other people,” Hasek said, “and this city deserve to win one day. I don’t know when it’s going to happen, but one day it will happen.”

The Sabres nearly won a championship in 1998-99, when Hasek backstopped them Game 6 of the Stanley Cup final.

The loss doesn’t haunt Hasek, who won the Stanley Cup with Detroit in 2002, a year after he demanded the Sabres trade him.

How does Hasek, who won the Vezina Trophy a stunning six times, want to be remembered?

“As a great goalie, as the personal goalie who gave the team (a chance) to win the game,” he said.