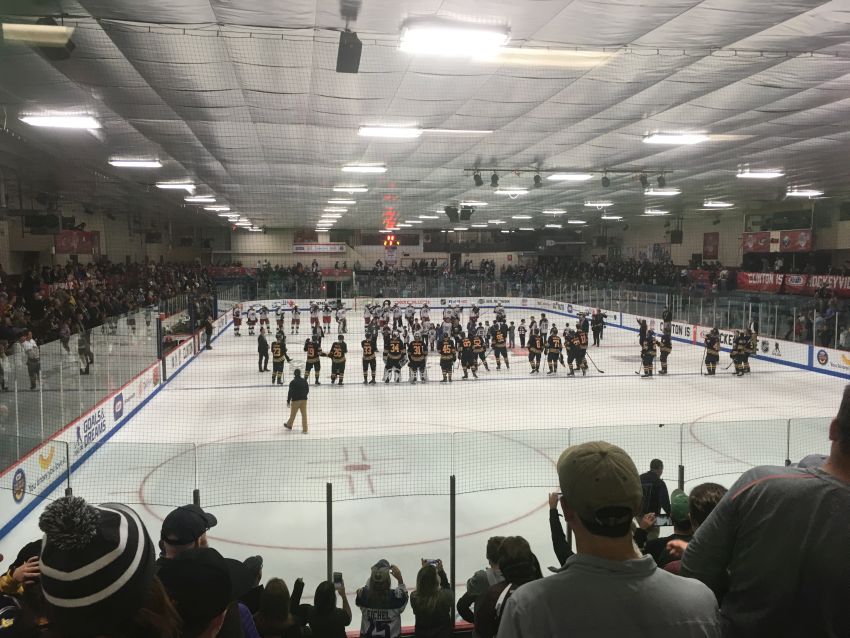 CLINTON – This village of about 1,900 has some hockey history, you know.

In the late 1950s and 1960s, long before Tuesday’s Kraft Hockeyville NHL preseason tilt between the Buffalo Sabres and Columbus Blue Jackets, the 2,000-seat Clinton Arena housed a pro team in the Eastern Hockey League called the Clinton Comets.

Eddie Giacomin, a Hall of Fame goalie, played for the Comets prior to his days starring for the New York Rangers.

Hockey arrived in Clinton 100 years ago, according to Andy Burns, who organized a centennial celebration of the sport here earlier this year. Albert Perryman, the athletic director at nearby Hamilton College, wanted his son to play hockey, and soon it became part of the fabric of the community.

In the 1920s, an outdoor rink was built. By the 1940s, the local men’s team became so successful Clinton constructed in indoor facility. When the rink burned down in 1953, it was rebuilt on the same plot in four months, Burns said.

The Clinton Comets, whose roster comprised some players who were on their way up or down from the NHL, joined the EHL in 1954, according to hockeydb.com.

“These are guys that would’ve been in the NHL today with so many teams,” he said. “There’s smoke and beer and fights and no glass on the sides.”

The Comets left in the early 1970s, but the hockey presence in the area is still strong. The Utica Comets, the Vancouver Canucks’ AHL affiliate, play about 15 minutes away.

When Burns, who now lives in Chapel Hill, North Carolina, put together the 100-year celebration, he said 1,000 former players from Clinton College and the local high school participated.

“We just partied, had a great time,” he said.

Then it dawned on him Clinton should push for Hockeyville, which awards an NHL exhibition game and $150,000 in arena upgrades to the winner of an online voting contest.

“Let’s go win this damn Kraft Hockeyville,” he said. “So we had all that enthusiasm.”

It looked like nearly everyone in town showed up to the morning skate Tuesday. Fans greeted players in the rain as they entered the building and watched the teams practice as music blared.

“I think it’s great,” Sabres coach Phil Housley said of playing in such a unique place. “It just brings you back to your childhood memories. Guys are sitting in the locker room there and they’re all tight, we’re doing our meetings. It was a great feeling, because you draw back from that when you were a kid playing with your buddies.”

Sabres defenseman Zach Bogosian grew up in Massena, about a three-hour drive north. While he had never played in Clinton Arena, he skated against teams from Clinton growing up. Riding the bus from the airport in Rome took him back to his childhood.

On Tuesday morning, Burns felt that watching the Sabres prepare for the game.

“It’s absolutely unbelievable,” Burns said of seeing NHL players on the ice in Clinton. “This is what it is was like when I was kid watching the Clinton Comets, except these guys are a lot bigger.”

The spartan arena probably doesn’t look much different today than it did in the 1950s. The original scoreboard, an odd-looking clock made of plywood and pinball machine parts, according to Burns, still hangs, although it is not used for games.

Burns said the prize money could be used for the roof and to hire an architectural firm to plan renovations for a large project that would require fundraising.

Winger Artemi Panarin scored the go-ahead goal 6:21 into the third period in the Blue Jackets’ 4-2 win.

Wheatfield’s Adam Clendening tied it at 2 late in the second period. The defenseman signed a one-year, two-way contract with Columbus worth $700,000 in the NHL and $300,000 in the AHL on July 1.

Sabres goalie Scott Wedgewood played the entire game. The Sabres dressed a strong lineup, most of their American-born players, including star center Jack Eichel, who assisted on Reinhart’s goal.

“It was cool,” Eichel said of Tuesday’s experience. “I think just being able to do this, it’s a unique experience. Obviously, really cool for the people of Clinton.”

NHL commissioner Gary Bettman, speaking during the first intermission, on the Sabres: “By all appearances, the team is on an upward spiral. You look at the young talent they have and you look at the moves they made over the summer, among those acquiring Skinner, I think the team’s being rebuilt in the right way. But it starts with the fact (owners) Kim and Terry (Pegula) are passionate about the Sabres.”

Notes: The Sabres play a road game tonight against the Pittsburgh Penguins. … Nelson said Clinton Arena reminded him of old school hockey. “We watched ‘Slap Shot’ today, so it was pretty similar.’ Some scenes from the classic hockey movie were filmed in nearby Utica. … Housley said Buffalo’s dressing room had a window.