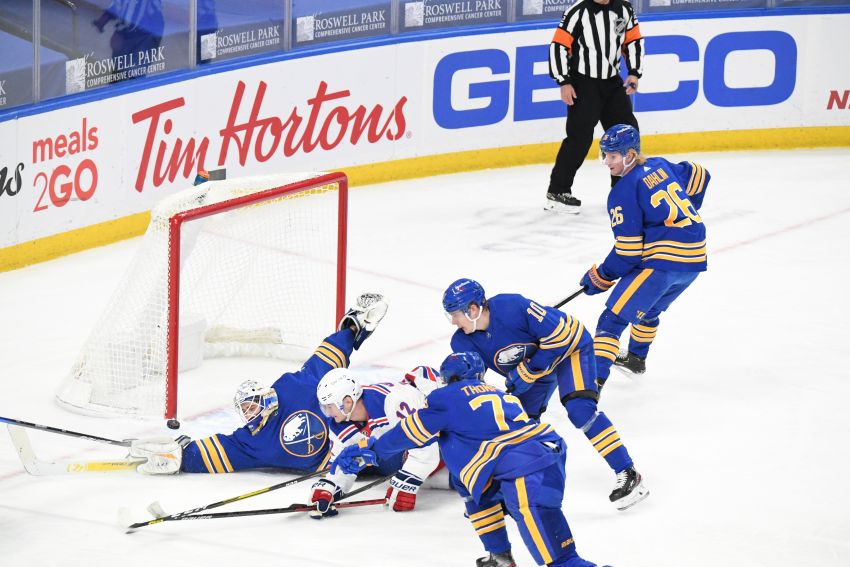 A season-opening four-game home stand, two contests against the expansion Seattle Kraken and four meetings with the Toronto Maple Leafs are among the highlights of the 82-game 2021-22 Buffalo Sabres schedule the NHL released Thursday.

The Sabres open the campaign Oct. 14 against the Montreal Canadiens at KeyBank Center and also host the Arizona Coyotes, Vancouver Canucks and Boston Bruins before playing their first road game Oct. 23 versus the New Jersey Devils.

The Sabres play Nov. 4 in Seattle, the final game of a four-game western road trip, and host the Kraken on Nov. 29.

Last season, the COVID-19 pandemic forced the NHL to temporarily realign and switch to a truncated 56-game intradivisional schedule. In 2021-22, every team will face each other at least twice.

The Sabres play five of their Atlantic Division opponents – the Bruins, Canadiens, Leafs, Detroit Red Wings and Florida Panthers – four times each and the Ottawa Senators and Tampa Bay Lightning three times each.

The Sabres have a 24-day break and only three games scheduled in February because NHL could renew its Olympic participation and send players to the Beijing Games. If the NHL and the NHL Players’ Association can’t reach an agreement, a revised schedule will be released.

Some other notable dates, stretches and nuggets from the Sabres’ slate:

– The Lightning, which won its second consecutive Stanley Cup earlier this month, visit Buffalo on Oct. 25 and Jan. 11. The Sabres play April 10 in Tampa Bay.

– Superstar Connor McDavid and the Edmonton Oilers make their lone visit to Buffalo on Nov. 12.

– The Sabres play their first game in Canada on Dec. 14 against the Winnipeg Jets.

– The Sabres have 17 sets of back-to-back games.

– The Sabres play five of their first six games at home.

– The Sabres close the season April 29 at home against the Chicago Blackhawks.

– The Sabres don’t have a home stand or road trip longer than four games.

– Start times for every game will be released later.

Sabres general manager Kevyn Adams said while it was tough to lose Will Borgen, the defenseman the Kraken claimed in Wednesday’s NHL Expansion Draft, he won’t fret over it.

“We didn’t want to lose anyone,” Adams said Thursday in the KeyBank Center pavilion. “I’m a big fan of Will as a person, as a player. High character. And Seattle got a good one there. Fact of the matter is, the rules are out to put the expansion team in a pretty good position that they’re going to get a player from every team that they like. So you understand what’s coming. You look at every possible scenario.

“But you have to be … really careful making an emotional decision, or trying to do something where maybe you’re giving up more assets just to save some things. So it’s a challenge.”