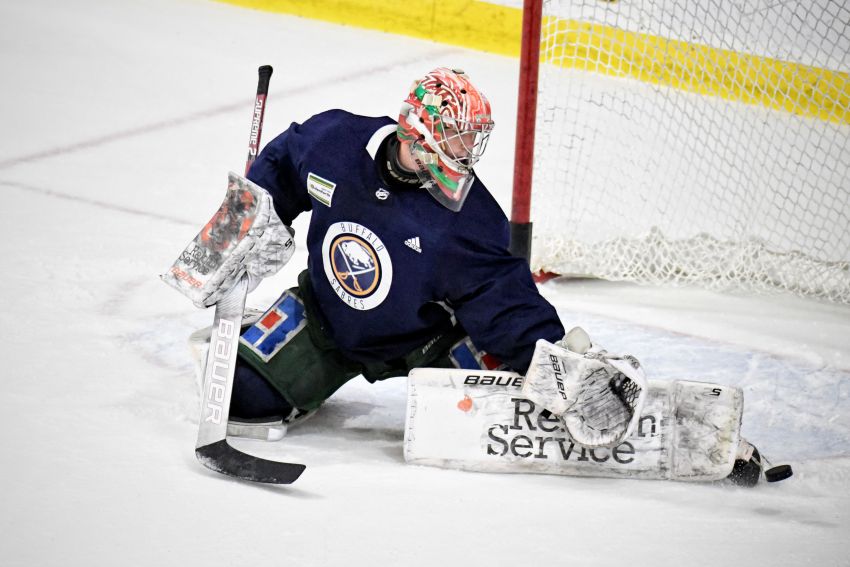 BUFFALO – Now that the Sabres have signed defenseman Owen Power to his entry-level contract, their attention can turn to two other top college prospects, goalie Erik Portillo and defenseman Ryan Johnson.

Kevyn Adams said he has already chatted with Portillo, 21, and Johnson, 20, both of whom suffered season-ending losses Thursday at the Frozen Four.

“You want to be respectful because these guys have put their heart and soul into something and trying to win a national championship, and then, like, it just ends,” the general manager said on a Zoom call Friday to discuss Power’s contract. “There’s a lot of emotion and you want to be respectful of that. But we have already been in conversation with both of them, making sure that I reached out last night and today, a number of conversations just to kind of make sure they knew where we are and just start that dialogue, and we’ll continue to do that.”

Portillo, 21, just completed his sophomore season with Power at Michigan. They have the same agent, Pat Brisson, and Adams said he has spoken with him about Portillo.

The Swede, a third-round pick in 2019, 67th overall, has established himself as one of the NCAA’s top goalies.

Update: Portillo will be returning to Michigan for his junior season, according to Sportsnet’s Elliotte Friedman.

Devon Levi, another Sabres goalie prospect, said earlier this week he will be returning to Northeastern for another season. Levi on Friday earned the Mike Richter Award as the NCAA’s top goalie.

If Portillo wants to turn pro, he might have more playing time available to him.

Still, Michigan will almost certainly have another championship-caliber team again next season. Could that lure Portillo back for another year?

Meanwhile, Johnson, 20, just finished his junior season at Minnesota. The defenseman, the 31st overall pick in 2019, would be joining an organization with a crowded blue line.

Power and NHL regulars Jacob Bryson, Rasmus Dahlin, Casey Fitzgerald, Henri Jokiharju and Mattias Samuelsson are all under 25 or under.

Johnson can become unrestricted free agent next year. He might see the grass as greener somewhere else.

In 2007, Okposo wanted to leave Minnesota following his freshman year. The New York Islanders, who drafted him seventh overall the previous year, preferred he stayed in school another year.

“I said, ‘I want to come to camp, and if I earn a spot in the NHL, then great. And if I don’t, then I go play in the minors,’” Okposo told the Times Herald on Wednesday. “I just thought it was time for me to turn pro, and that was where my mindset was.

“There was somebody in the Islanders organization that felt I should go play in junior hockey instead of going back to college. And I just said that’s a lateral move, I’m not going to do that. So I went back to school, and, admittedly, I didn’t have the best mindset going it.”

Okposo said he carried the disappointment of not turning pro.

“I struggled mightily at the start of that year,” he said.

Still, he had no intention of leaving school during the season. Then the Islanders contacted him around Christmastime, and he signed a contract.

“They drafted me as a winger, they wanted me to play wing, I was playing center,” Okposo said. “They were kind of seeing where my year was going and they called me and said they wanted me to come out of school. And that was a really hard decision.

“There’s still people in Minnesota that give me grief about it to this day. And it’s not something that I wish on anybody, leaving the team halfway through the year. It wasn’t a good thing.

“Looking back on it, it was a really difficult decision. And I don’t know if I’d make a different one now, but it was just a really tough situation to be put in. But it all worked out and I still talk my college teammates a bit.”

Okposo said when you’ve dreamed your whole life of playing in the NHL, it’s hard to say no when that contract is in front of you.

“I know there’s definitely still an element to that and a huge element, a pull to that for all these guys,” he said. “But … you just want to make sure everybody’s making the decision for the right reasons. Everybody has their own situation. I don’t think anybody can judge others when they don’t have the full scope of what’s going on.”