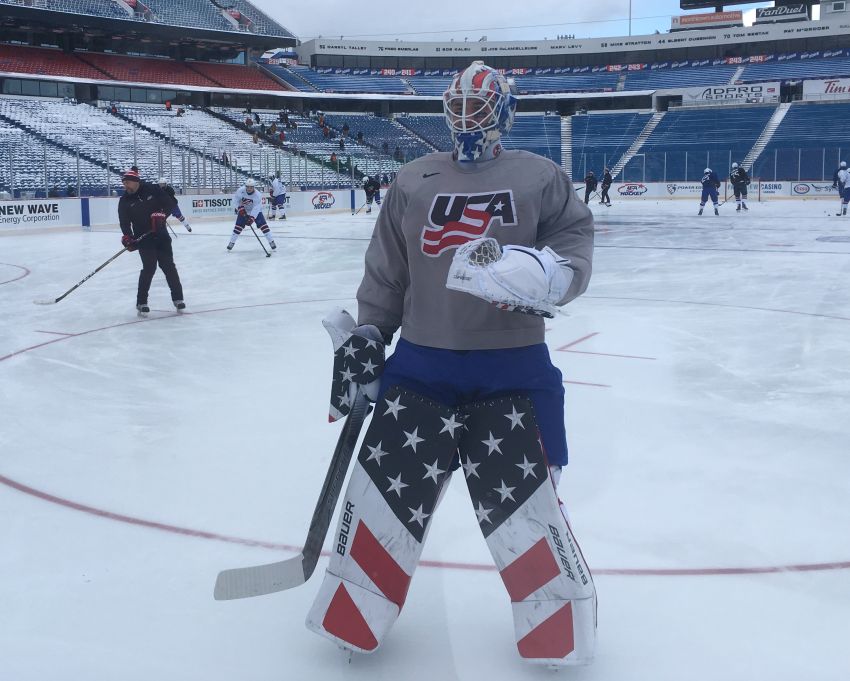 ORCHARD PARK – Right away, Team’s USA’s Bob Motzko experienced what he called a “wow moment.” Over his 30-year career coaching college and junior hockey, he has never participated in an outdoor game.

So walking out of the New Era Field tunnel Wednesday afternoon and seeing an ice rink in the middle of the 72,000-seat NFL facility, the home of the Buffalo Bills, was “pretty cool,” Motzko said.

“I’ve only seen (outdoor games) on TV,” Motzko said after the U.S. practiced in the frigid cold. “That’s the first time I’ve stepped out there, an NFL stadium, (and seen) a hockey rink sitting there.”

The rink is ready for Friday’s World Junior Championship preliminary-round tilt between the U.S. and Team Canada, the first-ever outdoor game in tournament history.

The fierce rivals seemingly play a memorable game every year. The Americans edged Canada for gold a year ago in a five-round shootout.

Hockey-wise, Friday’s 3 p.m. contest might not reach the caliber of past meetings. Outdoor games are often hindered by the elements.

Still, if Wednesday’s brief practice is any indication, the contest could be unforgettable. Following practice, the Americans changed into their game jerseys and posed for photos.

“They’re acting like kids again, we all were,” Motzko said. “(It was) fun to be out there. You kind of get a feel it’ll be a great, great environment.”

While the snow held off Wednesday afternoon, workers were clearing the remnants of a recent storm from the stands. The snow around the rink made for a postcard-pretty scene.

Friday afternoon’s forecast calls for a chance of snow showers and a high of only 18 degrees, according to weather.com. With the temperature barely getting into the teens Wednesday, players wore extra layers and protection under their helmets. Most also sported eye black for the sun.

“At first, I think it’s a little chilly, but it really grows on you,” he said.

Motzko said: “I didn’t get cold at all. I was surprised. I was pretty bundled up, too.”

What about the ice? Not surprisingly, some divots developed, something Motzko said he expected. But the coach and his players said the surface was fast.

“The way they can put an ice surface on a football field like that, and for it to be that good, it’s something pretty crazy,” said U.S. forward Max Jones, an Anaheim Ducks prospect.

For Motzko, Wednesday offered a nice diversion. His team has been staying in hotels since convening for training camp in Columbus two weeks ago.

Of course, the U.S. doesn’t want to think too much about Friday. The team plays Slovakia tonight at KeyBank Center. Given a high-profile game in a unique setting awaits the U.S., it would be easy to look ahead.

After tonight’s game, getting the Americans to focus on Canada should be easy for Motzko.

“There’s certain games that come through you don’t have to say a certain word to your players, they’re ready to go,” Motzko said. “This is one of them, that you walk in the locker room, there’s a little different feel, it’s amped up. That’s what rivalries are all about, there’s a little juice in the air. You can just feel it on those.”

One thought on “Team USA excited for outdoor game”