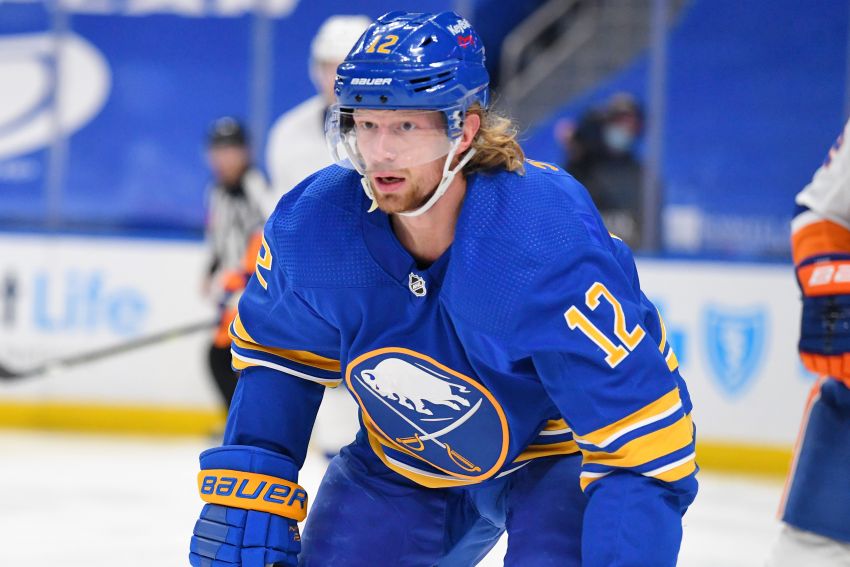 Winger Victor Olofsson has provided the Sabres’ only offense, scoring a power-play goal Monday and again in Thursday’s 3-1 road loss to the Washington Capitals.

“Everybody’s trying to play within the principles, they’re trying to execute properly and almost squeezing our sticks too hard once we have (an) offensive opportunity,” Krueger said on a Zoom call Friday.

Clearly, the Sabres’ biggest offensive threats – captain Jack Eichel and wingers Taylor Hall and Jeff Skinner – have been pressing. Eichel has scored only two goals this season and just one at even strength. Hall scored a power-play goal way back on opening night. Skinner, incredibly, is still goalless.

So $27 million worth of talent has scored just three times this season.

“There’s definitely some fragility there when teams are not finding success,” Sabres center Eric Staal said. “When a lot of your top guys are pressing hard to score and be difference-makers and it’s not working, it can be difficult.”

The Sabres, who continue their four-game road trip this afternoon against the New Jersey Devils, have been forced to rely on the power play. They’ve mustered only 15 five-on-five goals in 13 games, including just five in the last eight outings.

A strong power play – the Sabres have converted 31.1% of their chances, scoring 14 times – usually acts as a catalyst for the five-on-five attack.

“So I’ll be really honest with everybody here that I’m trying to figure that out.”

Staal said: “Everyone knows the type of talent and the players that we have here. It’s just about finding solutions to having success. That’s not going to stop until it changes over.”

Krueger believes the fragility he sees is limited to the offensive side. He said, for example, the Sabres have held their opponents to an average of 10 five-on-five scoring chances game this week.

“There is definitely not a fragile mindset to the way we’re trying to play and why we’re trying to do what we’re doing,” he said. “We feel a total buy-in here on what was forever an Achilles in the organization and also last season at times, was the defensive structure of the group. So there is a commitment there to what we need to have happen without the puck.”

Krueger said when he speaks about fragility, it means confidence.

“We’re speaking about those final percentage points that separate the top scorers from the average players in the league,” he said. “And we’ve got elite players in this group. That are – in that final context of the game – they’re fragile right now.

“They don’t believe in themselves and they don’t see themselves celebrating. They see themselves missing the net, hitting the shaft of the goalie, not finding the hole between the legs that they usually find.”

The Sabres have insisted throughout their struggles they’ve remained in a good place mentally. Krueger said he sees any frustration “staying in a very small picture and small moment.”

“Again, results are what matter, they need to come, but that’s what gives me the confidence that the results will come.”

One thought on “Sabres trying to generate offensive confidence: ‘Definitely some fragility’”