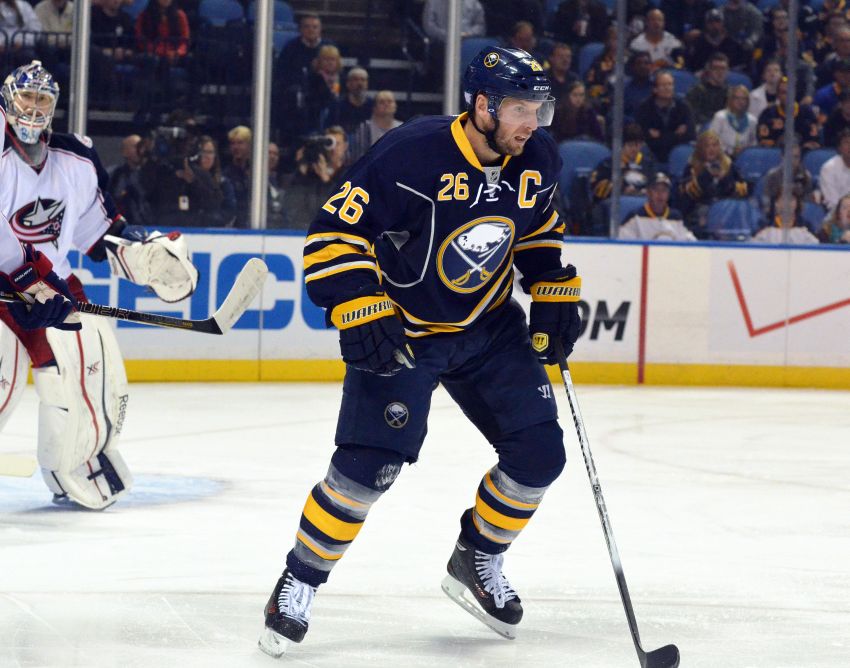 BUFFALO – In the short-term, the hapless Sabres are no better after dealing co-captain and top scorer Thomas Vanek to the New York Islanders late Sunday for 30-goal winger Matt Moulson and a first-round pick in 2014 and second-round selection in 2015, general manager Darcy Regier said.

But the shocking trade, which Regier worked on with counterpart Garth Snow “off and on for a while,” wasn’t about improving the 2-10-1 club immediately.

“This is more the overall deal, which I believe will improve this hockey club moving forward,” Regier said inside the First Niagara Center.

The rebuilding Sabres, who’ve been selling off veteran assets since April, have now accumulated 17 first- and second-round picks for the drafts from 2012-15.

“I don’t love where we are,” Regier said about the bottom-feeding club. “I love what we’re doing, and I believe in the direction that we’re going.”

Given the Sabres’ wretched start, many believed the 29-year-old Vanek, one of the NHL’s slickest wingers, wanted out. The Austrian, an unrestricted free agent following the season, has said he would look elsewhere if the rebuilding process was long.

But Regier said he didn’t know if Vanek had closed the door on re-signing with the Sabres, who drafted him fifth overall in 2003.

“The absolutely sure thing I don’t think was possible given where we were, where we look at the core group,” he said. “I think our focus is on trying to acquire assets, in this case draft picks.”

What was Vanek’s reaction to the deal?

“Like a lot of players, he was shocked, very professional,” Regier said. “I thanked him. He was good. He was as good as he could be.”

Regier, who’s notorious for holding onto players until he gets the deal he wants, believes he got the best return he could right now.

“Could that change down the road hypothetically?” Regier asked. “Who knows?”

Clearly, the reeling Sabres, who have an NHL-low two wins and five points, needed to make some sort of move. They host former Sabres coach Lindy Ruff and the Dallas Stars tonight still looking for their first home win.

But Regier said outside influences didn’t force the deal.

“I don’t want to show any lack of respect to our fans, but internally it’s … just doing the work and focusing on what our plan is and just executing it as well and as soon as possible, and that is on behalf of the fans,” he said.

Having scored 254 goals and 497 points in 598 games, including four scores and nine points this season, Vanek leaves town one of the best players in franchise history.

Vanek grew from an enigmatic rookie to a respected presence on and off the ice during his nine seasons. Sabres coach Ron Rolston named him a co-captain with Steve Ott earlier this month.

The 29-year-old’s also an unrestricted free agent following the season.

“He’s got six goals … and is off to a good start and is a goal scorer and plays in the hard areas, on the power play,” said Regier, who said Moulson should join the Sabres this morning.

What about Moulson’s future? He could fetch another high pick at the trade deadline.

“Right now, he’s here for the rest of the season,” Regier said.

“I’ve really had no discussions as of late with respect to any of our other potential free agents,” Regier said.

Regier said he talks to about 10 of the league’s other GMs “about a lot of things” and he would “leave it at that.” The market, he said, is slow because of the hectic schedule and so many injuries. Still, he said there are more conversations than in the past.

Even with a long contract and ownership’s support, Regier’s probably under more pressure now than at any other point of his 16-year tenure.

Regier, however, said he likes to “operate as though it’s a challenge.” That operation, he said, has “maybe a little more directness than the early years.”

Regier said he understands it’s hard to patient with such a young lineup.

“It is exciting when you can get young players. You can see them grow,” he said. “The hard part is when you don’t win games when they’re growing, and it makes it difficult. But the nature of this business is short-term pressure and it’s a long-term plan that’s going to get it done, and you have to deal with those two.”