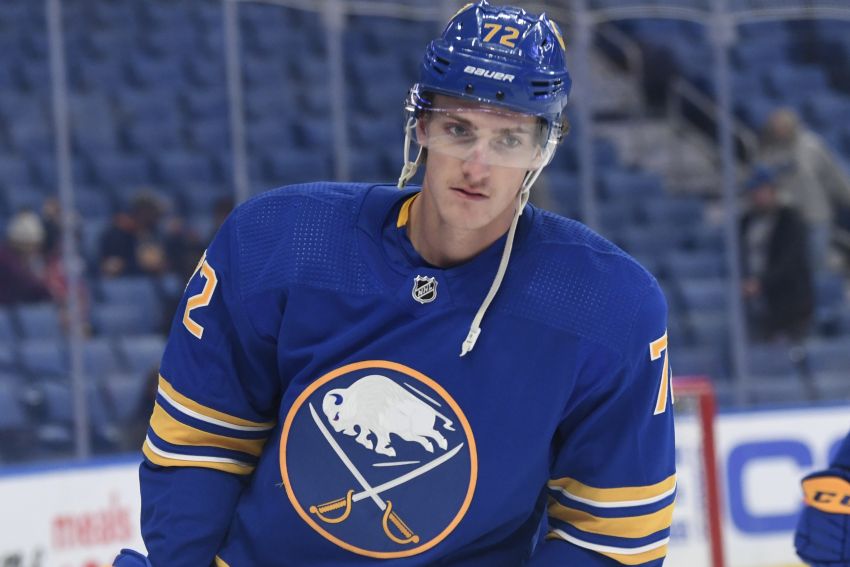 BUFFALO – Tage Thompson got up angry and looking for revenge after absorbing a big hit from Alexander Romanov at center ice. But instead of going after the Montreal Canadiens defenseman, the Sabres center simply skated into the offensive zone.

A few seconds later, Thompson banged his stick on the ice, calling for puck from linemate Jeff Skinner. After grabbing the pass high in the slot, Thompson beat goalie Samuel Montembeault 3:29 into the third period, his second goal of the night.

Following his team-leading 10th score, Thompson stared down Romanov with the Sabres up three goals.

“I was a little fired up after I got hit there so it was a nice way to pay him back a little bit,” Thompson said on a Zoom call following the Sabres’ 4-1 win. “It’s good. I think when we play with confidence, good things happen. I thought tonight, our whole team did that.”

Right now, Thompson, 24, is so hot he’s developing some swagger.

“I love it,” Sabres coach Don Granato said. “There’s two components. You love it when you see it and when you back it up. So he had both components there.”

Remember, Thompson never scored more than eight goals in a season before this year, when Granato switched him from wing to center late in training camp. Through 19 games, he is scoring at a 41-goal pace.

“We’re all witnessing the benefit of him gaining experience,” Granato said. “It’s turning in the form of confidence each and every day. Even the second goal he scored tonight he took a big hit. It did nothing but make him more possessed and determined and banging his stick. He wanted to score again, and he did immediately after the hit.

“And that shows he was a little ticked off taking the hit, and he said, ‘I’m going to take matters into my own hands here.’”

Thompson, who never had a two-goal game until Monday’s 7-4 loss to the Columbus Blue Jackets, has done in twice in three contests.

The Sabres, having lost four straight contests and 10 of their last 12 (2-9-1) entering the night, sorely needed a get-well game like Friday’s.

Just in the nick of the time, the hapless Canadiens limped into town, giving struggling Sabres a splendid opportunity to, well, win again.

In beating the Canadiens for the second time this season – they throttled them 5-1 opening night – the Sabres played perhaps their best all-around game in weeks.

For just the third time in their last 13 outings, the Sabres held an opponent to under three goals. Yes, their defense and goaltending have really performed that poorly.

Goalie Dustin Tokarski, who was yanked from his last two starts, looked sharp again, stopping 25 shots before the season-high crowd of 9,958 fans inside KeyBank Center.

Granato wanted to rest Tokarski on Wednesday, but Aaron Dell’s weak performance forced him off the bench for the final 40 minutes of a 5-1 loss to the Boston Bruins. Tokarski, however, stopped 24 of the 25 shots.

“I was apprehensive to put him in that (Boston) game, you guys know because I said it,” Granato said. “And then when he had to jump in the game, I thought it took him a couple minutes to get the calm, and once he did, his competitive fire took back over.

“I think he might’ve been in his own head prior to that, fell out of rhythm and was struggling to get back in. And he’s such a competitive guy that works against him at that point. And, yeah, now he feels in sync and that competitiveness shines through.”

Meanwhile, the Sabres’ offense hit the four-goal mark for the third time in their last four games.

Sabres center Cody Eakin broke a tie in the second period before winger Kyle Okposo’s short-handed goal put the Sabres up 3-1. Thompson opened the scoring before Josh Anderson tied it.

The Sabres play a road game tonight against the Detroit Red Wings.