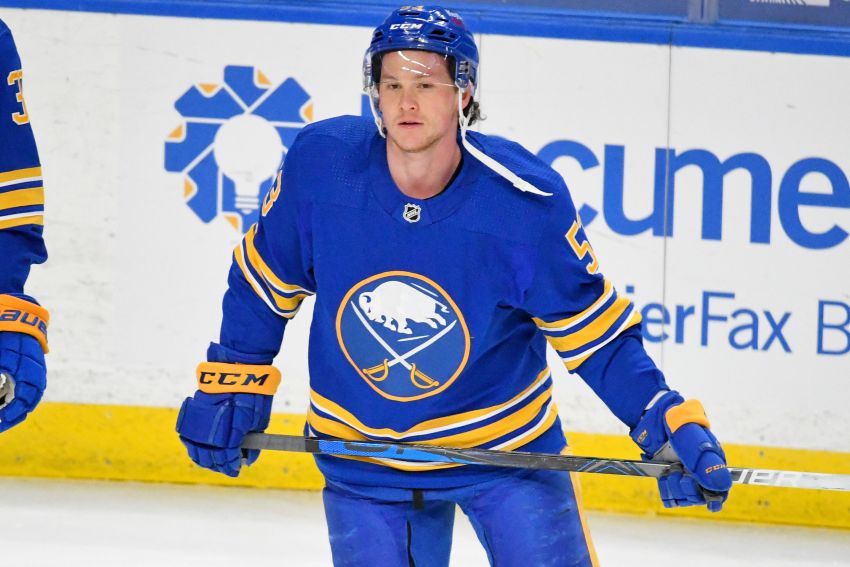 On Sunday afternoon, Don Granato said the Buffalo Sabres’ belief they could roar back and win was stronger and more collective than in previous games. The interim coach could feel it up and down the bench.

The Sabres, who ended their 18-game winless skid March 31, possessed little or no confidence just a few weeks ago. The thought of them erasing an early two-goal deficit and rallying again late like they did Sunday would’ve been outrageous.

Remember, the Sabres had trouble scoring a single goal in many outings under former coach Ralph Krueger.

But they’ve started coming back in games and plowing ahead unfazed when they fall behind. They look like a completely different team under Granato, who keeps making a strong case to have his interim tag removed.

Sunday’s victory, just the Sabres’ 10th this season, was their most exciting in a long time.

After Shayne Gostisbehere put the Flyers up 3-2 early in the third period, Sabres winger Jeff Skinner tied the contest at 16:57 left before winger Rasmus Asplund scored at 17:22.

“Lately we’ve been able to find those plays and that’s what you need, especially late in games,” Skinner said on a Zoom call. “You need big plays in big moments.”

By the 4:42 mark, thanks to Ruotsalainen’s first NHL goal, the game was tied.

“That was a desperate hockey team over there and they need the points,” Sabres winger Kyle Okposo said on a Zoom call. “We knew that they were going to come out hard and they did. We could’ve folded when it was 2-0, and we didn’t. So we’re learning how to win games different ways. You need to do that to become a good team and we’re starting to take steps.”

Granato added: “We’ve had a much better belief system progressively the last couple weeks and it’s getting stronger.”

So what exactly has happened to the Sabres, who are 4-2-1 in their last seven games?

“We’re just starting to realize how we need to play and I think everybody’s getting on the same page in the new system that Donnie wants us to play,” Okposo said. “It seems to be working for our group. We seem to be creating a lot more offensive chances and limiting opponents’ opportunities and that’s been a big positive. Then there’s also kind of the old school, ‘You got to bring your lunch pail’ as well.”

Okposo said in Thursday’s 6-3 loss to the New Jersey Devils, the Sabres’ battle level was weak.

Skinner also took another positive step Sunday, enjoying his first two-point outing this season and scoring for the second time in three contests. He also set up Reinhart’s goal after winning a faceoff in the left circle, quickly moving forward and dishing the puck.

Then late in the game, the puck hit Skinner’s skate and slid by Flyers goalie Carter Hart as Claude Giroux knocked him into the net.

After a video review, the goal counted.

“You don’t want to get your hopes up fully, but I assumed it was going to stand,” Skinner said. “I was going there and I couldn’t even really see the puck, to be honest. I had a hard time thinking I could have kicked it in.”

Skinner, of course, has endured a rough year, getting scratched three times and going goalless in his first 19 games.

Granato said it was nice to see him smile.

“He’s finding a way to do that more,” Granato said of Skinner enjoying more moments. “It’s nice to see because it’s the only way he’s going to play at his peak and get into the zone, shed that baggage. And he did on those plays tonight.

“He went to the net on the goal in the third which was an incredible play to just battle to the net. And off the draw you just saw how slippery he is when he’s on his game.”