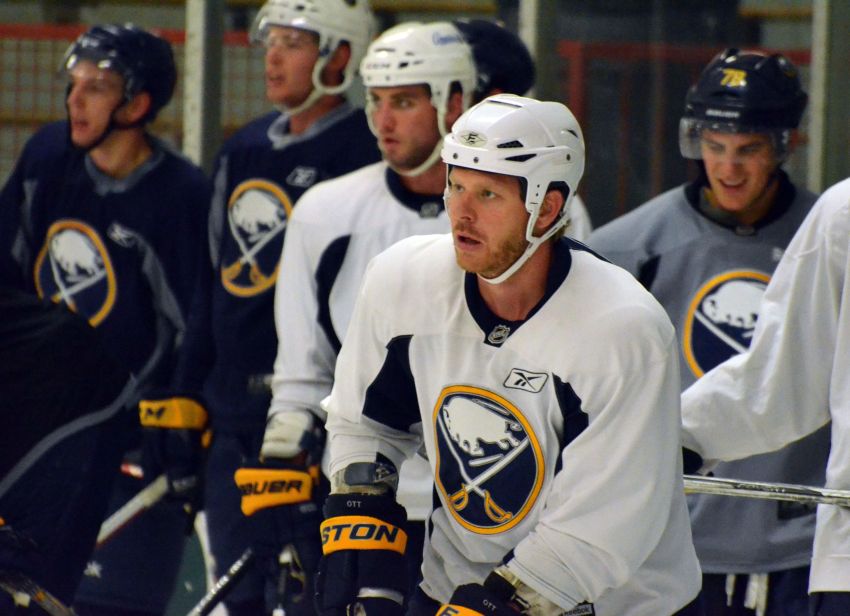 BUFFALO – Seventy days later, the NHL lockout has claimed 422 games, including 27 Sabres tilts after the league made its third round of cancellations Friday.

With no negotiating sessions scheduled and Wednesday’s new offer by the NHL Players’ Association – one the union has said is about as good as the players will make – dismissed quickly, it’s fair to wonder if the 2012-13 season will even be played.

In Steve Ott’s mind, the damage sustained each day of the work stoppage has the NHL “falling into almost a second-tier league compared to the NBA, NFL and Major League Baseball.”

“(It’s) extremely disappointing because I am such a big fan of the NHL,” the Sabres winger told the Times Herald by phone Friday. “How detrimental is this going to be to the United States for the next five years until we rebuild it up again and move on to another deal?”

Ott believes the league’s killing a game that had been making significant gains on the North American sporting landscape since the last lockout in 2004-05. This is the NHL’s third lockout since 1994-95 and fourth stoppage since 1991-92, when a players’ strike briefly halted the season.

The NHL and commissioner Gary Bettman sold the last lockout and the new collective bargaining agreement it generated as one that would fix the game.

Fans may be reaching their boiling point now, Ott said.

“If I’m a fan of hockey, I’d be completely pissed off. I’d be beyond pissed off,” Ott said. “ … When does it stop? Where does it work out? And that’s the issue that I have. If I’m a fan, I probably don’t come back for a long time, or I have a pretty sour taste in my mouth.”

To show his displeasure, Ott hasn’t shaven since the lockout began Sept. 15.

“Still got the beard,” he said. “It’s pretty solid. It’s got some serious winter growth on it now. It’s disappointing when I look in the mirror more than anything because I wish it was off and I wish we were playing.”

Not long after Ott spoke, the NHL confirmed speculation, canceling all of its games through Dec. 14 and the Jan. 26-27 NHL All-Star Weekend in Columbus, a weak market that could’ve been boosted by briefly becoming the center of the hockey universe.

What happens next? The NHLPA thinks its last offer – one executive director Don Fehr called a “major move in the owners’ direction” – made significant concessions and should be used as a negotiating tool. Perhaps most notably, players offered to take a fixed percentage of hockey-related revenue, not a guaranteed amount.

“When I heard about (the proposal), I was actually completely shocked that we had moved that far off, I guess you could say our stand,” Ott said. “(It shows) good faith in our negotiations that we truly want to have a season and we’re ready to play. And for them to completely shoot that down is disappointing to the fans, disappointing to everybody. It just doesn’t make sense.

“When does it stop and where does it end?”

It could end if the NHLPA decides to decertify, a drastic move that would dissolve the union, creating a possible court fight. In an email to the Globe and Mail’s James Mirtle on Thursday, Sabres goalie Ryan Miller said he supports decertification, something the NBA and NFL both pursued during lockouts last year.

“After watching the other sports leagues go through labor disputes last year, it is apparent that until decertification is filed, there will not be any real movement or negotiation,” Miller wrote. “Many things in our negotiation are very consistent with the NFL and NBA negotiations, and both of those leagues filed papers necessary to decertify.”

Miller also called decertification “a push back” that “should show we want a negotiation and a fair deal on at least some of our terms.”

Although Ott said he needs to “get up to speed” with how decertification works, he’d support it.

“If we have to go that stance, I’m for anything that gets us back on the ice,” Ott said. “Having an unwilling negotiating partner, you can only do so much for so long before other matters have to be taken into account.”

Ott believes 38-year-old Washington defenseman Roman Hamrlik should’ve taken into account what the game has given him before speaking out earlier this week. In a Czech-language interview translated by Yahoo! Sports, a “disgusted” Hamrlik called out Fehr.

“If half of players say let’s play, then they should sign a new CBA,” Hamrlik said. “If there is no season, he should leave and we will find someone new. Time is our enemy.”

Ott said he’s “disappointed” at the 19-year veteran “as a professional athlete.”

“Obviously, he’s upset about being locked out,” Ott said. “But for what he’s gained out of the game … it’s disappointing to see. I don’t want the kids in junior to be affected by this and not have an opportunity that I wasn’t able to have.”

To stay in shape, Ott’s been skating around the Detroit area with members of the Red Wings and the Windsor Spitfires, his old junior club. He’s leaving Sunday to spend a week working out in Phoenix.

“I almost feel like I’m a military guy in the essence of I’m fully trained and just basically being ready to be deployed,” Ott said.