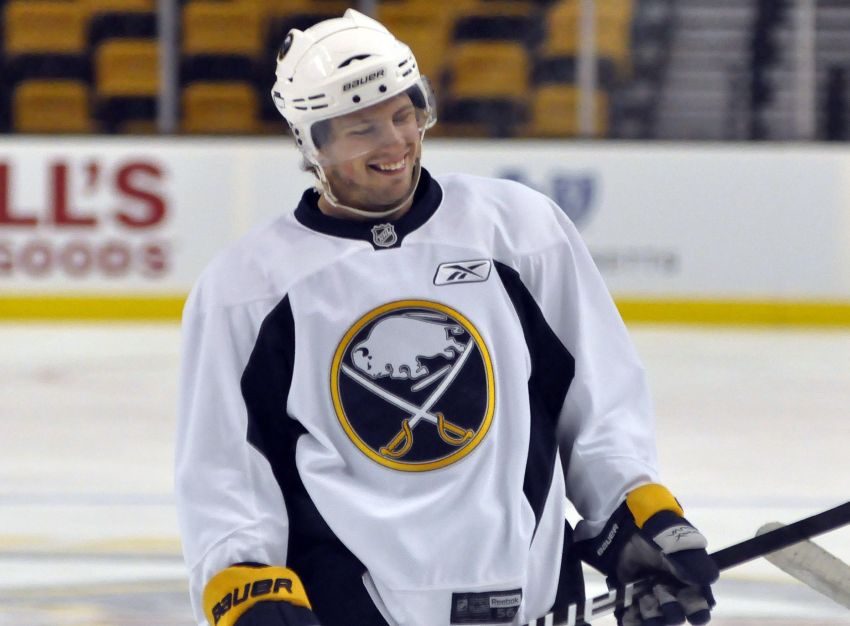 BUFFALO – Sabres sophomore Nathan Gerbe – the collegiate scoring machine, AHL star and NHL rookie that tallied at a 30-goal pace the second half of last season – has five scores this season, including just one in the last 21 games.

Right now, the diminutive Gerbe’s not a scorer; he’s quickly morphed into a strong checker, playing a tenacious left wing on a line with Paul Gaustad and Patrick Kaleta that draws the opposition’s best.

“You just keep going,” Gerbe said Tuesday prior to the Sabres’ 2-1 win over the New York Islanders inside the First Niagara Center. “You can’t pay attention to stats too much because funny things happen where you don’t get the numbers (and) rewarded. Or sometimes you get it and don’t even play well.

“The thing is you just got to come in and work hard every day. It’s mainly my focus. I don’t worry about what the stats say.”

The stats say this will likely be Gerbe’s lowest offensive output ever. With zero scores in the last eight games, he’s on a seven-goal pace. He does, however, have 17 assists, two more than he had all of last season.

Gerbe’s ferocious style lends itself well to a defensive game. He’s quick, hard on pucks and challenges anyone despite being only 5-foot-5. He might lead the Sabres in scrum battles this season. It’s common to see him barking at an opponent after a whistle with his helmet off.

“I think he’s been able to make that adjustment (by utilizing) his speed, creating back pressure, playing a 200-foot game, making sure pucks are getting deep, getting on top of people (so) they can really disrupt other teams’ top lines,” Sabres coach Lindy Ruff said. “He gets under the skin. He plays a hard game. He’s the type of kid that won’t back down from anybody and he’s coachable.”

This isn’t the worst offensive slump Gerbe’s endured, though. He didn’t score until his 21st game last season, yet finished with 16 goals in 64 contests. He’s proven he can get on a roll.

On Sunday, he nearly netted his first since Feb. 4, ringing a perfect Kaleta feed off the post with an open net ahead.

“It (stinks), that’s for sure,” Gerbe said about the miss. “You want to score those. It’s not the end of the world. You got to keep playing.”

Ruff on forward Brad Boyes, the former 43-goal scorer with three tallies in 47 games this season: “He’s frustrated. You talk to a player about some of those opportunities. I think his compete level … and putting him with (Gaustad earlier) was a good thing. We’ve gotten some good play out of him. There’s just no numbers to go with it.

“In some situations, it would’ve won us games, or at least got us a point in some situations. I think the obvious strength that has helped us has been the shootout performance.”

For a team with one playoff appearance in six seasons, the Isles unearth a lot of slick scoring forwards.

They signed Matt Moulson as an unheralded free agent in 2009 and claimed Michael Grabner on waivers last season.

In 2010, they quietly inked PA Parenteau, an AHL player with 27 games of NHL experience.

Today, Parenteau might be the most underrated playmaker in the league. He began Tuesday with 12 goals and 53 points in 59 games. His 41 assists ranked fifth overall.

“The realization in this league today is you got to participate in a team concept to win hockey games, and your skill will come out to the forefront,” said Isles assistant coach Doug Weight, who subbed Tuesday for ill coach Jack Capuano. “That’s what PA’s done for us on a regular basis. … He’s been very good for us. … He’s answered the bell.”

The three started Tuesday with 54 goals and 128 points.