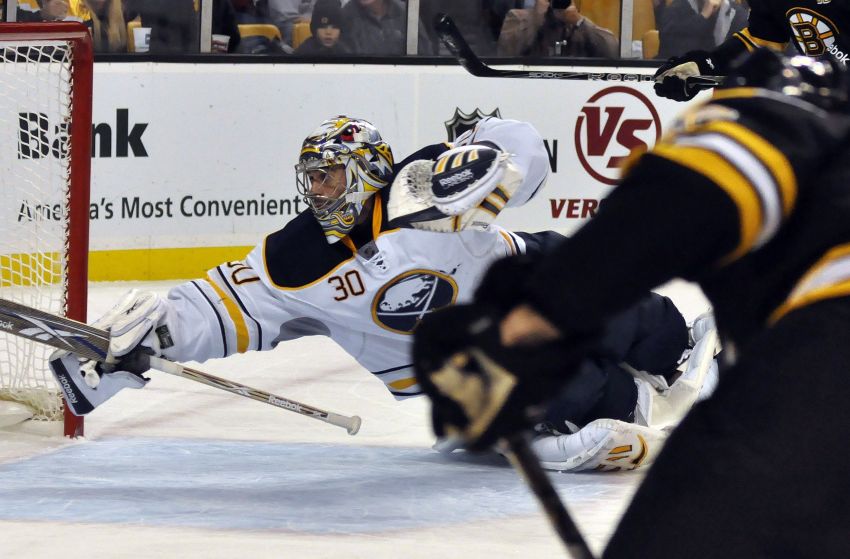 Consider the following: his goals-against average the last two seasons has ranked 22nd and 22nd; his save percentage has ranked 18th and 19th; last year, he failed to backstop his team to the postseason for the third time in five seasons.

Based on the recent past, Miller’s probably an average netminder.

Is he better than, say, St. Louis journeyman Brian Elliott, who enjoyed a career season in 2011-12, posting a league-best 1.56 goals-against average after barely making the Blues? Yes. Miller still has a better body of work than many of the goalies statistically better than him.

But it’s hard to keep arguing Miller’s an elite goalie when he’s generating below-average numbers on a non-playoff team.

Miller quickly imploded after a great start last season. By early November, his appearances inside the First Niagara Center became increasingly difficult to watch. Fans rode him hard, serenading him with Bronx cheers when opponents blitzed him early.

They wanted backup Jhonas Enroth, who couldn’t lose then, starting. At one point, the rookie’s play kept Miller on the bench two straight games, igniting a controversy.

When Milan Lucic’s wicked hit Nov. 12 in Boston concussed Miller, the 31-year-old tended the worst goal of his career following his return, going 6-9-2 with a 3.32 goals-against average and .889 save percentage during a terrible 18-game stretch.

If Miller had been even average during that stretch, the Sabres likely would’ve won a few more games and made the playoffs.

Clearly, when Miller’s on, he’s one of the true greats. It’s just that for the past two seasons he’s been on for only the final few months.

He said in April an “enough is enough” attitude helped turn his season around. It’s an attitude he should start embracing again in September.

Here’s a full look at the team’s goalies heading into the summer.

Don’t forget, Miller still has Enroth pushing him. While the Swede cooled considerably last season, he’s still a strong prospect and perhaps a future No. 1.

Should Miller falter again early, the trade speculation and calls for more Enroth appearances will surely heat up. Miller may have more to prove than any other Sabre early next season.

Enroth had won nine straight decisions at one point early last season, including his first six of 2011-12.

Incredibly, he hasn’t won a game since Nov. 26. He became an afterthought as Miller dazzled, starting only six of the final 42 contests.

Still, Enroth’s upside is strong. In his first full NHL campaign, he stole some time from Miller.

Regular work, something the Sabres appeared committed to early, would definitely help Enroth, who had never sat so much. Watching for weeks again next season will stunt his growth.