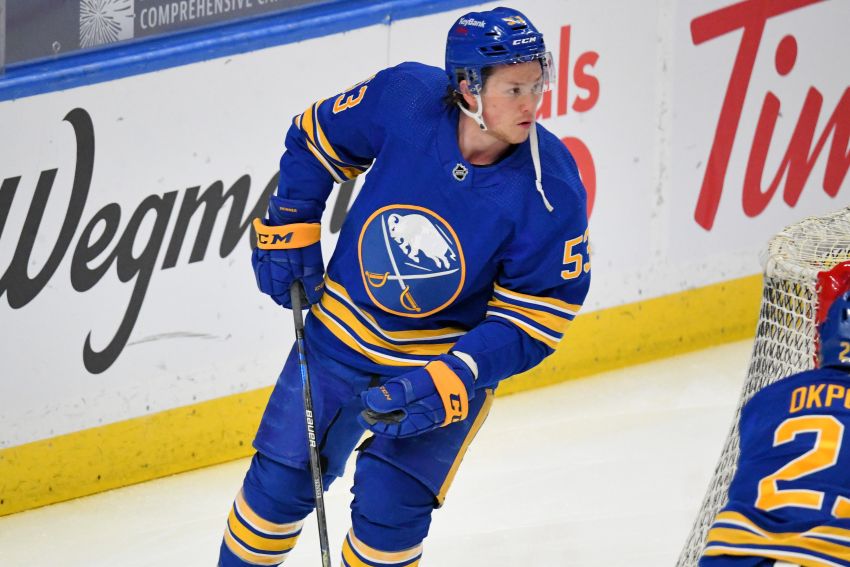 BUFFALO – Opponents detest Jeff Skinner, one of the NHL’s foremost pests. The Sabres winger has a knack for getting under their skin, whether it be by running his mouth, relentlessly hounding the puck or scoring goals.

“He’s one of my best friends and I’m pretty sure I would hate his guts on the other side,” Sabres winger Casey Mittelstadt said after Skinner agitated the New York Islanders and scored late in Saturday afternoon’s 5-3 win. “We’re lucky to have him.”

Skinner, 29, annoyed the Islanders all day. Zdeno Chara exchanged words with him early. By the end, after Skinner’s 33rd goal restored the Sabres’ two-goal lead and sealed their fourth straight victory, the Islanders went right after him.

Adam Pelech cross-checked Skinner before Matt Martin jumped him after things quieted down for a few seconds, igniting a melee. Center Tage Thompson quickly came to his defense, and soon all 10 skaters, including rookie defenseman Owen Power, were involved.

Skinner, Pelech and the Islanders’ Johnston all earned 10-minute misconducts 14:40 into the third period, ending their afternoons.

“There was a lot of emotion,” said Skinner, who scored 12:40 into the third period. “Obviously, they weren’t happy. Yeah, it’s an emotional game and I thought we did a good job sticking together there.”

Sabres coach Don Granato often talks about not giving away emotional energy, and he loved how Skinner maintained his focus and poise.

“What I mean by that is make sure you’re ready to score the goal, make sure you’re ready to execute the play, and don’t put all your attention and emotional energy toward redemption of revenge against another opponent. Let’s stick (to) the task,” Granato said. “And Skinner’s goal there pretty much sealed the game, and … he never lost sight of his responsibility to his teammates, to the system we play. He was ready to score a goal.”

That goal – Skinner converted a rebound after Thompson drove to the net – helped the Sabres continue their hottest streak in years.

Incredibly, they’ve won fourth straight contests for the first time since their 10-game winning streak in November 2018. They’re 15-8-3 since March 1.

Like in so many recently games, the Sabres responded to some late adversity. After Noah Dobson scored at 8:46 and Kieffer Bellows followed at 10:22, Skinner tallied just 2 minutes, 18 seconds later.

“I love the third period, just loved it,” Granato said.

Granato said when the Islanders crept within one goal, the chatter on the bench briefly became nervous.

“I’m thinking of calling a timeout to calm it down, and then I even stopped my own thought,” he said.

Granato wanted to “allow ourselves to dig ourselves out of this” and see how the Sabres would respond.

The physical response also impressed Granato. Clearly, the Sabres enjoy playing for each other.

The Sabres have quietly been one of the NHL’s highest-scoring teams over the past two months, and another five goals pushed their season total up to 226, their highest output since they scored 240 times in 2010-11.

They’ve scored five or more goals in three consecutive games for the first time since March 14 to 19, 2008.

Thompson has scored 23 goals since Feb. 1, the NHL’s fourth-highest number.