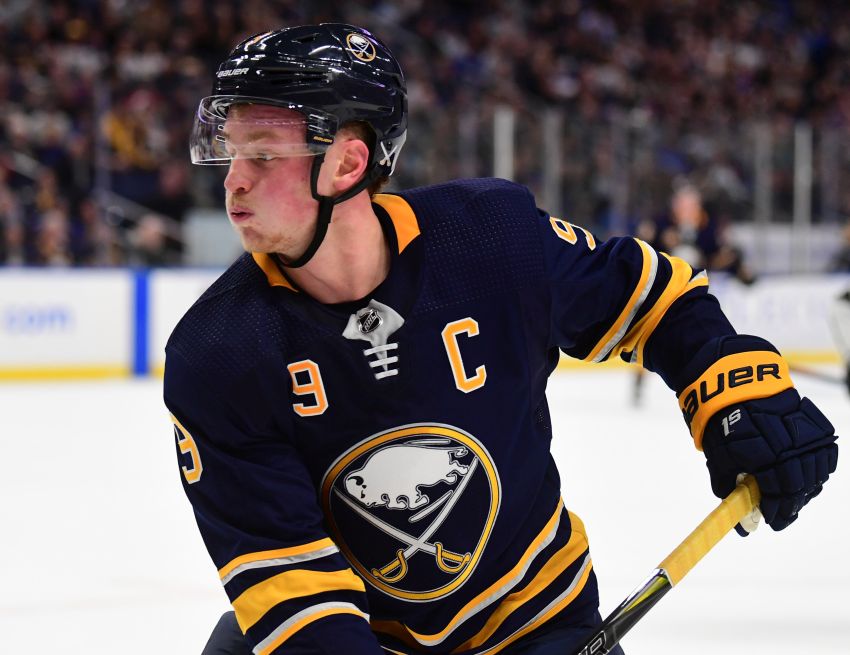 BUFFALO – Before Sabres captain Jack Eichel left the NHL All-Star Game in San Jose, he snagged some special memorabilia for his house.

In addition to having his game jersey signed by the entire Eastern Conference squad and a stick autographed by everyone in the game, the high-scoring center received an item he has coveted.

“I grabbed one of (Sidney) Crosby’s sticks,” Eichel said this afternoon inside KeyBank Center. “That was cool. I had been waiting on one of those for a little bit.”

Eichel and winger Jeff Skinner, the Sabres’ other participant in Saturday’s game, returned to practice today inside HarborCenter.

Incredibly, toward the end of the session, Skinner appeared to lose an edge and slid into Eichel’s legs, taking him out.

Both players got up and kept going. Still, it could’ve been much worse.

Based on the defense combos, Matt Hunwick, a healthy scratch the last 13 games, could return Tuesday in Columbus, the Sabres’ first game after their bye week and the NHL All-Star break. Hunwick skated beside Marco Scandella.

“It’s just good to be back together as a group, as a team,” Housley said.

Hunwick, 33, last played Dec. 18, his second appearance after a neck injury sidelined him for months.

Nathan Beaulieu and rookie Lawrence Pilut could be the odd defensemen out.

Meanwhile, as the Sabres sat idle during their bye, some of the opponents they’re chasing in the standings kept playing and gaining ground.

The Sabres trail the Canadiens, who have their bye this week, by seven points but have three games in hand.

The Sabres are four points out of the Eastern Conference’s last wild card spot.

“It’s a good thing for us, a challenge for us,” Housley said. “This is where we wanted to be. Obviously, we want to be in a playoff spot, but we put ourselves in a good position. … I’m excited to see how our guys are going to react to that challenge.”