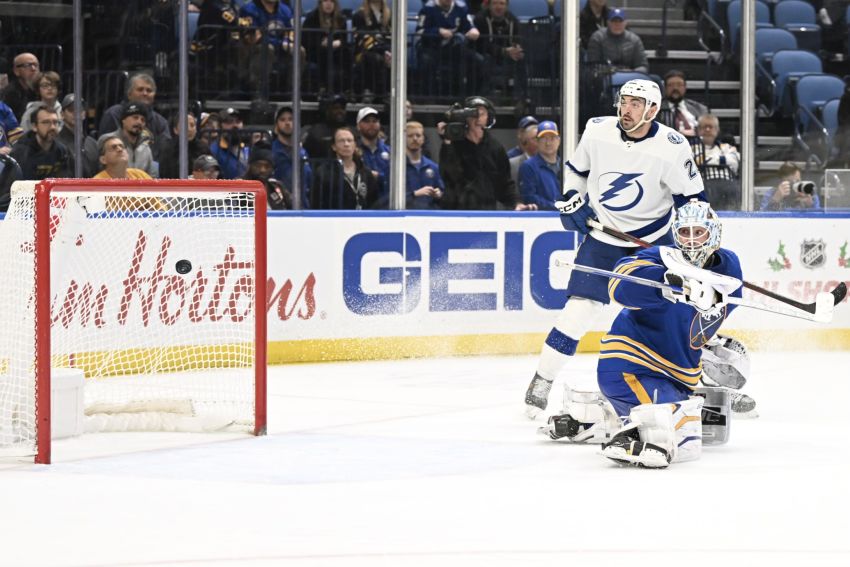 BUFFALO – With less than six minutes left in Monday’s 6-5 overtime loss, winger Jeff Skinner grabbed the puck near the goal line and beat goalie Brian Elliott short side, giving the Sabres what felt like a commanding two-goal lead.

After falling behind 2-0 early to the Tampa Bay Lightning, the Sabres roared back, tying the game before the first period ended and grabbing a second-period lead. When Brayden Point’s second-power play-goal knotted the game later in the period, the Sabres did not flinch.

At the 9:37 mark of the third period, center Dylan Cozens scored from the right circle, giving the Sabres a 4-3 lead before the crowd of 11,766 fans at KeyBank Center. Skinner’s goal felt like the icing on what would be a significant win over an Atlantic Division rival.

Then the Sabres lowered their guard. They gave the stacked Lightning, which has reached three consecutive Stanley Cup finals, extra time and space.

It cost them the game.

Stamkos won it 2:44 into the extra session, picking the far corner from the right circle and beating Sabres goalie Ukko-Pekka Luukkonen.

“So we tightened up and that is a very, very big learner. We had hesitation in our game and it was only the last 10 minutes.”

Goals from center Tage Thompson and winger Jack Quinn tied the game after the Lightning scored on two of its first four shots.

“We fall behind and we’re playing pretty well,” Granato said. “We come back and … our guys collectively felt that we shouldn’t be behind. They fight to get back. They tie it, I think, and then we pull ahead and then you sort of take ownership of the game like, ‘We got it.’ And that psyche changes and we didn’t keep going, keep driving. We rode the ups and downs in the game and it was almost as if we’re hopeful the clock will just run out. We stop playing.

“So that is very uncharacteristic but I think it had to do with the way the game was laid out. We had created so much that you felt you should win and it should be your game, and now you’re protecting that once you got the lead. And you can’t. You’ve got to keep going at it the way you were, and we didn’t.”

For Granato, the positives – “You score five goals, you create lots of chances,” he said – can’t overshadow the rough ending.

“You leave this game, that’s going to dominate everything else,” he said. “And … it was every single guy. It was all the way to the overtime goal. I do say all this and our guys will learn from it. I know they will. I know they’re (tick) off at it and they’ve got to own it, they will. I know we will.”

Sabres defenseman Ilya Lyubushkin had to be helped off the ice after blocking Stamkos’ shot late. Granato did not have an update on the Russian.

The Sabres earned one point for reaching overtime, their 19th this season. Still, they’re seventh in the division, just two points out of the basement.