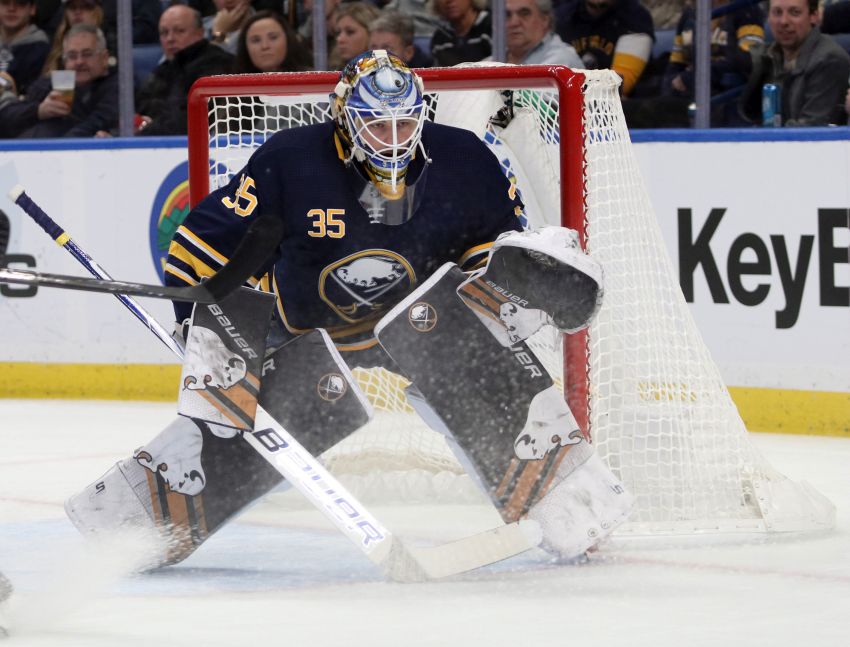 Sure, they made progress in Tuesday’s 2-0 loss, pumping 35 shots on goal and attempting 61 overall. Five-on-five, they probably outplayed the Dallas Stars.

Of course, any effort would’ve looked better than their last one, Saturday afternoon’s miserable 3-0 loss in Colorado. In a downright terrible offensive display, the Sabres produced only nine shots in the opening 50 minutes against the Avalanche.

So, yes, a team can showcase improvements while getting shut out again.

The Sabres haven’t scored since winger Kyle Okposo’s goal 7:20 into the third period in Thursday’s 5-4 shootout loss to the Chicago Blackhawks, a stretch of 137:40.

“I know it sounds like a broken record, but coming back from Colorado, I did like the response from our players,” coach Phil Housley said following the Sabres’ fifth straight loss.

Sabres winger Tage Thompson said: “That’s the response we needed. I think we need to build off of that.”

While the Sabres fell out of a playoff spot a long time ago, they stayed in the chase as the winter progressed. At least they had improved enough to play meaningful late-season games, right?

Well, the Sabres are 2-9-2 in their last 13 contests. In their most critical stretch of games in seven years, they’ve completely fallen apart.

Tuesday’s game before the crowd of 17,830 inside KeyBank Center looked like trouble from the beginning.

Stars goalie Ben Bishop has dominated the Sabres throughout his career. His third straight shutout – he has also blanked Colorado and the New York Rangers this month – improved him to 12-0-1 in 13 career appearances against Buffalo.

Bishop joined Ed Belfour and Cesare Maniago as the only Stars goalies to record three consecutive shutouts. Bishop also beat the Sabres 1-0 on Jan. 30 in Dallas.

“It’s got to be frustrating,” Housley said of the Sabres’ scoring woes. “We could’ve gotten to the net a little bit more to try for a second or third opportunity. But we had guys around the net, we never found the rebound.

“Not to make an excuse, we ran into a goaltender that’s been playing terrific hockey right now. … We got to find a way to make it difficult for the goaltenders.”

Still, the Sabres, who played without suspended captain Jack Eichel, had chances to beat Bishop.

“I can’t fault the way we worked, the effort,” Housley said. “We were heavy in the battle. It’s unfortunate because this is the result. …

“But at the same time, we had our opportunities. We score that goal to start the second, it changes the complexion of the game, it gives our team a boost.”

“Just got to stick with it and they’ll start going in,” Skinner said.

The Sabres had some bright spots Tuesday.

Thompson, fresh off getting scratched, recorded four shots and had about three or four quality scoring chances, including a breakaway.

“I really liked his game tonight,” Housley said. “He brought an element of speed to the game, he had some really good looks. He’s got to continue to do that. Even in the battle, I thought he delivered some hits. He was physical out there tonight.”

“I got more and more comfortable each period,” Nylander said.

Stars winger Roope Hintz scored both goals, roofing a shot by goalie Linus Ullmark 7:29 into the second period before beating him from the point on the power play at 13:12.

Housley had no update on defenseman Zach Bogosian, who left the game with an undisclosed injury after the second period.