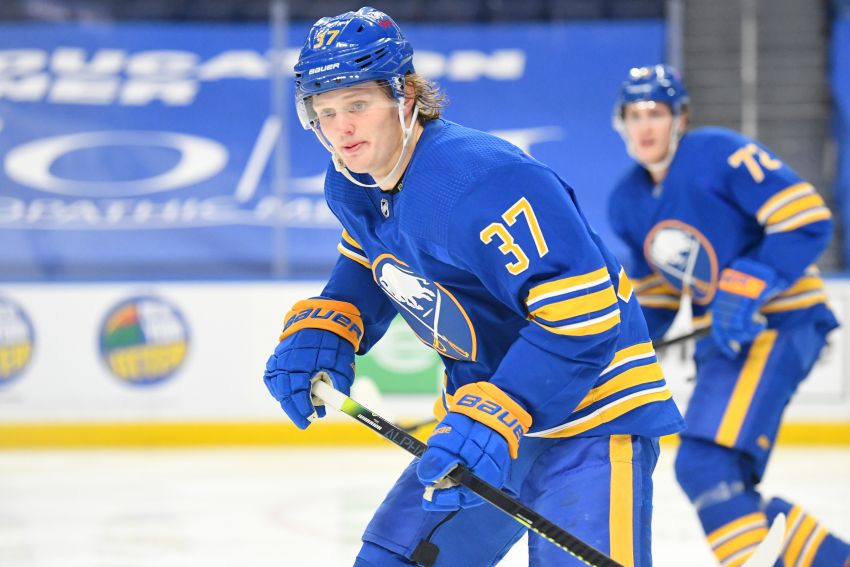 BUFFALO – In barely a week, the Sabres have transformed from the NHL’s laughingstock into a team that plays a fast, active brand of hockey.

Right now, they’re creating offense, limiting chances against and – believe it or not – are pretty exciting to watch. They look nothing like the hapless team that just endured an embarrassing 18-game winless streak.

Interim coach Don Granato has the Sabres playing to their strengths and feeling confident. After Saturday’s come-from-behind, 3-2 shootout win over the New York Rangers, they’re on a four-game point streak (2-0-2).

“The last few games it’s all come together and we’re playing a lot better,” center Casey Mittelstadt said on a Zoom call. “You can feel it on the bench, just the belief and the battle out of everyone.”

For the second straight game, the Sabres scored late to force overtime inside KeyBank Center. Winger Victor Olofsson tied it with 3:41 left in regulation, one-timing linemate Kyle Okposo’s pass high in the slot.

Then winger Tage Thompson, who tied Thursday’s game with 3.6 seconds left, scored the shootout’s only goal.

Goalie Linus Ullmark’s shootout stop on Kaapo Kakko secured only the Sabres’ eighth win this season. Ullmark’s .868 career shootout save percentage ranks first all-time among goalies who have participated in at least 10 shootouts.

On Saturday, after Artemi Panarin scored twice in regulation, Ullmark stoned him in the shootout, holding still as the Rangers superstar tried to bait him into moving.

Ullmark’s presence, of course, has helped revitalize the Sabres. They received wonky goaltending during his long absence recovering from a lower-body injury.

His presence surely instills confidence in his teammates. But the Sabres have quickly developed a belief they can win because they’re playing the right way.

When the Sabres trailed 2-1 after two periods, Granato said he “wasn’t concerned about our guys’ psychologically at all.”

The Sabres have been finally started blocking out adversity and focusing on their next challenge.

“They were immersed in the moment,” Granato said. “They weren’t riding the emotions that you could ride with what transpired through two periods. They really knew they were playing well and they knew they could elevate.

“So all I mentioned to them was, ‘You’ve got another level, you know it, and let’s find it and let’s enjoy it. Let’s embrace this. This is fun.’”

The Sabres might finally be having some fun for the first time this season.

How have they started creating offense and playing defense?

“It’s a mix of a couple things,” said Mittelstadt, whose first-period goal tied the game at 1. “We’re a little bit more patient coming out of our zone and coming up the ice. We’re willing to come back and regroup and just find the open man. Our D have done a great job jumping up on the weak side. That always opens things up for the forwards. I think a mix of that and we’re just going back hard through the middle.

“I think if you make a mistake, put your head down, take three hard strides back and you should be right back in it. Just cover the middle of the ice, keep shots to the outside, keep it consistent for the goalies has made a big difference.”

Mittelstadt said the Sabres are “a fast team, especially when we get the puck moving north.”

“We’ve just done such a good job making little plays, leaving the puck for the next in a better place,” he said. “Simple things that changed. Obviously, there’s things we can build on and still get better at, so I think that’s the exciting part of it.”