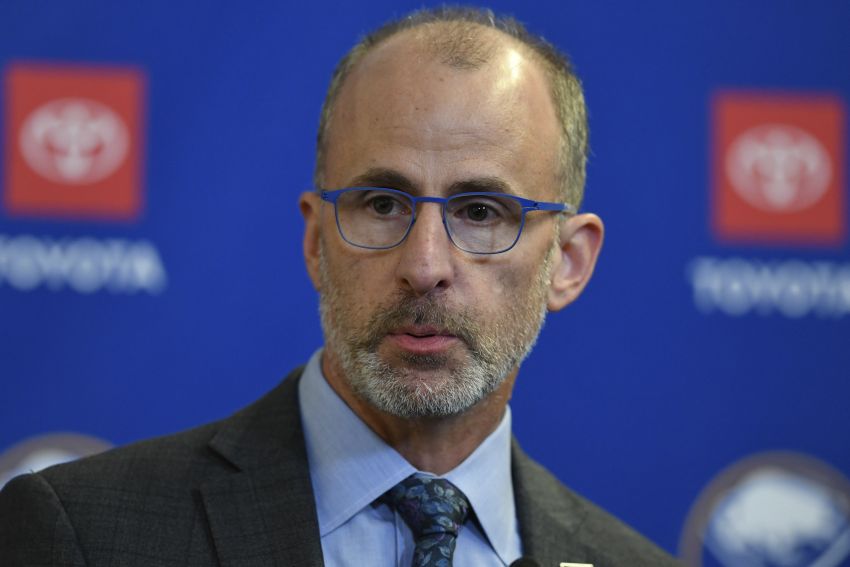 Don Granato is in his first season as Buffalo’s permanent coach. ©2021, Micheline Veluvolu

On Sunday, following a six-day pause, the Buffalo Sabres planned to reconvene and practice. Still, given how COVID-19 has been decimating NHL teams, it felt like their return to the ice could be delayed.

Sure enough, barely two hours before their scheduled 3 p.m. session, the Sabres canceled it. About 90 minutes later, they announced coach Don Granato and forwards Dylan Cozens and Mark Jankowski have entered the league’s COVID-19 protocol.

Right now, all three are asymptomatic, according to the team.

The Sabres now have one coach and five players in protocol. Wingers Zemgus Girgensons, Vinnie Hinostroza and Jeff Skinner were added last week.

Sunday was the first day teams could gather for testing, practice and travel since the NHL paused last Wednesday.

Tonight’s game against the New York Islanders at KeyBank Center was postponed Friday when the NHL pushed back its resumption of play one day to Tuesday. The NHL earlier had postponed all three Sabres games scheduled for last week.

Their next scheduled game is Wednesday at home against the New Jersey Devils.

The Sabres announced Sunday night they plan to practice at 11 this morning. It’s unclear who will run the session. They haven’t skated as a team since last Sunday and last played Dec. 17.

When Granato, 54, was an assistant last season, the Sabres took extra precautions because he has experienced health problems in the past. He briefly fulfilled his coaching duties from a suite during games and from the stands for practices after the team’s COVID-19 pause ended.

He did not, however, have the virus then.

Granato took a leave of absence from the Sabres for the first six weeks of 2019-20 after being hospitalized with severe pneumonia. He also battled cancer earlier in his career.

Meanwhile, Cozens, 20, also tested positive for COVID last season, when the Sabres had as many as nine players in protocol.

General manager Kevyn Adams has said all of the players and staff with the Sabres and Rochester Americans, their AHL affiliate, are vaccinated.

How badly is COVID ravaging the NHL? Around 130 players were in protocol as of early Sunday night, according to CapFriendly.com.

To help teams field lineups and play games, the NHL has reinstituted the taxi squad, according to The Associated Press and Sportsnet. Teams utilized a taxi squad during a truncated schedule last season to combat roster problems created by COVID.

As many as six players can be recalled from the AHL and put on it. It’ll be in place until at least early February.

In other news, the AHL on Sunday postponed tonight’s Amerks home game due to league protocols affecting the Utica Comets.