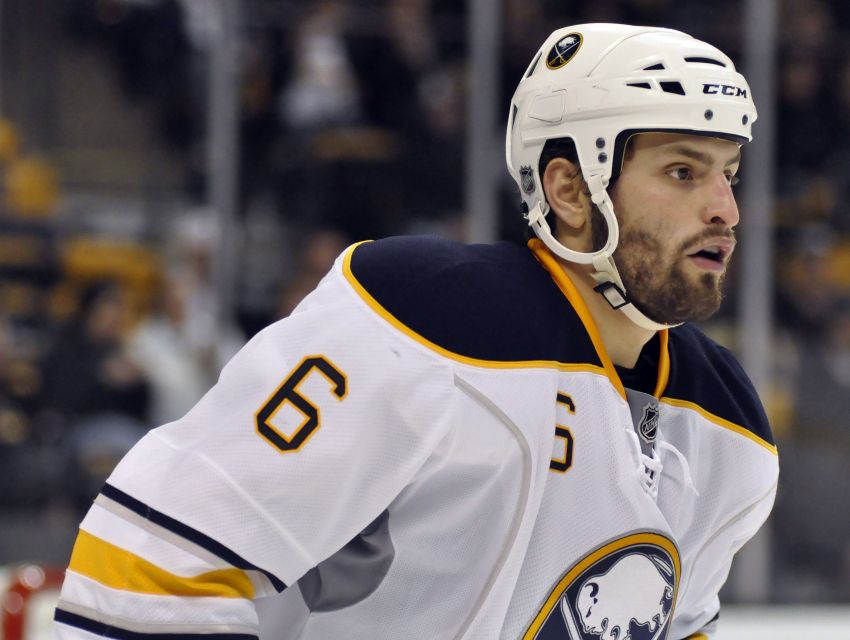 BUFFALO – The plan’s to get Mike Weber some ice again soon, Sabres coach Lindy Ruff said. With seven healthy defensemen, someone had to sit Wednesday, so Weber, a team-worst minus-19, watched the 3-0 win over Montreal after playing 44 straight games.

Ruff could utilize all seven tonight in New York against the Rangers and drop a forward. He could also scratch Weber and skate him Saturday at home versus the Minnesota Wild.

Despite the awful rating, Ruff said Weber’s “played rock solid” and “been a physical force” recently.

Whatever Ruff does with his defense, don’t expect him to bench impressive newcomer Alexander Sulzer, a throw-in to the Cody Hodgson trade with Vancouver.

“I think that his game has been that good,” said Ruff, whose ninth-place Sabres could pass Washington tonight and move into the final Eastern Conference playoff spot for the first time since Dec. 20. “It’s tough to take him out.”

The steady German, a spare part with the Canucks all season and briefly following his Feb. 27 arrival, has possibly secured a regular NHL spot for the first time.

Sulzer, who appeared only 12 times this season prior to joining the Sabres, has played eight straight games beside countryman Christian Ehrhoff, averaging 18:41 of ice a night.

“I definitely haven’t had that much fun playing hockey in a long time,” said Sulzer – who has one goal, three points and plus-2 rating – Thursday inside the First Niagara Center. “I’m really excited about the opportunity.”

Ruff and others have admitted they knew little about Sulzer, who was swapped for Marc-Andre Gragnani, the Sabres’ extra defenseman much of the winter.

Sulzer appeared sparingly over parts of three years in Nashville, and then was dealt at the trade deadline last season to Florida, where he played nine games.

It was expected the 27-year-old, an unrestricted free agent following the season, would have a similar run in Buffalo. Perhaps he would occasionally fill in before quietly departing.

“Knowing as little as we did about him, the opportunity for him to get in and kind of showcase himself, he’s earned his spot,” Ruff said. “He’s earned his ice time.”

How has someone with only 83 games of NHL experience jelled so quickly and played big minutes at crunch time?

“He’s played for his country in some big situations, which tells you he’s got some game.”

Sulzer credits much of his success to playing beside Ehrhoff, the top-tier defender he roomed with at the 2010 Vancouver Olympics.

With his slick skating and booming shot, Ehrhoff’s the flash. Sulzer’s just a simple, stay-at-home defender.

“I have a really good partner with Christian,” he said. “He’s a great player and he makes things easier out there for me to adjust and the coaches gave me trust with pretty good ice time, too. You get more ice time, you get more comfortable and you can adjust quickly.”

Sabres defenseman Jordan Leopold joked, “You got Team Germany on the blue line there.”

“These guys know each other from the past, have a little bit of familiarity with each other being in the situation they have been,” he said. “ … They seem to be a good fit for each other. Nobody would really expect it.”

Sulzer’s already so comfortable with the Sabres and the city he believes “this is going to be a big home for me.”

Does that mean he’d like to re-sign with the Sabres?

“I haven’t even talked to anybody about that,” Sulzer said. “I like it here, and I would obviously like to stay here and play here as much as I can.”

Of course, having seven healthy defensemen is a good problem. Five regulars have endured injuries this season, and playing rookies in their place nearly extinguished the Sabres’ playoff hopes.

They’re 16-5-5 since the defense returned to full strength Jan 24. It can be argued goalie Ryan Miller is the NHL’s MVP over that stretch.

“You put NHL defensemen back in the lineup and your play improves,” Ruff said. “I think a big part of it is Ryan’s game. He’s been on top of his game, which lends to not worrying as much about some of the mistakes you make within a game.

“I pointed out when we got our defensemen back, they’re tougher players to play against. They’re good players.”

Notes: Ruff on the Sabres’ climb into ninth place and their brief points tie with Washington: “We haven’t got anything right now. We’re going to have to win some games that some people expect … is going to be too tough a task for.” The Capitals’ 2-1 shootout loss Thursday in Philadelphia moved them one point ahead (91-90). … Winger Nathan Gerbe (muscle pull) is progressing and feeling better but didn’t make the trip, Ruff said. … Ruff on if the Rangers, who brawled three seconds into a 4-2 win over New Jersey on Monday, will start three enforcers again tonight: “I’m not getting involved in that. Torts might give me a shot.” “Torts” is John Tortorella, the fiery Rangers coach.