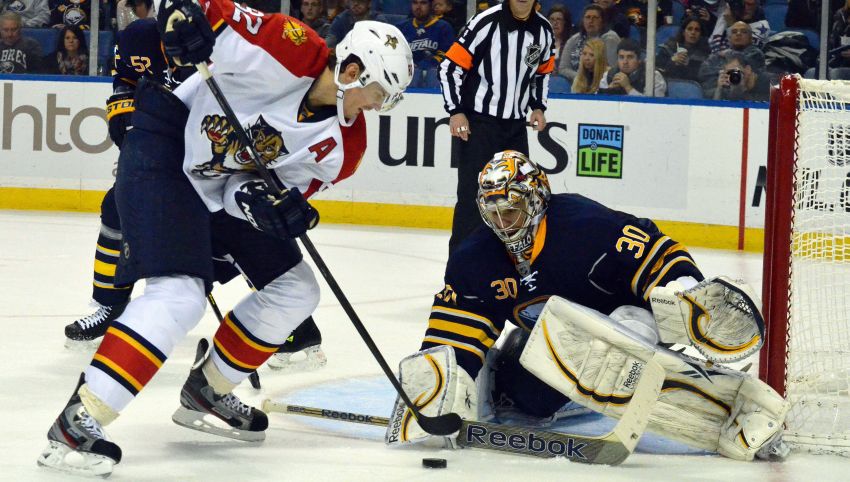 But arguably the greatest individual start in the franchise’s 42-year history is being wasted.

The Sabres have dropped six of seven games (1-5-1) after blowing a 3-1 second-period lead and falling to the hapless Florida Panthers 4-3 on Sunday afternoon before 18,831 fans inside the First Niagara Center.

The Sabres possess no scoring beyond the trio of Vanek, Cody Hodgson and Jason Pominville. They can’t hold leads or play tight defensively for an entire 60 minutes, either.

The Panthers tied it before the second period ended. Then former Sabres standout Brian Campbell scored the power-play winner 9:27 into the third period.

They had the Panthers on the ropes up two goals, narrowly missing a string of point-blank opportunities, including a breakaway from Tyler Ennis.

The Sabres have only scored eight goals without Vanek’s help.

“It’s got to go because I don’t think Thomas can keep up this pace,” Sabres coach Lindy Ruff said about the lack of secondary scoring and Vanek’s 47-goal, 112-point pace. “That line has really played well. They got great chemistry, played well, made great plays. But we do need other people to get on the scoreboard.”

Just four days ago, the Sabres’ 7-4 shellacking of the Bruins in Boston reverberated around the NHL. Now, after losing 6-1 on Saturday in Montreal and Sunday’s debacle, they’re officially a mess again.

What remained of the Super Bowl Sunday crowd booed the Sabres off the ice.

The Sabres have seven points to show for Vanek’s dynamic eight-game performance.

“I think he’d much rather have a better start to the season by us being higher in the standings than individual stats,” Pominville said about Vanek.

Vanek added: “It adds up to a losing record. So obviously I got to do more, too.”

But how much more can he really do?

Vanek scored 2:46 into the game, converting a nifty backhand feed from Pominville in front.

After Shawn Matthias tied it at 8:46, Vanek went back to work.

He created Hodgson’s goal at 13:41, undressing Campbell in the left circle before dishing to his center in front. Vanek set up Alexander Sulzer’s one-timer from the right point 3:49 into the second period.

Still, the Sabres frittered away the lead. They’ve allowed an NHL-high 17 second-period goals.

The Sabres simply got too loose and sloppy.

“It’s pretty obvious we didn’t take into consideration any of the lessons we learned last year,” Miller said “It’s pretty plain and simple.”

Ennis added: “We had chances to put away. We were outplaying them at the midway point. Maybe we just got a little overconfident and just thought it was going to continue to happen, maybe forgot what was making it happen for us, and that was just skating hard, getting it in and making plays.

“A couple turnovers and it’s in the back of the net.”

The gassed Sabres mustered little during the third period. They finally pumped the first of their four shots on Panthers goalie Jose Theodore about 12 minutes in.

Campbell, one of Buffalo’s most popular athletes before departing in 2008, savored his goal.

“I love coming back here and I still have a lot of friends here,” Campbell said. “To score the game-winning goal is great in this building. (I had) a lot of good times here, a lot of good memories.”

The Sabres don’t have much time to rest. Their schedule isn’t letting up. They play Tuesday, Thursday, Saturday and next Sunday.

“You’ve got to rest, regroup,” Ruff said. “I thought our energy compared to (Saturday) was great for the first 40 minutes.”