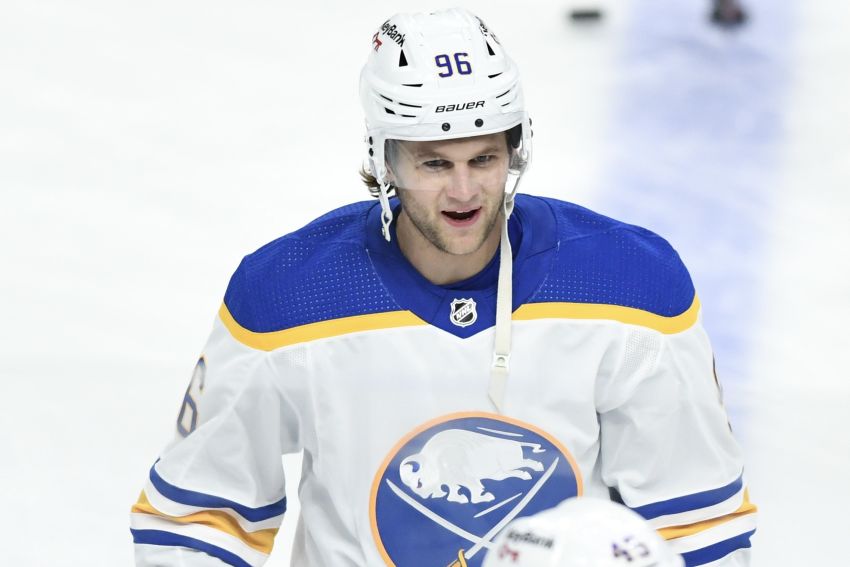 Anders Bjork is one of six Buffalo players in protocol. ©2022, Micheline Veluvolu

BUFFALO – Coach Don Granato said dealing with COVID-19 and the chaos it creates has become “almost a new normal.” For two weeks, the virus has been ravaging the Sabres, forcing players and staff members into the NHL’s protocol and five games to be postponed.

On Tuesday, three more players – forward Anders Bjork, Peyton Krebs and Alex Tuch – went into protocol. Granato said the Sabres also held defenseman Henri Jokiharju out of practice for further testing because they did not have a definitive answer on his status.

Granato and the five players who went into protocol around Christmas have all left. Two video coaches and another staff member have also departed protocol.

“It’s crazy and scary all in one because this is the craziness that we’re dealing with, the roster every day, it’s inside our bubble,” Granato said following Tuesday’s practice inside KeyBank Center. “And then you think about there’s people getting sick all over here and everywhere else. That’s scary, you’re hoping everybody’s OK and pushing through. So, yeah, it’s a little bit crazy, a little bit scary. We just have to operate our best like everyone else within the chaos.”

The Sabres, of course, dealt with COVID last season, enduring a two-week pause as the virus ran through the team. But this year, the Omicron variant has elevated the problems.

“It’s a new level,” Granato said. “It wasn’t like this last year. You didn’t have this many days where you’re waiting and trying to practice plan and losing guys an hour before, 45 minutes before, a half an hour before, and you’ve got to readjust to what you’re doing immediately in practice or a game or on a power play, things like that.”

Naturally, Granato, whose Sabres play again Thursday against the San Jose Sharks, considered canceling Tuesday’s practice. But he has gathered from his players, coaches and staff that everyone wants to plow through and keep going.

“I asked them to talk and tell me what they think, what they feel,” Granato said. “We had a meeting this morning and I asked for communication back as they needed, either myself or any coaches. I felt our guys were comfortable where they were, but again, I think everybody is sitting back and waiting. This can force you to paralysis and I think we’ve got a room there that just won’t adhere to that. They don’t want to be paralyzed. They want to go. They want to keep moving forward. I do feel as much chaos is going on around us, they’re still very focused on moving forward.”

The Sabres must recall some players from the Rochester Americans before Thursday’s game. These days, however, even summoning replacements can be difficult.

“That’s the tricky thing,” Granato said of recalling players. “You kick that around, you say you get guys up, but what if there’s stuff going through everywhere? So every time you think of bringing somebody in, you’re thinking, OK, what is somebody bringing in that you bring in? And that’s just where we’re at around the league and sports. So you’re trying to gauge and balance that as needed. …

“We have a lot of information to digest from today going into tomorrow to get to Thursday, and I don’t have many answers for you yet because of how dynamic this thing is and could still be before Thursday.”

Notes: Amerks coach Seth Appert said Tuesday in Rochester there’s “a good chance” Sabres prospect Jack Quinn, who recently contracted mono, will return to the lineup Wednesday against the Syracuse Crunch. Quinn, 20, had his first full practice Tuesday. He hasn’t played since Nov. 27 … Appert said West Seneca’s Sean Malone, who has been in the AHL’s COVID-19 protocol, has returned to the Amerks and started the “reentry process.” … Sabres defenseman Colin Miller, out with an undisclosed injury the last three games, returned to practice Tuesday. Granato said he would know more later on Miller’s status for Thursday’s game.