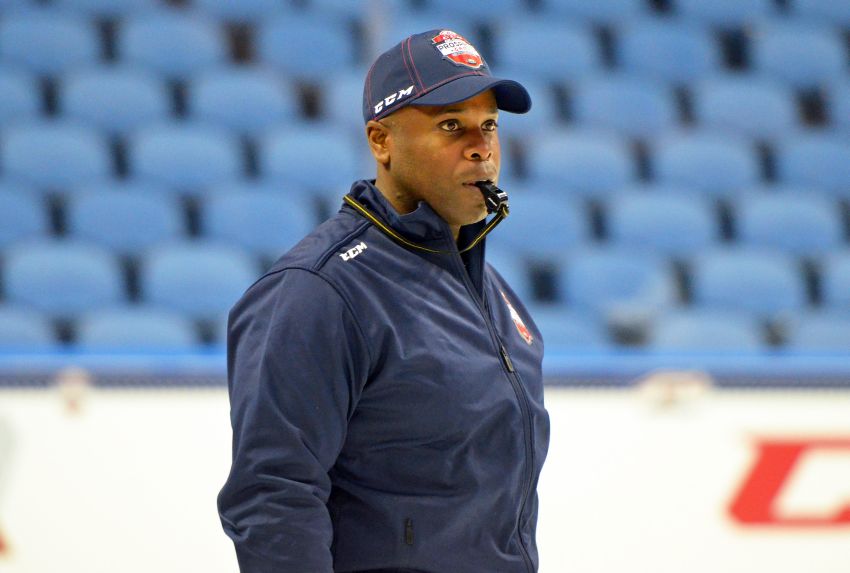 BUFFALO – Retirement has been good for Mike Grier. Since leaving the NHL, the popular former Sabres winger has enjoyed the family life he couldn’t experience during his playing days.

But after almost three years of helping out his wife, “I think now she’s ready for me to get out of the house,” Grier joked this morning inside the First Niagara Center.

Grier’s beginning to get more involved in hockey again. He’s about to begin a job as a Chicago Blackhawks pro scout. USA Hockey recently asked him to coach a team at tonight’s All-American Prospects Game.

“I was thrilled when they asked me,” Grier said. “Being in Buffalo is kind of the cherry on top. It’s a special place for me, a lot of great memories here.”

Grier spent parts of five seasons in Buffalo. He retired following his second stint in 2011, just as the excitement over Terry Pegula’s ownership was reaching its peak.

These days, the Sabres are rebuilding. Only a few players from Grier’s tenure are left.

“I think it’s been a rough couple years from kind of the euphoria of Mr. Pegula taking over and kind of the free-agent spending and that year kind of not working out,” Grier said. “I think they’ve taken the right path. I don’t think there’s kind of any point of being in the middle in eighth or ninth place. I think they kind of tore it down, starting over, getting younger.”

Grier will be coaching one of those young prospects, slick center Jack Eichel, the Sabres want to select next year. Eichel’s a freshman at Boston University, Grier’s old school.

The 39-year-old has spent a lot of time around Eichel, who he called “a real humble, down-to-earth kid.”

“He’s got a lot of things thrown on his plate early and handled everything with ease,” Grier said. “It would be pretty easy for him to have a big head, but he doesn’t. So I think that’s the most impressive thing about him.

“But he’s got a very unique skill set. He’s got long reach, great hands, sees the ice very well. But at the same time, he can snap the puck and score goals. As you guys will see tonight, he’s got one of the most unique strides you’ll see. He’ll get through the neutral zone in a heartbeat. When he opens it up and goes, it looks like it’s effortless, but he’s flying. So he’s an impressive player.”