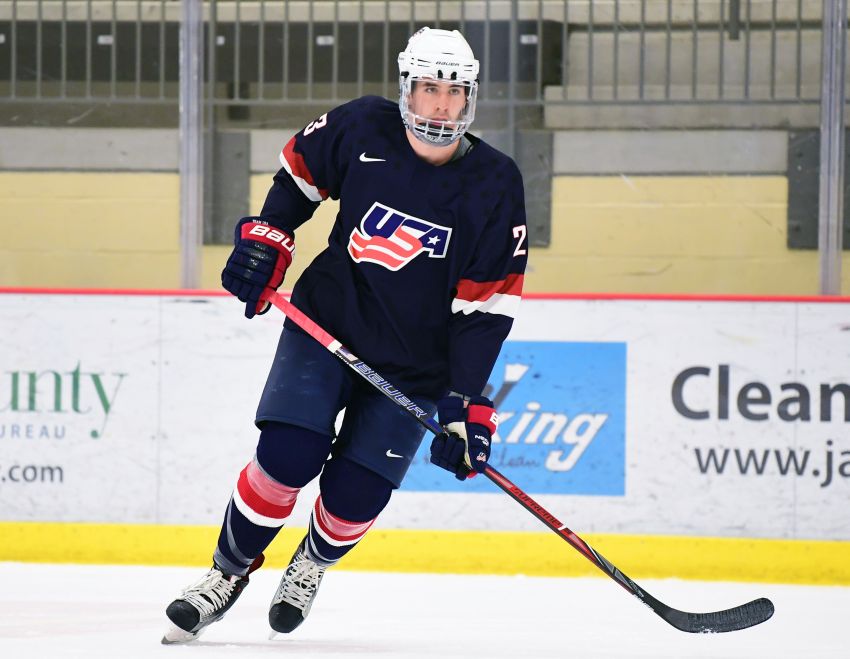 DALLAS – Like any prospect, Mattias Samuelsson wanted to be picked early. Some NHL Draft experts even projected the American defenseman as a first-round selection.

But after the first 31 picks Friday night, Samuelsson, 18, was still on the board.

“Everyone wants to be a first-rounder and everything,” Samuelsson said inside American Airlines Center. “It was a little upsetting, but coming into this I knew I was going to be called pretty quick here.”

Any disappointment Mattias Samuelsson experienced vanished. There’s no shame in being a second-rounder.

He plans to play at Western Michigan University next season, joining his older brother, Lukas, who was a freshman last season. Former NHL coach Andy Murray leads the Broncos, which helped lure Mattias Samuelsson to the school.

“He’s coached in the NHL, that’s where I want to be,” Samuelsson said.

Samuelsson knows all about the NHL from his father, who played 819 NHL games, mostly with the Philadelphia Flyers and Pittsburgh Penguins.

Sabres assistant general manager Randy Sexton believes any bloodline is significant. He said prospects who have a family member with NHL experience possess a “true and deep understanding of what it takes to play” and remain at hockey’s highest level.

“They really do have a competitive advantage over some of the other players,” he said.

As the Sabres interviewed Samuelsson and learned more about him, Sexton said they noticed the youngster’s maturity, character and leadership traits.

Of course, Samuelsson’s father, a player development coach with the Flyers, has played a major role in his development.

“He’s still in the business now, so whenever he could talk to me about anything, give me some points, he was there,” Samuelsson said. “He knows what gets me rattled, he knows what calms me there. He’s always there for me. It’s (great) to have somebody like that by your side.”

“He was a big, big, defenseman,” Mattias Samuelsson said. “He definitely taught me to stick up for myself and how to use my body to my advantage and just not back down, don’t be afraid to play your style of game and use your size to your advantage.”

Samuelsson doesn’t believe he possesses a major flaw. Still, he understands he has a long way to go – “I’d like to work on everything,” he said – before he reaches the NHL.

“I play a two-way style, move the puck up north, good defender and just play in any situation,” he said.

“I can just imagine those two playing together, Mattias will definitely lock it up defensively and shut down and allow a guy like Dahlin to have a bit of freedom,” Wilde said.

While Samuelsson is from New Jersey, he used to spend his summers in Sweden, where his father grew up. He even spoke Swedish fluently for years, although he said he lost the ability. His mother is from Pittsburgh.

“Sam had a great second half,” he said. “Our discussions with (agent) Craig Oster have been positive from that standpoint.”

After a miserable start, Reinhart compiled 25 goals and 50 points in 82 games last season.