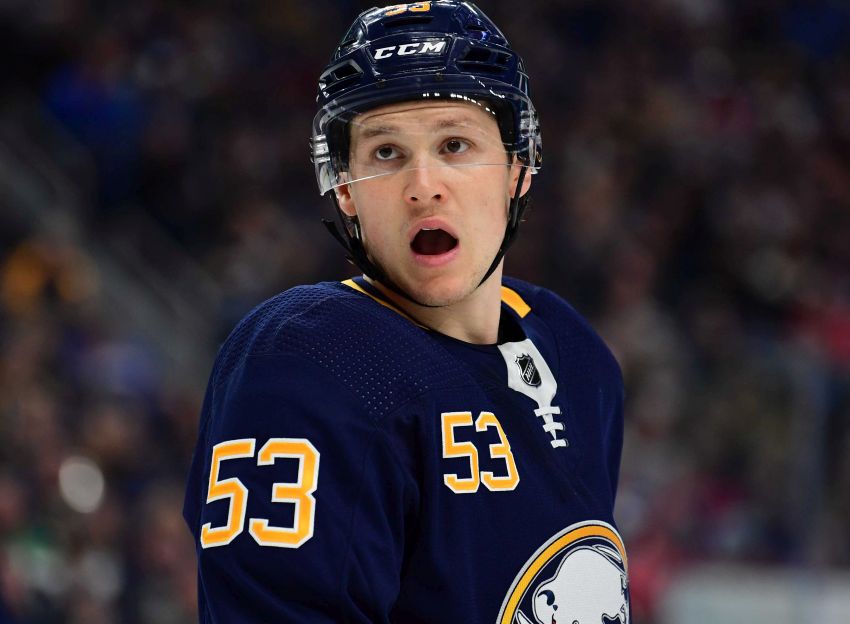 BUFFALO – Right away, the fans noticed Jeff Skinner’s unlikely presence. So when the Sabres’ leading goal scorer touched the puck seconds into the third period, the crowd roared.

Less than five minutes into the second period, Carl Hagelin put his stick around Skinner’s lower left leg, causing his ankle to bend awkwardly as he fell to the ice.

The NHL All-Star clutched his knee and writhed in pain for a good minute. He tried crawling to the bench before two teammates helped him off.

The crowd fell silent watching what appeared to be a grim situation.

“There’s a lot of things going through your mind,” Skinner said. “I think at first, you’re kind of just wondering what’s wrong with it.”

In the end, nothing was wrong. As the Sabres built a 3-1 lead, doctors examined Skinner and ran tests.

Following the second period, a surprise awaited the Sabres.

“You see him kind of walking around periods, I’m sure that was huge for the morale and I’m sure it relaxed the crowd a little bit,” said Sabres winger Sam Reinhart, who recorded his third career hat trick.

Then Skinner stunned the capacity crowd of 19,070 by starting the third period.

“You never know what’s going to happen,” Sabres coach Phil Housley said. “But reports were that he was going to come back for the third period.”

The 36-goal winger heard the crowd’s reaction as he skated into the Washington zone.

“That was pretty cool,” Skinner said. “Obviously they’re paying attention to the game, which is nice to see.”

The Sabres pounced on the reigning Stanley Cup champions early, opening up a 2-0 lead by the 12:51 mark after Reinhart and Jason Pominville scored.

Whenever the Capitals pushed back – they moved to within one goal twice – the Sabres responded.

“We didn’t let it affect us,” Housley said. “We know that’s a very dangerous team. I thought at times we let guys get to the open (ice), but for the most part, we were pretty solid in our checking detail.”

The genesis of Saturday’s victory started Thursday in Tampa Bay. While the Sabres lost a 2-1 shootout, simply playing well and taking the NHL’s best team down to the wire generated some confidence.

“You don’t want to have to rally around a loss, but the position we were in and still are in, it took that effort against a team like Tampa,” Reinhart said. “It (was) really important for us to follow it up against another one of the best teams.”

Housley added: “I just like the urgency and the desperation in our game right now.”

After Alex Ovechkin’s second-period goal narrowed it to 3-2, the Sabres responded, getting a power-play goal from rookie defenseman Rasmus Dahlin.

Shortly before Dahlin scored at 19:29, he broke his stick and quickly received a new one from the bench.

The stick, however, wasn’t quite ready for game action.

“There wasn’t any tape on the stick,” Housley said.

“That’s the type of player he is,” Housley said of Dahlin. “He can make adjustments on the way.”

Sabres goalie Carter Hutton has made adjustments over his last two outings, showcasing his early-season form following a rough stretch.

After Thursday’s 39-save effort, Hutton stopped 31 shots against the Capitals.

“He was solid again, not much going on after the shot was delivered,” Housley said. “He’s fighting for the puck in traffic, trying to get a squeeze on it.”

That aggressiveness tells Housley that Hutton is zeroed in.

“He’s attacking it,” Housley said. “He’s got that focus right now that he’s going to stand big and stand tall. His last two games have been really, really exceptional.”

“I just try to compete,” Hutton said. “There’s lots of things I can and can’t control, and I think that something I can control is my attitude and my compete level.”