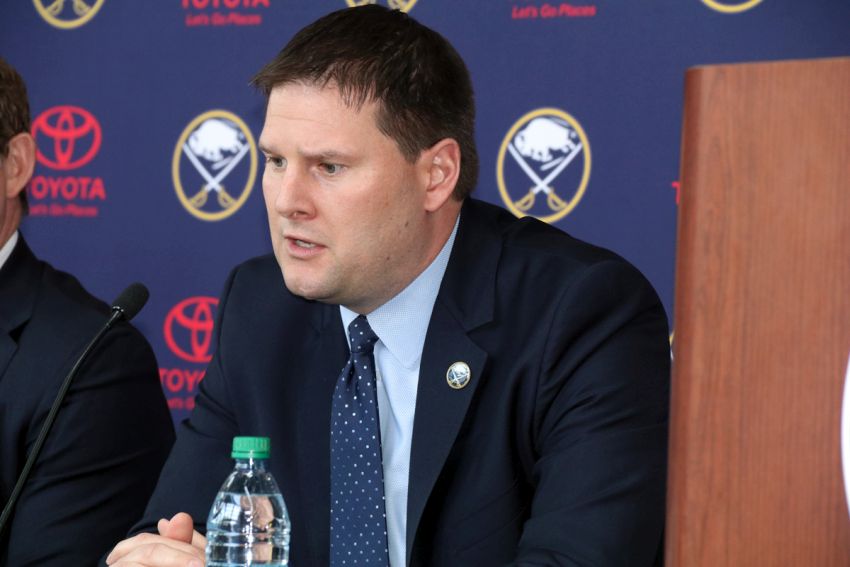 Jason Botterill brought in four new players who have contributed to the Sabres’ success. ©2019, Janet Schultz

BUFFALO – Seven wins in their first nine games have positioned the upstart Sabres among the NHL’s early-season elite.

Few expected the Sabres, who earned just 16 points over their final 33 outings as they imploded last season, would turn things around so quickly.

But how much has coaching – the players clearly respond to Ralph Krueger – impacted the Sabres’ shocking 7-1-1 start?

“Certainly Ralph has brought in a clear message and has done a great job in communicating with our group – at times one-on-one, at times in groups of three or five,” Sabres general Jason Botterill said this morning inside KeyBank Center. “But I also think our players have been very open to it. They’ve been engaged with him since Day One.

“You look at, whether it’s our veteran players with our goaltender, Carter Hutton, or a player like Marcus Johansson coming into our group, or our young players such as (Rasmus) Dahlin or (Casey) Mittelstadt, they’re engaging with our coaching staff.

“It’s the start of the season. Although our record is our record, there are mistakes all over the place out there. The fact we had that dialogue, had that communication to rectify those, I think is good and I think the focus right now continues to be, ‘Hey, how are we getting better each day as a team?’”

Botterill said Krueger “has come with a clear message for what he’s looking for from our players.”

“Our players have been very open to receiving that message,” he said. “They’ve certainly put the time in during the summer. I think the things that we challenged them on last spring, they’ve taken to heart.”

Botterill, who hired Krueger after a six-year hiatus from the NHL, said he can see “he certainly loves his job right now and loves being back behind the bench.”

“But he’s also very truthful with these guys,” he said. “When things aren’t going the right way or when he sees something in practice or the game that’s not being done to our standards he’s going to correct it. The way he’s communicated with the players has gone over very well with the players and it’s been a good relationship there. As a whole, yeah, it’s been a positive start.”

Check back later for more from Botterill.

Hutton is 5-2-1 with a 1.74 goals-against average and a .945 save percentage in eight career games against the Sharks.

– The Sabres have scored first in eight of their nine games this season.

– Eighteen Sabres have already recorded a point this season and 12 have scored a goal.