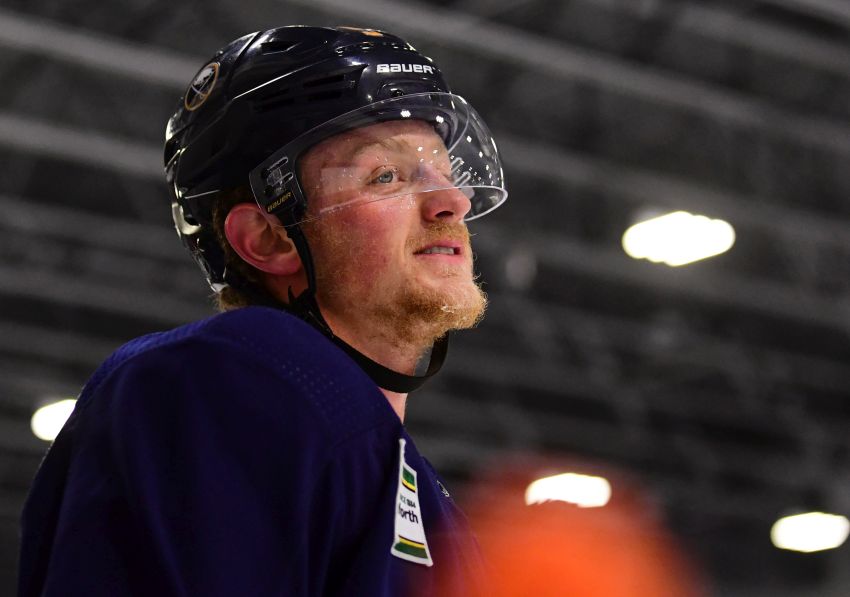 So Eichel, 21, left his dinner and drove to KeyBank Center. When he arrived, Housley, general manager Jason Botterill and owner Terry Pegula told the talented center he would be the 19th full-time captain in Sabres history.

Housley said Eichel, who’s beginning his fourth season, “represents everything we want as far as our organization goes.”

Many observers, of course, expected the Sabres to award Eichel the prestigious ‘C’ this season. But in the recent past, it seemed like he might not be ready for the honor.

Eichel famously pouted after the Sabres ended a disappointing 2016-17 season. Even early last year, as the team endured perhaps its worst season ever, Eichel occasionally sulked on his way to the bench during games.

But Housley, whose Sabres open the season Thursday against the Boston Bruins, has watched Eichel grow since last season’s wretched 31st-place finish.

“We felt – Jason and our coaching staff – that Jack has made the right steps in his maturity and I think he’s right captain to lead our franchise,” Housley said.

Housley said picking Eichel was difficult because the Sabres’ leadership group has made such “tremendous strides” since last season.

In addition to collaborating with the coaching staff and management, Housley said he and Botterill talked with just about everyone – the equipment managers and the high-performance and training staff – around the players.

Housley said he sees a change in the way Eichel carries himself day in and day out.

“I think it started after last season, the things he said to the media and just his growth through the summer and coming into camp,” he said. “He wants to win, he’s a tremendous competitor and I think he’s going to try to do everything in his power. But a sign of a good captain is asking for help.”

But Eichel, whose eight-year, $80 million contract kicks in this season, said he matured. The constant losing changed him.

“I’ve taken a few years and went through some stuff you don’t want to go through in your career,” said Eichel, one of four alternate captains last season. “A lot of people say you need to learn to lose before you learn to win. I had never been on a losing team before until the last few years. It was something new for me and just trying to get to the bottom of it.

“I think the organization’s done a tremendous job of giving so many good resources and really doing their best to change this thing. I want to be a piece to that and a pretty big piece. Along with a lot of other guys here, we feel pretty strongly about making the change from within the locker room. We think we have the group of guys to do it now.”

Like most coaches these days, Housley stressed the Sabres want to have leadership by committee. The coaches selected defenseman Zach Bogosian and winger Kyle Okposo as alternate captains.

“We have a good group and we’re continuing to develop and continuing to get better,” Eichel said. “But I like where we’ve been after camp. I think the overall morale and the room itself is changing and heading in the right direction.”

Check back later for more on the captaincy, which had been vacant since winger Brian Gionta left after the 2016-17 season.

– Housley said Bogosian, who’s day-to-day with a lower-body injury, skated on his own today. He doesn’t know when he could start practicing.

– Housley on Remi Elie, a winger the Sabres claimed on waivers from the Dallas Stars on Tuesday: “I’m excited about Elie. He’s a tenacious forechecker, he can get on the forecheck, he finishes checks.”

Elie practiced today as a spare forward. He will likely be a fourth-liner when he plays. While Elie only has seven goals and 21 points in his 90-game NHL career, Housley believes he could provide some secondary scoring.